Billy Beer is nothing if not dedicated. And even when he heard that the premiere for Unbroken was cancelled he still made it out to another event. Yep, he went to see Ms. Emily Blunt and Lee Pace.

Welcome back to Billy Beer’s Barstool. So a couple of weeks ago, I decided to take a Monday off for the Premiere of Angelina’s new movie Unbroken. Well, you might know where this story is going. A few days before the Premiere, it was announced that Angie had the chicken pox and was not going to be able to attend. Then it was announced that Brad would still be going, and that was fine by me. I had a number of cast pieces I needed to add him on (Inglorious Bastards, 12 Year Slave, Fury). So I’m on my way, when I get the update that the Premiere is inside the theatre, and there is no access what so ever………CRAP!!!!!!

Welcome back to Billy Beer’s Barstool. NOW we are off to get Lee Pace and Emily Blunt. Lee is promoting The last Hobbit movie, and Emily is out promoting Into the Woods. Now I’ve been told Lee is on the tougher side, although he seemed quite nice at The Hobbit premiere. Emily was once one of the nicest celebs out there, but as of late has been tougher. I brought my Guardians poster, and a few things for Emily. Let the adventures begin.

I get there early due to the fact I was going for something totally different. When everything is said and done, I have a nice spot right in the middle of the barricade. Emily was the first to arrive. After a lot of yelling, she finally turns around and gives us a wave. After a bit of time we see another arrival. It was a tall guy from behind. We all start yelling LEE, only to finally figure out it was Emily’s husband John Krasinski. OOPS! He goes inside. Finally Lee arrives. We all scream for him too, but barely get a turn back.

It’s around that time for exits. Lee is the first one to come out. He makes his way over. The guy signed like a machine! It’s not the greatest graph. It’s about as simple as the Chris Pine “CP” you get now, but he’s signing for everyone and taking pictures with a few die-hard Hobbit fans. 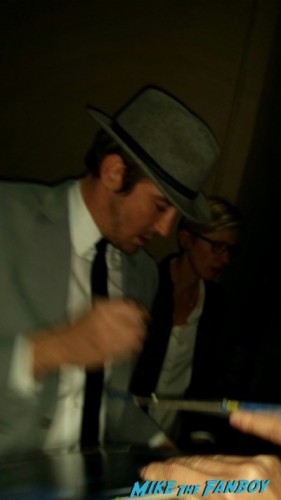 While he’s signing, we spot Emily and John leaving. We start yelling, and I shit you not, John gets as close to the fence as he can to not be spotted, and Emily is actually hiding behind him! Now this alone would of shocked me if she hadn’t done the exact same thing the last time she was here. Seriously? Two times in a row! I am a big fan of Emily and John. I would support their shows and movies because of how nice they have been in the past. Emily was one of the first photo-ops I ever got, and she couldn’t be nicer. What has happened to these two? And before people star jumping down my throat, I don’t expect everyone to sign all the time every time. I don’t feel like they owe me anything. All I am saying, is they used to be 2 of the nicest celebs to their fans. Over the past year or two, something has changed.

What some of these actors and actresses don’t realize is that word of mouth is the strongest form of advertisement. Fans are more willing to support a project they are doing if they if they have positive encounters with them. Look at Unbroken, before the chicken pox, Angie was out interacting with fans, signing autographs and taking pictures. Do you know how many people in LA were upset that she didn’t get a People Choice or SAG award nomination. A lot of that was because she was so nice to the fans. They hadn’t even seen the movie, but they probably will! Unless Anna Kendrick is out being super nice (cause I love that girl), I will probably not go see Into the Woods because of the other stars like Chris Pine and Emily ignoring their fans promoting the movie. 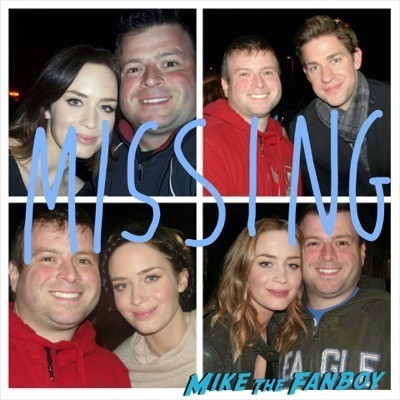 Again, they don’t have to do anything for me. Just like when you go to a restaurant, you don’t have to tip. But you usually do. Sometime you even tip extra and when you do, the next time you come in, I bet you’ll get better service from that server if they remember you.

There’s my rant, I just miss the old Emily and John.