I’m going to put it out there that I’m actually old enough to remember watching the original G.L.O.W. (Gorgeous Ladies of Wrestling) when I was growing up as a teenager. I even had a crush on Amy, The Farmer’s Daughter and thought Spike and Chainsaw were some scary as shit with their crazy silver and black face makeup. It was campy with exaggerated drama and over the top “performances” from the girls but sometimes it was even better than whatever WWF(now WWE) matchup was that week. The GLOW girls went all out every time while oftentimes the other wrestling shows tried to keep it more of a serious tone with more complex and emotional storylines. Now as a kid growing up it was all great entertainment for me but I was definitely really bummed out when the show finally ended. Back then without internet (yes, I’m REALLY dating myself) I didn’t know what happened to the show—it just stopped airing. I’m only bothering to take this trip down memory lane to give some context for when I heard that Netflix was releasing a new version of GLOW—I was pretty damn excited! 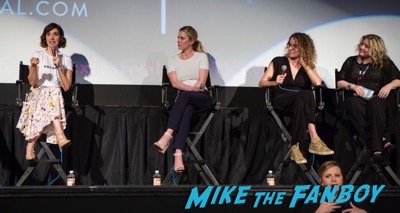 This version is created by Liz Flahive and Carly Mensch, two former producers from Nurse Jackie, and Executive producer from Orange is the New Black Jenji Kohan should make you feel really safe about a female centered ensemble show. The story takes place set in 1980’s Los Angeles as struggling actress Ruth Wilder (Alison Brie) convinces a casting agent to give her a chance on pretty much anything so the agent sets her up with a project seeking “unconventional woman.” Now Ruth not knowing what this is goes into the audition thinking it’s a normal dramatic acting role. I guess you could say it is? What she insteaddiscovers is it’s an audition for a professional women’s wrestling outfit with a smoking, snorting, and sexist director named Sam Sylvia (Marc Maron) steering the ship. Now most of these women have no idea what they’re even in for but there’s a select few that stick around. 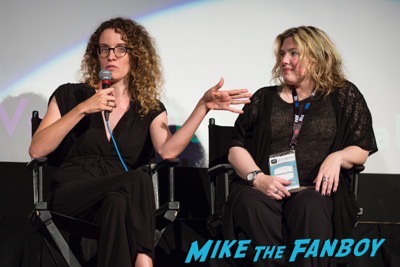 And this where the show starts getting fun because we get that wonderful montage of each girl introducing herself to Sam and having those brief but quirky moments that are giving the audience their first look at them as well. And that’s the best thing about this show is the collection of unique oddballs that make up the wrestling group. They all have their distinct traits that sets them apart from each other. There’s the nerdy Lauren Lapkus-like Indian girl Arthie (Sunita Mani), the headstrong African-American actress Cherry Bang (Sydelle Noel), the full on gothic Sheila (Gayle Rankin) and the Asian Valley Girl Jenny (Ellen Wong). I only bring up all the races of the characters to point out that not only is this a great show lead by female characters but the producers made sure thatthere’s a wide range of ALL different kinds of women which is definitely rare on television. When they actually start training the girls to learn the moves in the ring the show turns into a Bad News Bears version of wrestling. The women are clumsy and awkward and struggle to understand what they’re even trying to do. But that’s where it’s so endearing and you fall for these characters. These are blue collared women with heart (except for maybe one of them) and they are giving it their all to try and please their director Sam Sylvia even though they aren’t even sure how they’re supposed to do it. 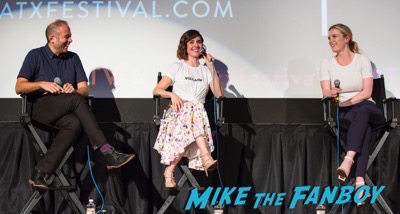 Speaking of Sam, he is about as far from all heart compared to the women. He has the old Hollywood stigma of the era of talking down to women and just sees them as objects for his project and to try and make money in the end. If you know who comedian Marc Maron is then nothing in this performance surprises you as cadence of speech and lackadaisical manner are very similar to what you’ve already seen him do before. But the point is he nails it perfectly and is highly enjoyable even though he’s as close to a chauvinistic pig as you can get. Alison Brie comes out strong as Ruth in the first episode which she has to carry a lot of the weight for in order to get the show moving but going on to the second episode she falls right in with the other girls and gels right in with the team to make it a strong acting ensemble. Brie has the tough job of playing the cliché struggling actress bit but without coming across as whiny or pathetic. She stays determined and focused even in the moments of despair when she’s calling her parents for money or getting mugged by elementary school kids (yes, that somehow happens).Brie has always been easy to love in all her previous projects because she has that relatable quality that she’s not trying to be the best actress you’ve ever seen, she just wants you to be invested enough to follow along with her. But Ruth is not a perfect person either. She has flaws that help make her a fully rounded out character even though you have to question the bad choices she makes in regard to her friendship with former soap actress, now new mother, Debbie (Betty Gilpin). But coming from a story aspect her actions have an integral part on moving the show forward. 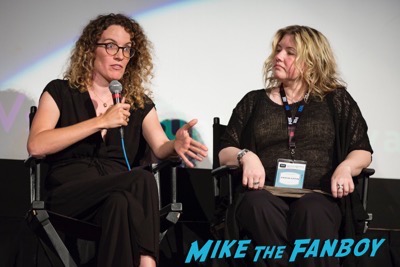 In the end the first two episodes I watched with ease! Not only because it’s a thirty minute show but the desire to see these women succeed compels you to keep watching in the hopes for them to bond and grow together in the end. Or maybe I’m just a sucker for all the throwback 80s music that keeps getting played? Well both reasons are enough to keep watching!