It’s the final premiere of the year!

Doh! As 2013 draws to a close, you have to take advantage of the premiere’s we have left right? Billy Beer headed down and I joined him a little later. I hate this venue when it comes to premieres. The space is so so so small and it makes everything so jam packed.

We file in and even thought I’m only like 12 in line, I’m still second row behind the ubiquitous Billy Beer. The Other Mike just showed up, and for the next few hours will regale us all with tales of crusty bodily fluids, random sex acts, and other fun tidbits we didn’t have yesterday.

The carpet is super small and only has a few posters tossed up with a carpet. Damn…

The hours feel like days, here’s what I hate about being second row… You can’t really leave or someone takes your spot, you have to hold all your shit and can’t tie it up, etc…

Sigh… Still, at least my surrounded by some cool people. 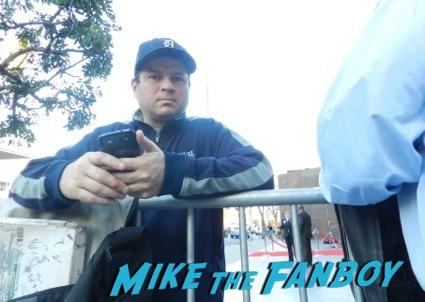 On the list for today is Amy Adams, Rooney Mara, Joaquin Phoenix, Olivia Wilde, and Spike Jonze. Scarlett isn’t here and there are a few people on the guest list, but who knows who will actually show up.

So, I have tons of things for everyone, and I have the worst luck with Amy Adams. Seriously. I have this stack of magazines and I haven’t been able to get any of them signed. It’s sort of killing me. 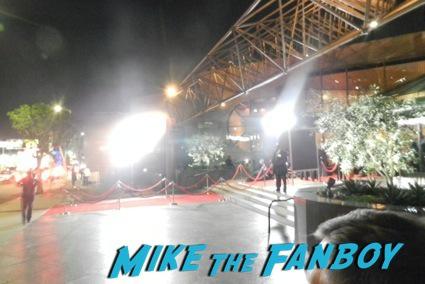 After a few more hours of The Other Mike talking about genitals and forbidden love the sun sets and time is getting close. It’s odd, it’s like the hour that time stands still… Nothing is happening and yet.. Time will not pass. Every minute seems like a half hour. 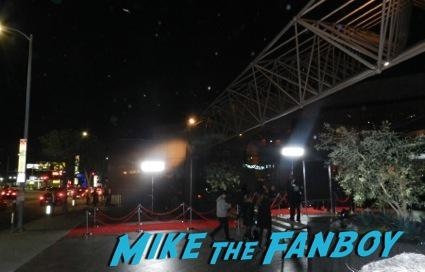 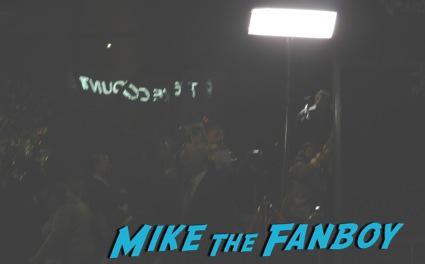 The first arrival. A guy named Adam, and he refuses to come over. Nice! Boding well!

A few randoms show up but no one interesting.

Finally, and when I say finally, I can’t emphasize how much I mean… Finally!

Joaquin Phoenix arrives. I have a Parenthood laserdisc for him and a Her mini poster. Suddenly, it’s madness, I get pushed, shoved, my God… Joaquin Phoenix is really cool.

He started at the end and then signed and skipped around but I somehow managed to get him on my Her mini poster. 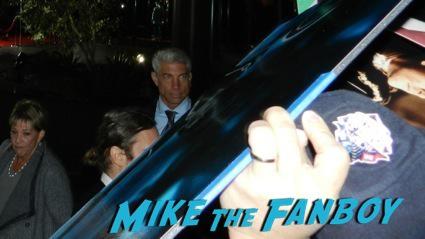 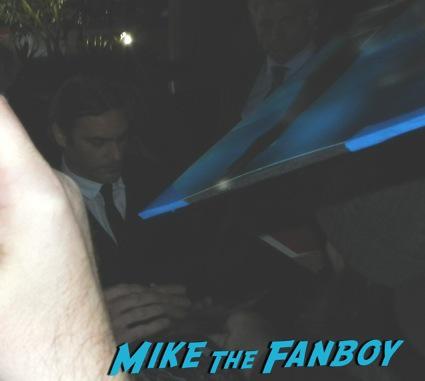 At the same time, Olivia Wilde showed up. She comes over to sign and skip my mini poster. I think she thought of that before she came over, “I have to make sure and skip Mike’s Tron mini poster but sign some random stuff” whatever Wilde! I’m only slightly irritated.

Then Amy Adams’ publicist comes over and says that Amy ran into traffic and isn’t going to have time to sign…. And my streak continues. 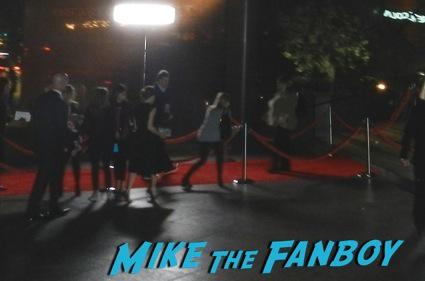 And here’s the thing, I actually appreciate the fact that she told us that. I think it shows fans some respect and at least it acknowledges everyone waiting, even if she did probably have time to do it. I at least give the publicist and Amy props. 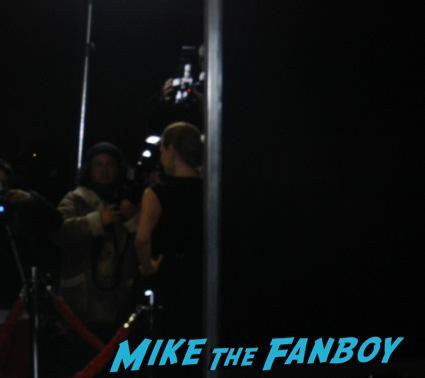 But it sucks my streak continues.

And after Amy, Rooney Mara arrives. She goes right on the carpet but her publicist says she will come back to sign. Sigh…

And now… We wait.

It’s frakkin cold… and when I say cold, I mean, I want to go home cold.

After about another 30 minutes Olivia Wilde leaves and won’t sign.

Spike Jonze is leaving and is really cool. He comes over and signs. He personalizes everything though, I don’t care that it’s personalized but I hate cast posters personalized. Ah well. It was nice of him to do it. 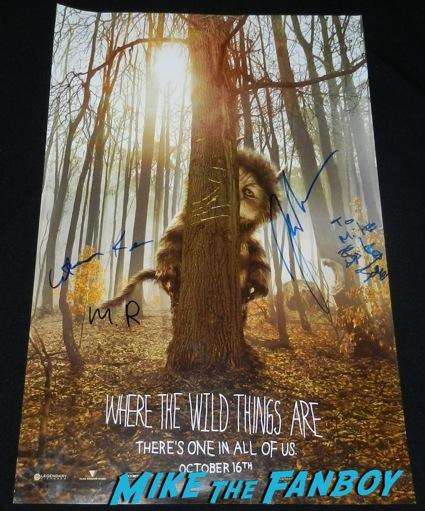 And then Rooney Mara leaves and comes right on over. 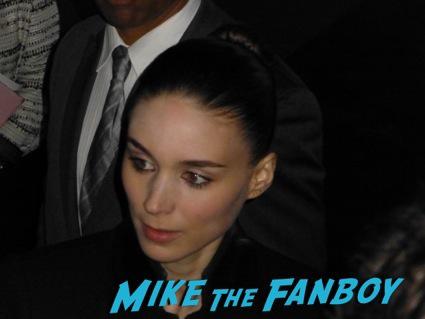 She’s pretty nice and signs down the line. I have my The Girl With The Dragon Tattoo mini poster Daniel Craig already signed and a couple magazines. 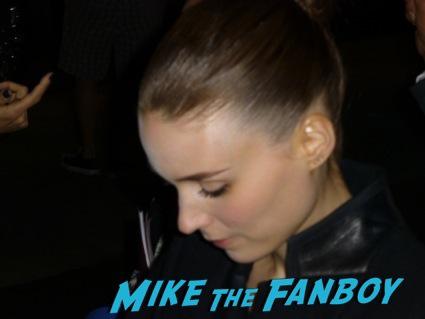 She signed my mini poster and I tried for the magazine but it was a total no go. 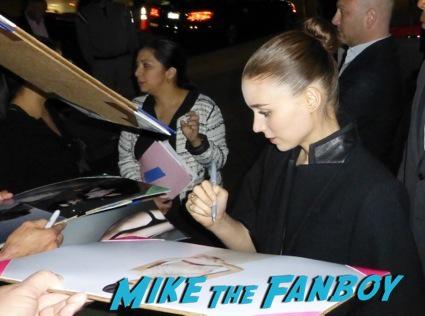 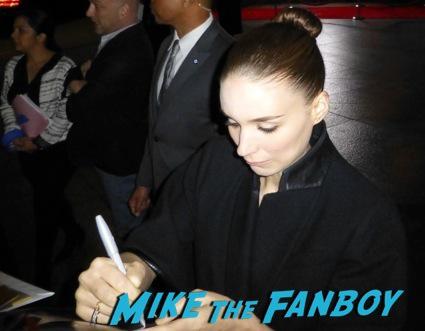 Oh well… I’m very happy I finished the mini poster, The Girl With The Dragon Tattoo was one of my favorites of 2011 so I’m excited to finally finish it! 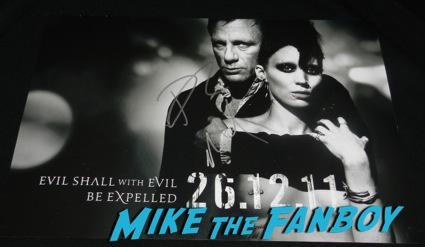 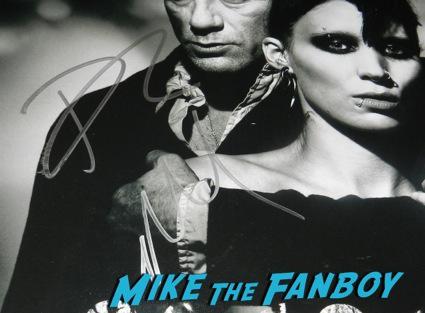 Was it the best night ever? No, but at least I got a few things signed and I finished a cast poster, so that makes me happy. 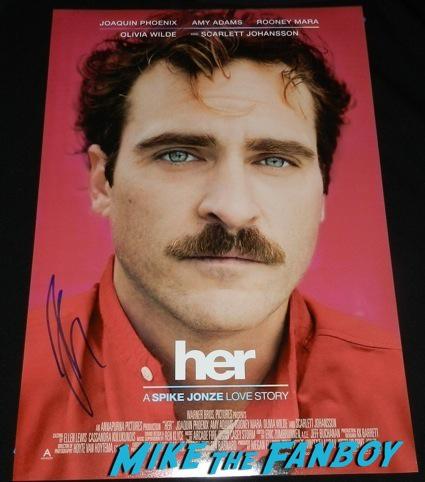