James is back to torture me, I mean share his latest UK adventure at the Hunger Games: Catching Fire premiere. He got pretty much everyone, except for one Effie Trinket… LOL…

Gosh, it just seems like premiere’s are so much calmer on that side of the pond!

Ah, you know, sometimes there are premieres that you absolutely can’t wait for, but they turn out to be a bit of a failure. Or even if they’re not a failure in the slightest, a feeling of indifference. and let me tell you, I hate that feeling (cough Anne Hathaway at the Les Miserables premiere, indifference from what should’ve been the best premiere I’d been to). I was really worried that the premiere of the Hunger Games: Catching Fire would be along those lines, so much so I spent most of last week convinced I wouldn’t go. Two reasons: firstly I’m currently working, asking for some time off for Jennifer Lawrence isn’t the best sounding idea. Plus, my first Hunger Games premiere was so ridiculously good (first premiere I actually had a ticket for, walking the red carpet for the first time, oh, and being one of the only people to get a photo with Jennifer) that I didn’t see how this could match. 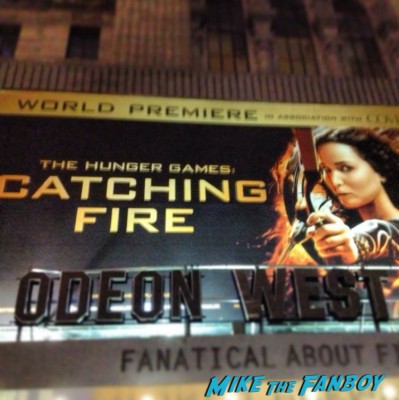 However, Monday morning came, and I decided I’d bite the bullet and ask to leave work early. No problems there, I’d be off to Leicester Square. Then, close to midday I got the best email ever; “I’ve got a spare, do you want a ticket to the premiere?” hell yes. So, after the slowest 3 hours of work in history, I headed off to Leicester Square, met my friends at the red carpet (big thanks for the space saving Paty!) and waited for the start. 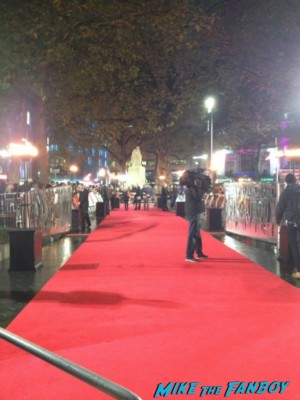 The guestlist promised a rather special evening: Jennifer Lawrence, Liam Hemsworth, Josh Hutcherson, Sam Claflin, Donald Sutherland, Stanley Tucci, Elizabeth Banks, Jeffrey Wright, Willow Shields, Jena Malone & director Francis Lawrence. Bonkers really. It’s hard to keep this in exact order as the order in which people arrived differs from the order in which they got to us – the set up was absolutely huge, and there was a good 30 minutes from the first drop off to the first person getting to where we were waiting. All the press, photographers and a fair few fans were before where we were. So I’ll do it in order of people getting to us.
First to come into vision was one of the 3 people I most wanted to meet – Stanley Tucci! He didn’t seem to be signing many, but when we called for him he came straight on over, and kindly signed an index card for me. Whilst Stanley is probably best known for his Oscar nominated role in The Lovely Bones, The Devil Wears Pradais a guilty pleasure of mine, so it was great to finally meet Nigel! 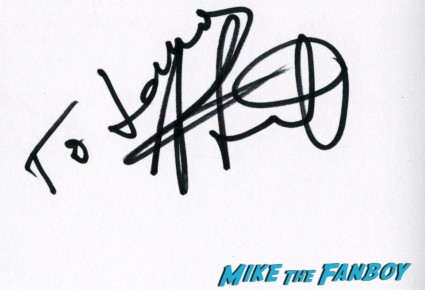 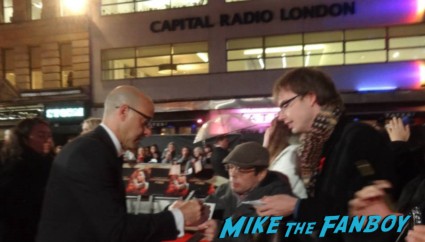 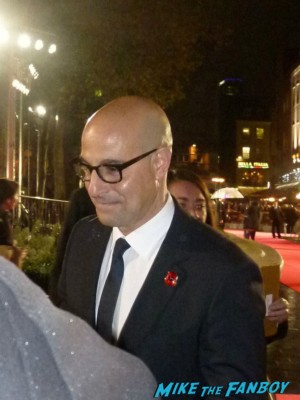 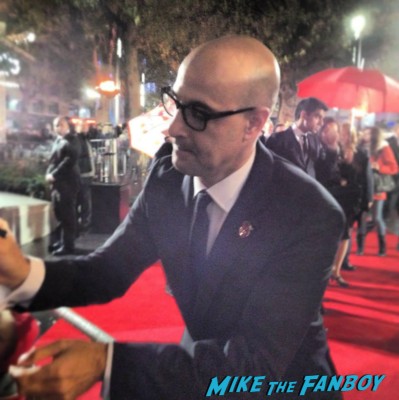 Stanley was followed by Willow Shields, who plays Prim in the films. She was lovely, and happily signed an index card and posed for a photo with me. 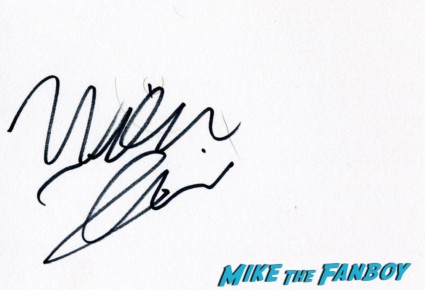 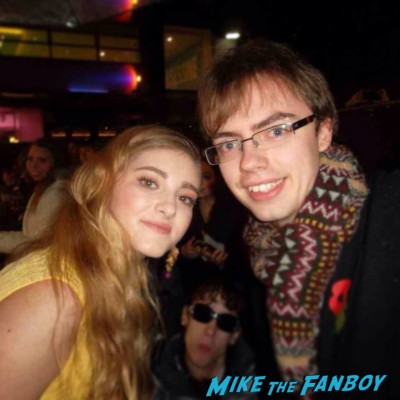 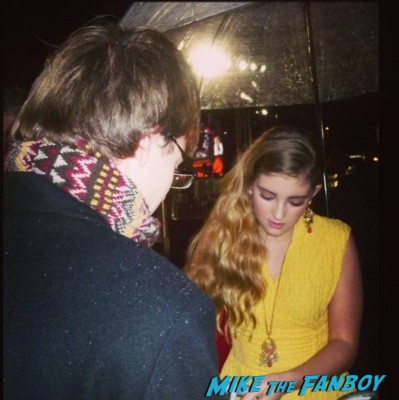 The second of the three people I wanted to meet was close behind, the legend that is Donald Sutherland! When the guest list was announced for the premiere his name stood out by a mile for me – the prospect of  meeting him was pretty awesome. I didn’t expect him to sign much, especially after he had walked offstage mid-interview about 10 minutes earlier(!), but he couldn’t have been nicer, signing my autograph book for me. He wasn’t signing the best signatures I’ve seen, but it’s still him and I’m very happy to have met him. 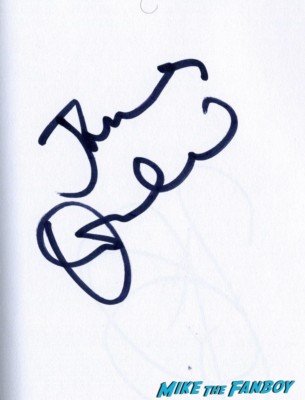 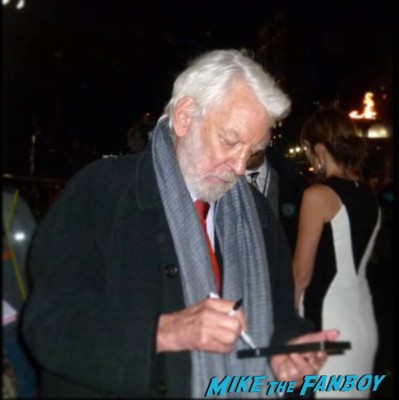 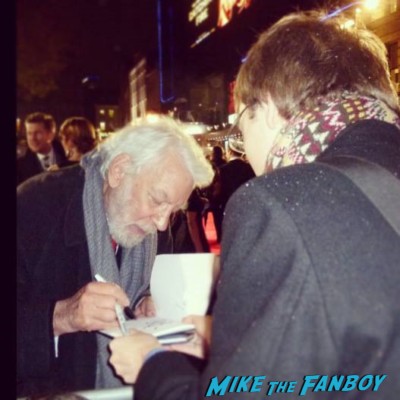 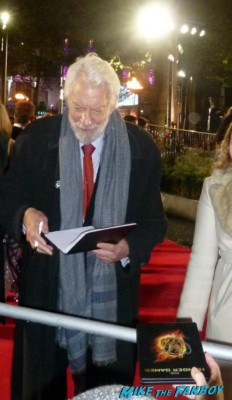 Jena Malone, who plays Johanna in the film followed next, but just walked past saying sorry she was late and had to rush in. Um, what? The three main names weren’t in and the film wasn’t due to start for another 30 minutes. I get it if you’re cold and don’t want to sign, but don’t lie, especially as we then think the rest of the cast won’t be signing either! However, such worries were unfounded. Gale aka Liam Hemsworthfollowed a couple of minutes later and was fantastic – I genuinely think everyone in Leicester Square that wanted an autograph got one. He signed an index card for me and posed for a photo. One thing I will say, the Hemsworth brothers are great guys and know how to treat their fans properly. 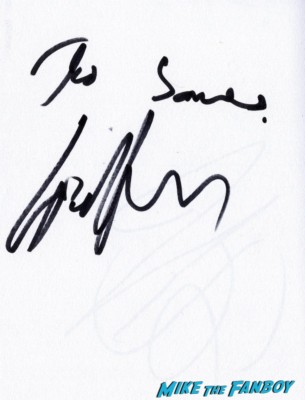 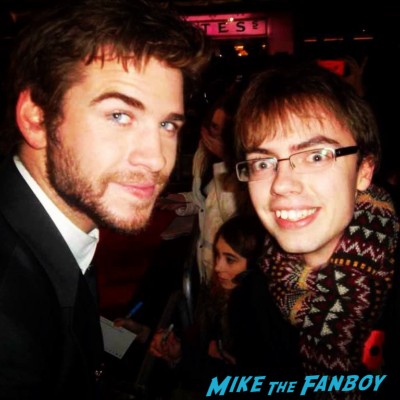 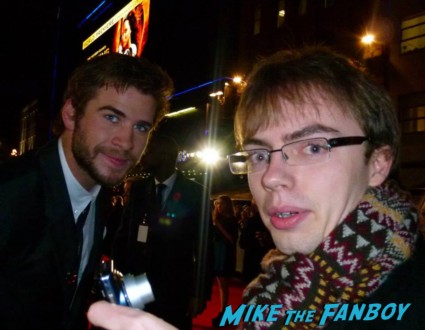 Elizabeth Banks came past next and reverted to usual form by ignoring the fans. She had surprised (well, amazed) me at the last HG premiere by being lovely – I got one of the best premiere photos I’ve ever got with her, and she signed for literally everyone that day. Not today though, not even a wave!

Crap, just as we’re watching Elizabeth ignore us, Andy Serkis is walking by. Gollum!! I call him and he comes straight over, signs an index card and poses for a photo with me. Finally! I must’ve been the only autograph collector in London to have never met Andy before, so it was a great surprise to get to meet him here. Gollum at the Hunger Games, so random but brilliant! 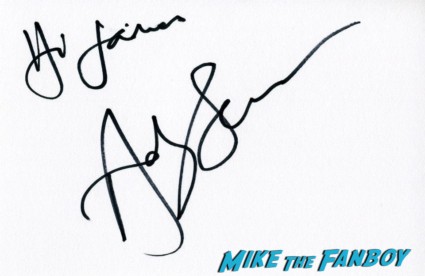 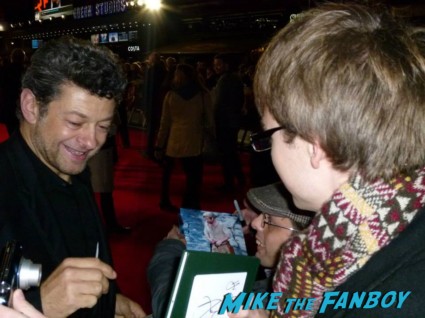 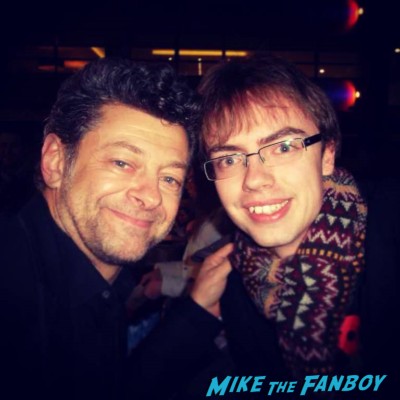 For the last 10 minutes or so, Jennifer Lawrence‘s head has been coming in and out of vision a fair distance away as she does interview after interview (including the best onstage interview I’ve ever seen, “wow I just found two Mentos in my pocket!”, go find it on youtube!). She’s finally coming in our direction, but not signing! This is a joke right? Thankfully, she realises I’m her #1 fan and starts signing just before where I am, but going by the speed at which she’s going it’s more like a mark-on-the-paper rather than a proper autograph, which I really don’t want on the lovely Silver Liningsphoto I have. So I get out an index card instead, and ask her to dedicate it to me. She apologised and said she can’t to save time, but I do get a half decent signature rather than the line she was putting on a lot of things. She told someone a little down from me that she couldn’t stop for pictures, so I didn’t ask. I’m still happy though that a) she signed, and a nice signature too, and b) that I was one of only 4 or 5 people to get a photo with her at the first HG premiere last year! She’s still my favourite! 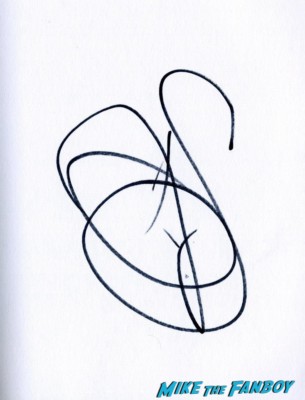 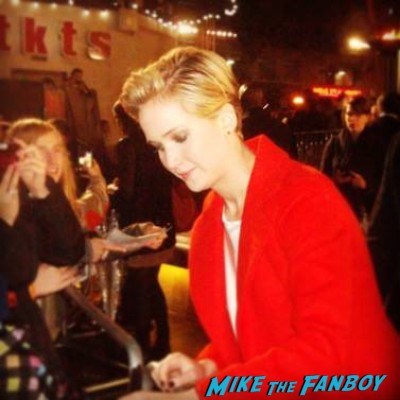 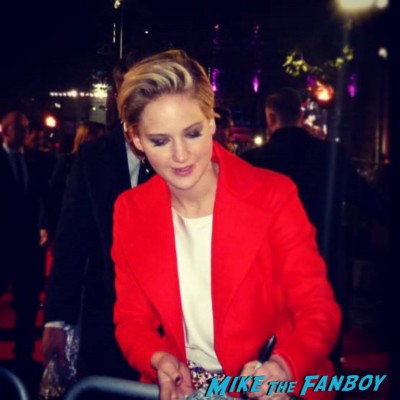 Jeffrey Wright, best known for his role in Casino Royale and Quantum of Solacefollowed, and signed an index card for me. 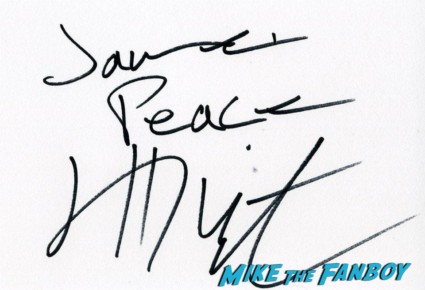 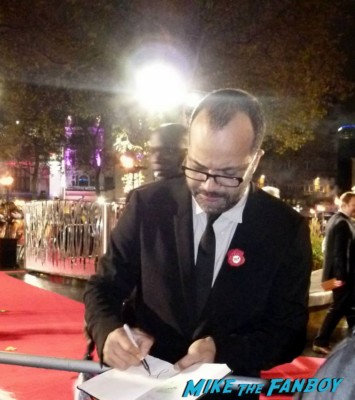 and that left only Josh Hutcherson to come, he was cutting it fine if he was going to be signing. He came by, and unsurprisingly, apologised for not being able to sign, whilst being moved along by a bundle of PAs, so I believe him, unlike Jena. Turns out I actually forgot about Sam Claflin, but having met him 4 or 5 times before, I’m not that worried! With that me & my friend Helen headed into the cinema to watch the film, exciting times!

I won’t say anything about the film so as to not spoil it, other than it was awesome! Favourite actress + favourite band in one film = happy James. Especially when you’ve met said actress 20 minutes earlier! To end, just because it’s my favourite photo I’ve ever got, here’s me & Jennifer. Woop!! 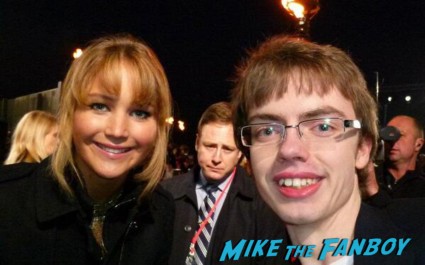