Oh dear… I can tell I’m going to be jealous of a lot of people over in London.

James has a recap coming up from The Hunger Games: Mockingjay Part 1 premiere, but first Chris has an awesome recap from his time at the premiere.

Chris had great recaps from the Divergent and Spider-Man premieres from Berlin, and of course he had a great time at Hunger Games!

The premiere was really big and it wasn’t that easy to get a good spot: you had to get a wristband to be able to stand at the red carpet, the wristbands had numbers and the fans got an opportunity to look for a spot at the carpet in order of those numbers. Obviously, first fans already camped out at Leicester Square two days before the premiere… I didn’t feel like camping out and got there to get a wristband at 6am on the day of the premiere. I still got an okay-ish number. When I got to the carpet, in most areas the first few rows where already filled with fans, but I found what I thought was a quite good spot – although not directly at the carpet, but right where the cars would stop and drop the actors off.

The first persons to arrive were director Francis Lawrence and producer Nina Jacobson. I didn’t see much of them though, neither came over to where I was, but I had already met Nina a few times and didn’t care much about getting Francis, so that was okay.

Now Julianne Moore arrived. She went to the press area first and then signed somewhere else. I could watch her posing for the photographers a bit, but she never signed close to me, although I know she signed quite a bit.

Jena Malone arrived. She was adorable, obviously in a very good mood, jumping up and down out of excitement shortly after arriving and she had a camera with her to take some photos at the premiere herself. She signed lots of autographs. I managed to get an index card signed and a picture with her, although that one didn’t turn out that great. I think she was really nice. 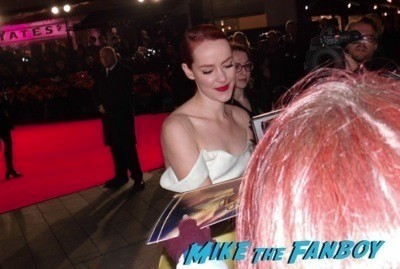 One of the next persons to arrive was Sam Claflin. He signed for persons to my left, but I couldn’t manage to get his attention. Luckily, I’ve had a nice encounter with him earlier this year when he was shooting in Berlin.

Natalie Dormer arrived and signed a bit, but she barely signed in the area where I was, so I didn’t get her.

Donald Sutherland arrived and signed about three autographs in my area before he stopped. So no, I didn’t get him.

I started hoping my luck would come back soon…

Elizabeth Banks arrived but barely even looked into our direction. I was surprised when I heard that apparently she actually signed a bit down the carpet.

Jeffrey Wright came over to us. He is always nice. I got an autograph.

While Jeffrey was signing for us, Liam Hemsworth got closer to us, but stopped as he got closer to Jeffrey to greet him and then didn’t continue to sign where we were.

Josh Hutcherson came over to us! He signed an index card for me with one of the best signatures I saw of from this premiere. He was really nice and signed a lot of autographs, he really tried to get to many fans. 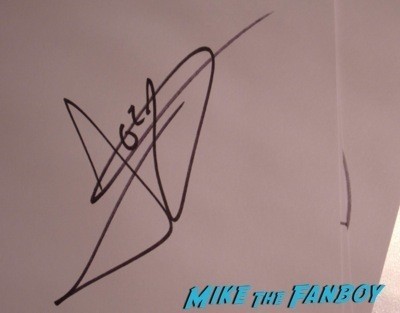 I was very happy about it, as I’m a fan of his but could never manage to meet him before this. 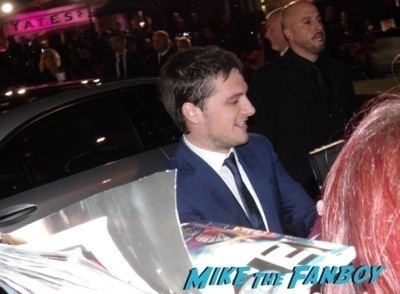 Jennifer Lawrence arrived! She’s definitely my #1 favorite actress and was the main person I wanted to meet. I never had much luck with getting her in the past, but I had hopes I would finally meet her. After getting out of the car, she first went to the press area to pose for the photographers. I could watch her a bit, she looked absolutely stunning.

After she was done with that, she started signing on the opposite side from us for a bit. 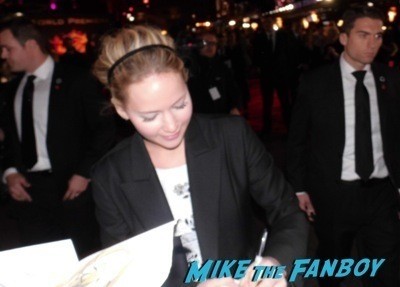 As she was done signing there, she came straight over to us! She started signing directly to my left! I got her autograph, although she only signed with a “J” that looked more like a scribble… She continued to sign down the line quickly. 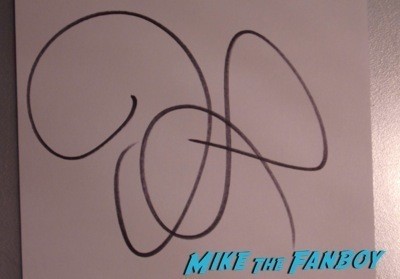 As she was finished signing down one side of the barricades, she came back… and guess what?! She came directly to us again and signed even more autographs for us! While signing for us a second time in one evening, she was even nicer then before. The autograph I got now was a much nicer “JL”. I told her that she’s my favorite actress. After that, she still continued to sign and sign… and sign… Seriously, she signed A LOT and really tried to sign everyone’s stuff.

And that was my experience at the premiere. I probably had a bit of bad luck here and there, but I finally met Jen and Josh and to be honest, everything else doesn’t really matter to me compared to that! Also, every day you manage to meet Jennifer Lawrence and she is being comparatively nice is a big success in my opinion.