Suddenly Susan had a great idea for a new column here at Mike The Fanboy… Jekyll or Hyde! This is for those times when a celebrity who is not usually nice is completely awesome or someone who is super sweet is downright nasty. I know we’ve probably all come across them in our travels, this hobby sure does bring out the best and worst in people.

So, to start the column off, Susan has written up Mr. Sam Rockwell. Now, Sam is not nice, at least when it comes to everyone I know… He’s pretty nasty.

But Susan, she had the magic touch!
Check out her encounter with this Dr. Jekyll after the jump!

And If you guys have some Hyde’s and Jekyll’s send them in! I would love to hear it!

Here’s an odd one. A friend and I attended a screening and Q&A with Sam Rockwell for the film Conviction. I had never heard anything about Sam as a signer. Neither good nor bad, so this was a blind taste test. Before the main film, we had to first sit through a mediocre film he made back in 1986 called “Box of Moonlight”. I’ve long been a fan of his work going back to “Lifestories: Families in Crisis” where he had to write a one dollar check every day for a year to the family of a girl a killed while driving drunk. Remember that one? Well, he’s had plenty of good stuff and bad stuff in between. “Box of Moonlight” one wasn’t for me, but for any of you who dig Sam in that carnal way, he has a full frontal nude scene. Any takers?

Sam was right there in the audience for both films with his girlfriend, parents, and a big smile on his face. Anyone else find it weird he had no qualms about showing his man stuff to the family? During intermission between films, we bolted to the lobby and caught Sam coming back from the men’s room. He graciously signed for us both. My friend at the time asked every celebrity who signed for him to put “David, you’re cool”. To my amazement, they always did, including Sam! I then asked him to sign an 8×10 from “Moon” for me. I am a huge fan of that movie. My friend was busy chewing Sam’s ear off, so I don’t think he heard me ask to make it out to Susan. No worries. He signed it, so I was happy. 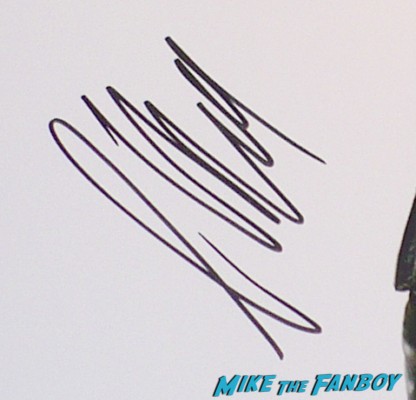 I mentioned the Lifestories episode, to which he said, “oh geez, yeah,” He then proceeded to take a photo with each of us. 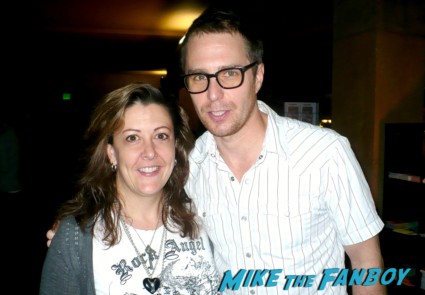 We watched Conviction and stayed for the Q&A and left happy. If someone asked me what kind of signer Sam was, I would say, Sam’s super nice! I later heard that on the same night, just a few hours later at a different venue across the street, Sam was downright nasty. He would not sign for anyone. I chalked it up to, maybe they were all dealers and that’s why he gave them the brush off. However, he made Mike’s top ten worst signers. I hate to argue with my Mike, but, the verdict on this day: 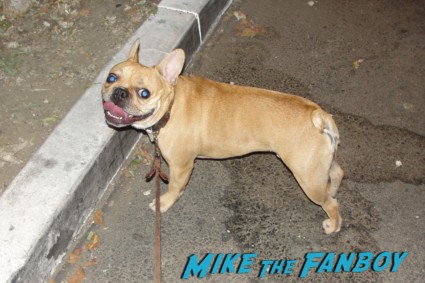 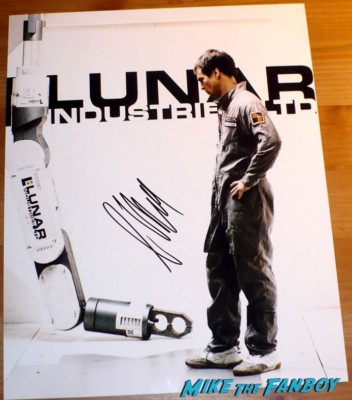