I’ve been collecting autographs for 20 years (mostly through the mail) and enjoy the thrill of getting a signature from my favorite celebs just as much today as I did when I started. Living in Portland, Oregon- the in person encounters are somewhat limited. A full cast from a hit TV show coming through town? Forget it.

My wife and I love “Schitts Creek”. Mildly obsessed with is more like it. It has an amazing cast featuring one of my favorites, Catherine O’hara. Side note: I have been (unsuccessfully) trying for her autograph (ttm) for close to 20 years and also have heard stories that she can be “schitty” about autograph signing. We bought tickets to the “Schitts Creek Up Close and Personal Tour” which was coming through Portland. My wife couldn’t wait to see the show. I, on the other hand, could not wait to MAYBE get the cast (or at least O’Hara) to sign.

After months of waiting, the big day arrived. I had my 8×10 cast photo printed and needed to find the right pen to compliment the photo. Blue sharpie was my #1 pick but I was afraid they would think I was a dealer (which later you’ll find out that one cast member did). Black Sharpie? Nah- too dark. Silver sharpie? I like it but it writes too thin. I finally settled on my new silver acrylic paint pen. The show itself was great…funny, heartwarming, and good audience interaction. Now for the best part…

We got to the stage door and were the first ones there (YES!). I had my spot secured right next to the stage door. The show let out and I swear 200 people or more crowded around the stage door- it was CRAZY. Side note: We love “Schitts Creek”. These people LOOOOVVVVEEE it and took it to a whole new level.. Unlike any fandom I have ever seen. After 20 minutes or so the crowd (thankfully) started to dwindle. I met some cool fans including a dude who once (almost) ran Catherine O’Hara over in LA… twice! He was honored that she had given him the bird.

Suddenly we see people coming… it’s just the tour manager. 30 more minutes go by and we see more people coming…From behind a corner I see a suit and grey hair approaching.. Eugene Levy walks out and people go NUTS.. He looks surprised (but I think it’s just the position of his eyebrows). I ask for his autograph and he signs (SCORE!) and quickly gets in the waiting van. Annie Murphy comes out next and could not have been nicer! She happily signs for me and gets in the van. 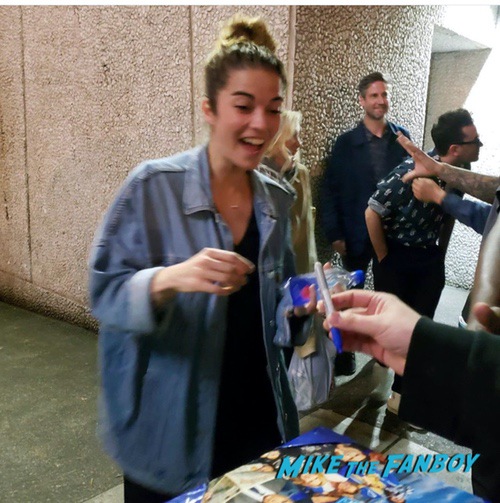 Dan Levy is next and he is also very nice but in a hurry. He looks at my photo, looks back at me, looks at the photo again (as if to examine it) and with a wry smile asks “So who should I make it out to?” I happily tell him “Jeremy.. J-E-R-E-M-Y”.. I am certain he thought I was a dealer up until that point. He quickly gets in the van. And then I see her. She’s right behind Dan. Holy mother of Beetlejuice it’s Catherine O’Hara! I ask politely for her autograph. She looks right at me, smiles and says “Sure”. I proceed to tell her I am a huge fan and love her work. 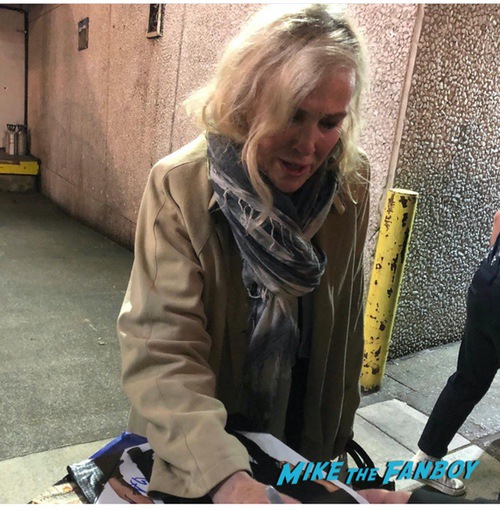 She stops, looks up at me and says “WOW- Thank you so much!”. She signs for one more person and then into the van. And just like that- they are off.

2 great things happened tonight. 1) I finally got a Catherine O’Hara autograph, and 2) I have a cast signed photo that I got in person. As I drove home, I started to reflect back on some of the crazy adventures I have had collecting autographs in Portland. And there are some CRAZY stories. Maybe one day I can share them. For tonight, I’m proud to say, as I look at my cast signed photo that this Portland autograph fanboy is the ‘Schitt’. 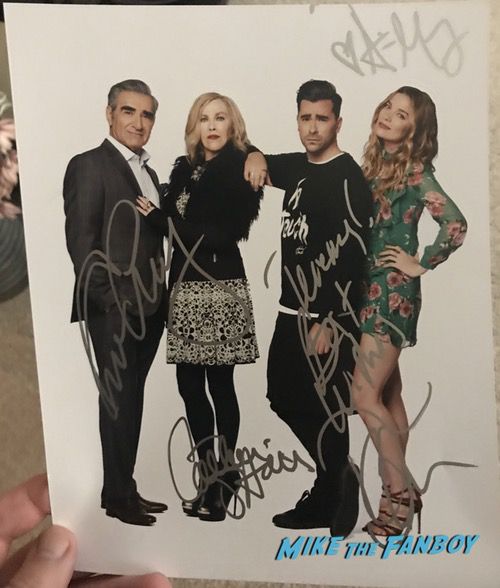