Cult classic cinema can’t be discussed without acknowledging and appreciating John Waters. For over 50 years the iconic pencil mustached man has been entertaining, exciting and eliciting responses from fans and families all across the globe. John Waters is a National Treasure.

In this day and age of celebrities either embracing or sheltering themselves from fans, John Waters continues to go above and beyond. Waters willingly and graciously greets each and every fan imaginable no matter how bizarre, brave or bold. John Waters equally embraces his fans with love and affection to remain one of the coolest celebrities around.

On the way to the event, my friend David and I joked about certain celebrities with their paid meet & greets nowadays. Some will make you spend thousands of dollars, which are essentially glorified group pictures and/or the most awkward 10 seconds of your life. Certain celebs love their fans and make the world know that. Despite his notable nicknames such as the Pope of Trash and Prince of Puke, John Waters attracts audiences regularly with worldwide appearances including his Burger Boogaloo (celebrating its 10th anniversary), Camp Waters and his one man shows.

Recently John Waters made an appearance on “Real Time with Bill Maher” and responded to a comment about being famous. He says it’s always entertaining when someone comes up to him in a restaurant and they say, “I’m sorry to bother you” and of course he quickly quips, “Well you’ve already have,” but with a genuine grin. Of course his humor permeates with every clever comment, but also emphasizes “It’s because of you I’m even able to have this meal. So thank you!”

Luckily, Waters said these comments literally the day before his sold out LA book signing. Considering Waters will usually sign whatever at events and take pictures we each debated what to bring. Prior to the event, David received an email stating John Waters would sign (1) additional item and take pictures (time permitting).

Considering David and I had met him several times already, including on his last book tour and with one of his Christmas shows, we weren’t too worried. Besides, we knew it was going to be a fun evening even if all he did was just the Q&A and signed only our books.  We arrived nearly 90 minutes before when we noticed there was a significant line and decided to join. After doing a quick meter check, we popped in the line and patiently waited. One of the coolest things was when we arrived in line we were given a group ticket showing our place in line. We were given a “Tracy Turnblad” from “Hairspray” group ticket when we arrived and learned there were groups of 25 with each character. 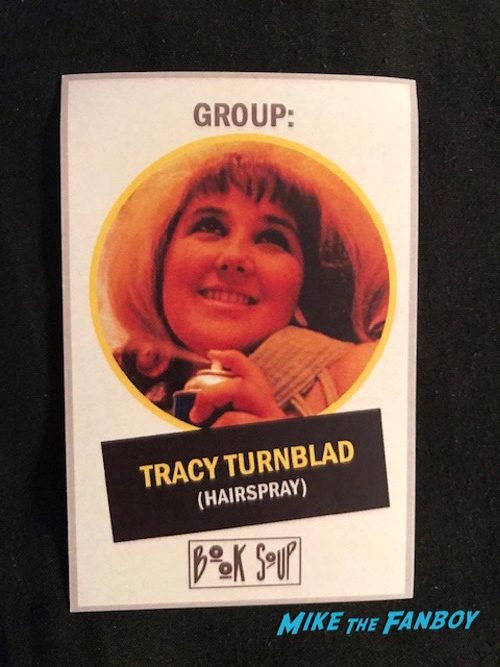 We somehow managed to find the last two front row seats despite nearly 50 people were ahead of us. We quickly made friends with our neighbors and joked about how interesting book signings can be. I tried to calm them down as neither had met John Waters before and stated he is always accommodating and amazing with everyone. While David was at the restroom, he overheard someone state that John would sign whatever was brought and we passed along that information to our neighbors.

As time approached, John Waters and moderator Merrill Markoe came on stage. They were going to conduct a Q&A session before having the audience ask questions. For anyone that has attended any sort of Q&A or seen his one-man shows, they are exceptionally entertaining with witty remarks and clever comments done rapid-fire. 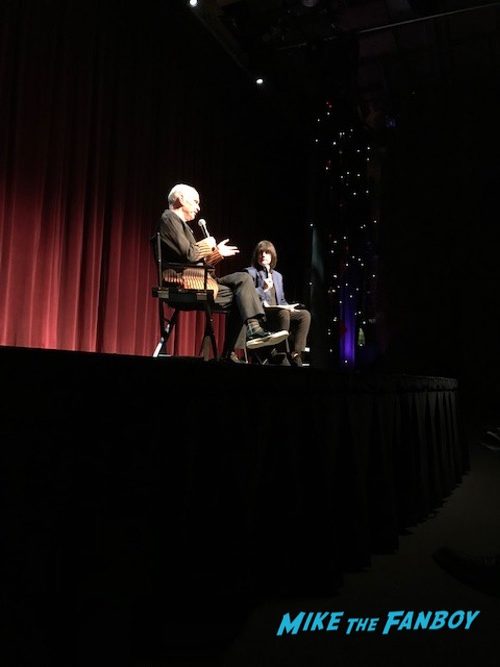 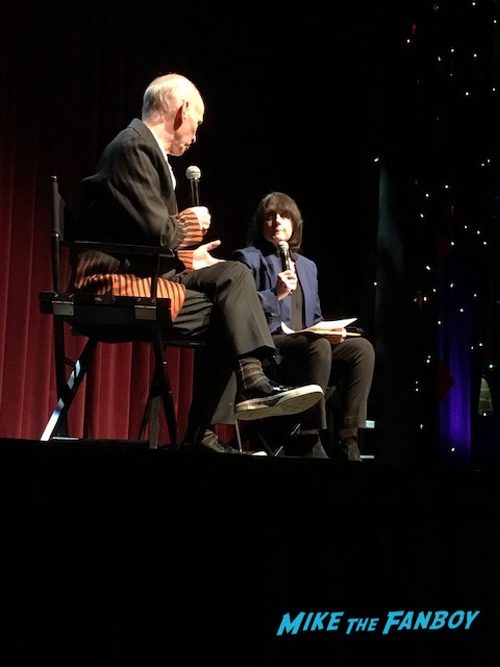 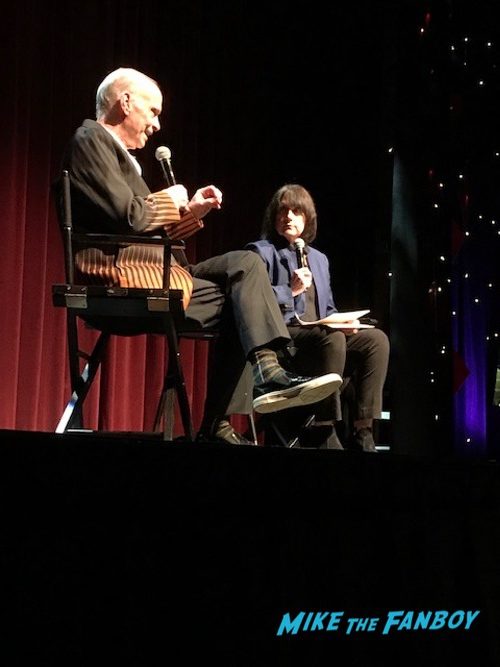 To be honest I don’t know how long the Q&A session lasted as everyone was constantly laughing throughout.  They announced John would be taking a mini break to reset in between the signing and Q&A portion to collect his thoughts. At this time John Waters even joked, “I’m a whore. I will sign whatever you have!” 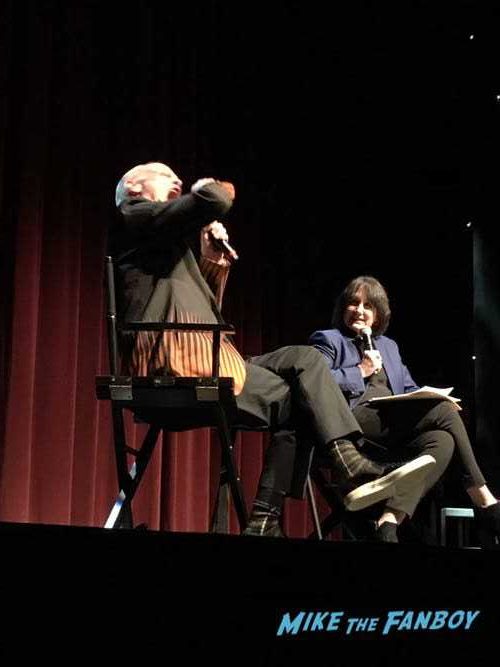 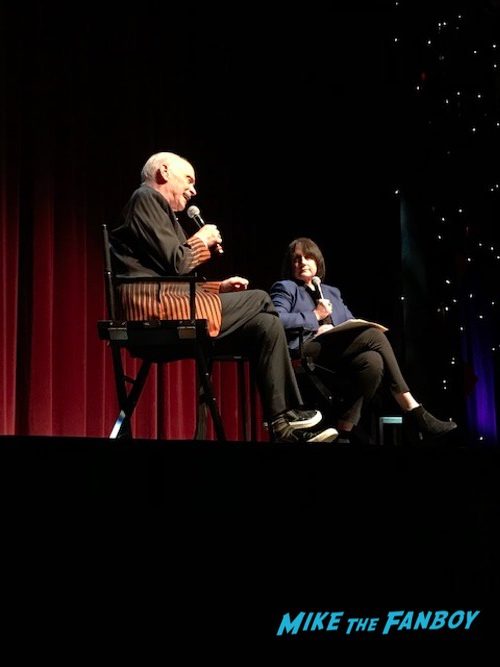 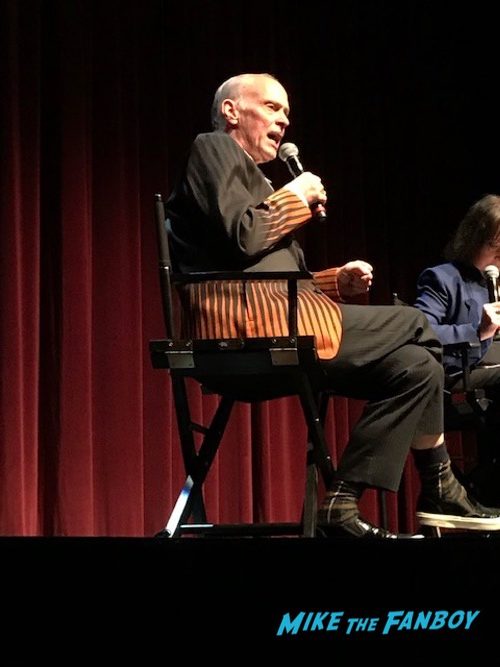 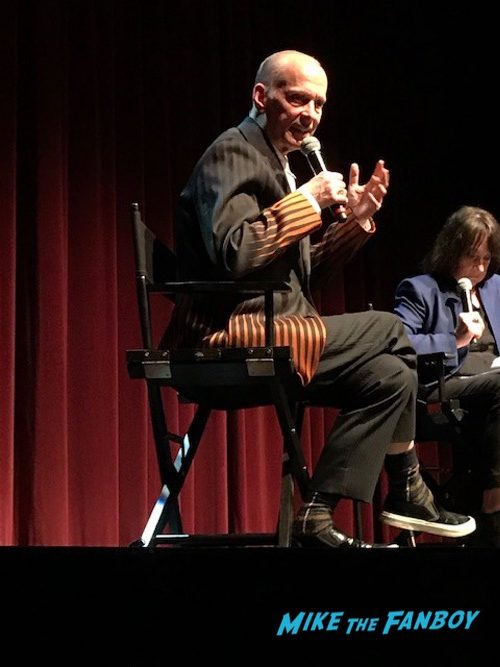 Initially we thought we were in the first group, but turns out we were in the second group. Nonetheless we eagerly waited. Since we are in the front row we overheard John Waters coordinate with how to setup for autographs, pictures and streamline the process for everyone. He even asked for several sharpies and pens mentioning he had some on him, just in case. The fact John would carefully coordinate how he was interacting/signing speaks volumes of how much he cares about his fans. 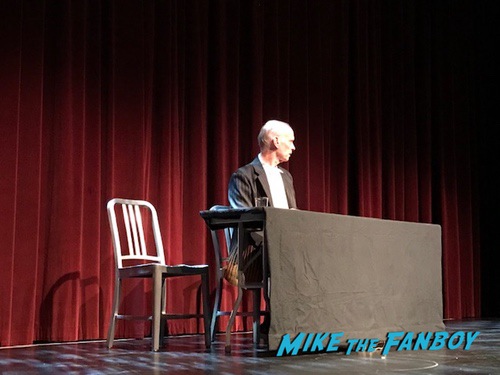 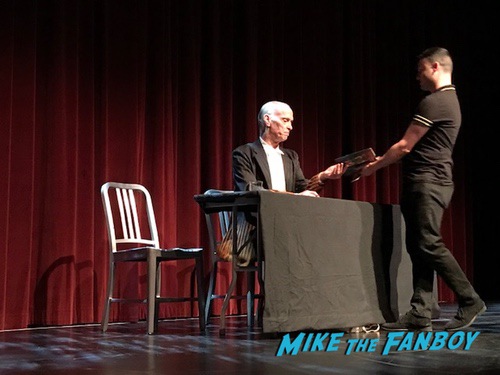 Our time comes and we get called into line when Tracy is called. It’s essentially a free-for-all getting in line when it’s not numbered but everyone is enjoying each other‘s company talking about John, which I love. I always enjoy entertaining others and talking about your fandom with fellow fans. It’s always awesome connecting with people like that and creating fun memories. 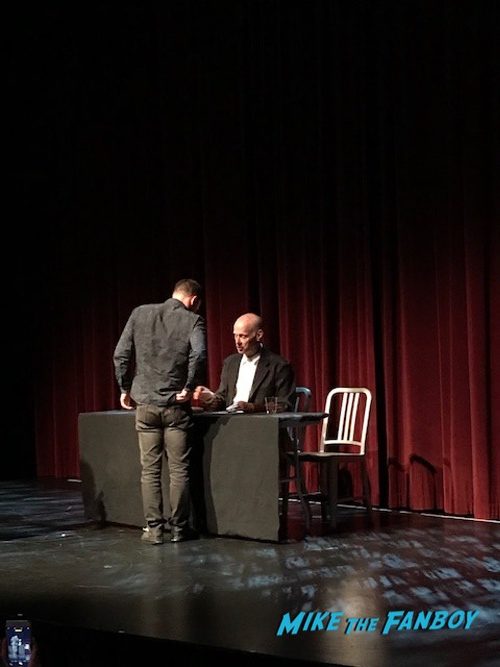 Now one of the things I detest about book signings is sometimes they ask for the most covered page/actual title page to be signed instead of the blank title page, which could be a tad frustrating especially when certain people have large signatures. Now John Waters doesn’t have the nicest autograph, but he can certainly add comments on things if asked or if you mention something cool. For example I had him sign a “Serial Mom” laserdisc for my mom and without hesitation/asking he added “Happy Mother’s Day” after personalizing it. Considering my birthday was approaching I made sure to inform him and he graciously inscribed my book with a birthday wish.

As always, John was really accommodating and gladly signed my book with a “Happy Birthday”. He would sign whatever books you had first before switching to any memorabilia with sharpies. Waters asked if I wanted the items inscribed and I said yes please, but apparently I was blocking his light and he asked me to move over politely. Unfortunately on two of my items he literally started an inscription with his rushed “To,” but signed it without actually inscribing, which was really funny. However on my poster he made sure to actually do a careful and neat “To John, John Waters,” which was one of the nicest autographs I have ever gotten from him. Both my friend and I were able to walk away with some cool items.  Thanks again for a very fun night! 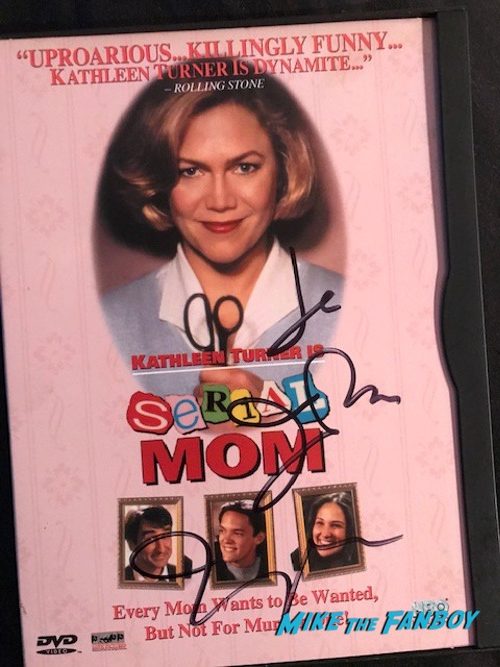 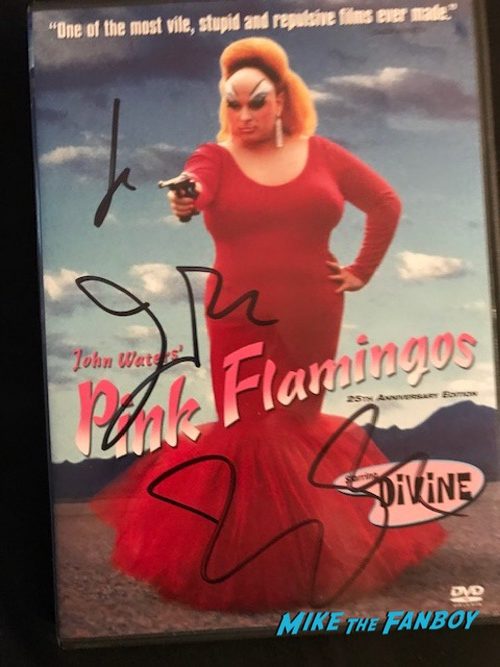 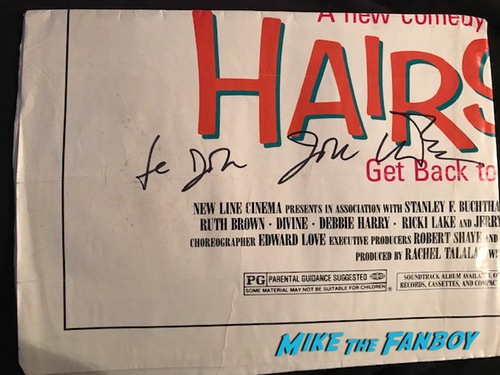 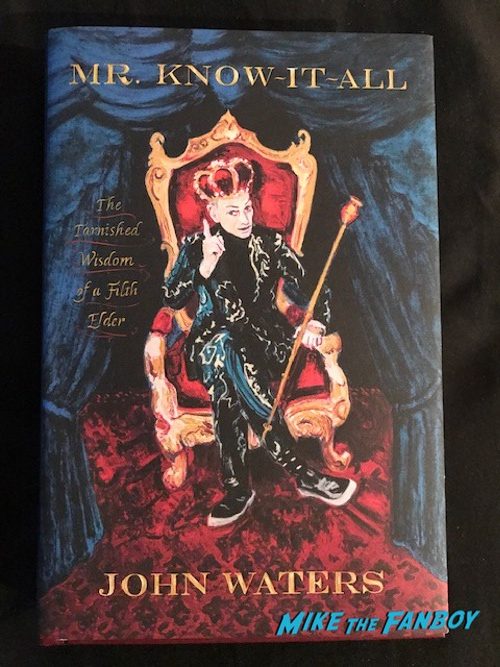 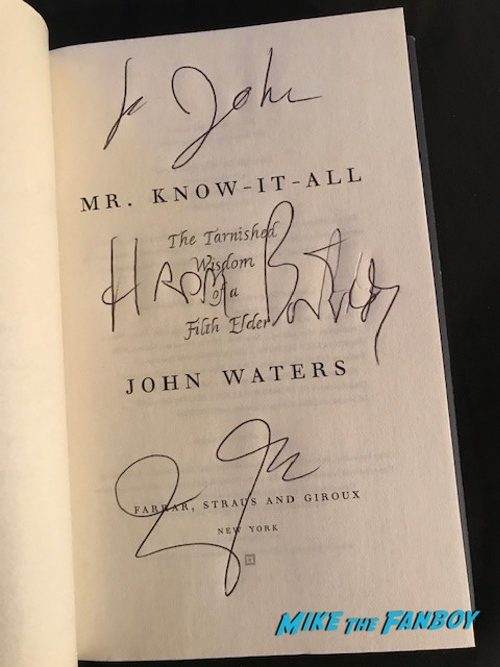