Home / Interviews / Talking With Justified’s Graham Yost! Ending The Series! What’s Going To Happen Next! And Will Their Be A Big Screen Leap?

Justified is one of the most prestigious and noteworthy shows on the air. Currently about to have their season finale on FX, it has made practically every critics top pick of the year. With a career defining performance by star Timothy Olyphant, Justified has been not only a critical hit, but also one with viewers as well.

Recently, we had a chance to talk with creator and writer Graham Yost about the series as it wraps it’s current season and then heads into its final season.

When talking about Raylan and the changes he has gone through this season Graham said that “it’s also Raylan’s struggle because he wants to get Darryl, but he can’t just kill him because then that would doom Kendall to a long stretch in prison,” Graham continues, “But it’s also, I think, it’s something that happened in the 11th episode, when after Art was shot and Raylan is talking to Tim Gutterson and Tim is basically saying do you want to go out and just find Daryl and kill him? And Raylan says, “I don’t think that’s what Art would want.

And so Raylan has the struggle in him of the guy who wants to get revenge and yet can’t because of the kid, but he also wants to try and do things in a way that Art would respect. We’ve always seen Art as his good father and he’s, obviously, incredibly disappointed Art this season in a way that he never has before, so that’s the struggle.’”

This season a lot of the characters dealt with being sort of everyman for himself and on their own more so than in seasons past. “the whole sort of point of this season was to strip away everyone from everyone so that Ava is alone in prison, Boyd is alone on the outside and Raylan is alone.”

A question I think everyone has on their minds, is why end Justified after six seasons, “I think we’re all just incredibly happy to be even thought of in the company of other great shows that are on right now. And I think that’s one of the reasons why we want to end it after six seasons is we want to make sure we don’t overstay our welcome.

We don’t want to run out of story. We don’t want to be treading water. We’ve already done a few things that to our mind are dangerously close to repeating ourselves. And sometimes we’ve repeated ourselves without knowing it. It’s like, wow, in retrospect that seems an awful lot like the one in season two or three or whatever.

So, that’s the big thing is we want to leave the party on a high note.”

And what does that mean for the final season?

“I think that the pressure has been mounting each year that we’ve done Justified. But we honestly try not to think about that too much. We really just are going to be thinking how can we end this series in the most exciting and heartbreaking and true to what we’ve done before way that we can?” 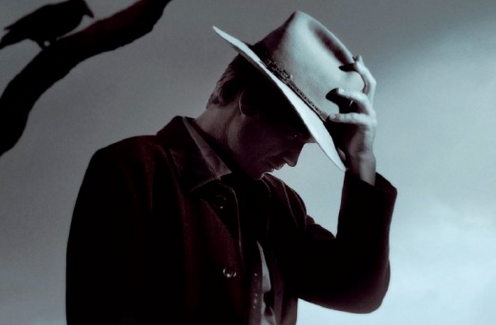 Elmore Leonard, who wrote the books that Justified is based off of, passed away last year. How does that affect the writer’s room and what’s being written?

“His name comes up every day in the writer’s room and on set. You know, Tim, Walton, the other cast members talk about him and his work all the time. We really do take seriously the notion of what would Elmore do? And we think about it a lot and we refer to his texts almost as if they were scripture, you know. It’s, well, in Tishomingo Blues he did this, and in Gold Coast he did that and, oh boy, City Primeval.

City Primeval was one of his earlier crime fiction books and we look to that for inspiration a lot this season. Our bad guy had that ability, a Daryl Crowe, Jr., like the bad guy in City Primeval to sort of always get out of the good guy’s traps.”

Another question a lot of fans have, is will we see Art and will he be back next season?

“We’ll see Art. I’ve tried right from the beginning, since Art was shot in the 11th episode of the season, I’ve tried to not be coy at all. We’re not playing that for suspense. Art lives and he will be a part of things. I will say this, that one of the themes of the final season, as it were, theme might be not exactly the right term for this, but is the notion of one more thing before I go.”

And once the series ends, is it possible that we will see Justified on the big screen?

“Again, I won’t be coy. We’ve talked about it, but there’s absolutely nothing concrete. Our focus is just so entirely on trying to put together the final season that we haven’t really thought beyond that. At the same time, we always think about it.

Now, that would lead you to believe that then Raylan must live, but that is something that, again, because we haven’t decided, you know, listen, if he dies then there’s not going to be a movie. Unless it’s about Dewey. And we love our Dewey, but it really hasn’t been decided. But it also is something that we do talk about.”

Justified has it’s series finale Tuesday at 10:00 on FX! Make sure and tune in!