Who doesn’t love Veronica Mars? I know I do! Clearly! LOL.

Just as the show ended Kristen Bell was making the leap to feature films, but she still took time to hang with the fans and be adorable!

I remember even asking her about the Veronica Mars movie when I met her and well… You can read about it below!

My how a few years changes things! We now have the movie we were hoping for! Woo to the Hoo!

“A long time ago, we used to be friends,”

well maybe only two times ago… Is that grammatically correct? Anyway, for those of you unfamiliar with the above quote (and if that’s you, get yourself a subscription to Netflix and start watching Veronica Mars pronto!) it’s the opening line to the theme song of Veronica Mars starring the incomparable Ms. Kristen Bell. I have been a huge fan of Veronica Mars since I was given the first season on DVD a long time ago. So many people dismissed it as a teeny bopper show but it remains a well written slice of crime noir and with hints of a big screen adaptation in the works, I’m heading out to my favorite L.A. alleyway to hunt down Ms. Bell and see if she has any further info, and maybe get an autograph or two.

4:10 p.m. – I’m just about to park and I realize I only have two pens with me. I’m usually so much better prepared, but lately I’ve been so disorganized which drives me crazy and makes me more disorganized, which leads to me being in a vicious cycle of disorganization. Sigh…

4:22 p.m. – Today I’m trying to get Ms. Kristen Bell on a couple things. I have loved her since Veronica Mars premiered some years ago and have been blessed to have the opportunity to meet her a couple times already. However, I still need her on my Veronica Mars script (yep, it was actually used during the production of the show) and my Forgetting Sarah Marshall poster.

4:25 p.m. – I started the Sarah Marshall poster before I saw the movie (now that’s a long story. Lol) and I have Jason Segal and Russell Brand on it already, so I just need Kristen and Mila Kunis and I’m done! Whoo Hoo! It’s a kick ass movie; pick that one up after you are done with Veronica season 2.

4:35 p.m. – I’m a little shocked there are not more people here. There are only three other people here waiting. There is a premiere in Westwood today so that might be where everyone else is. This is cool because if there are only a few people we have a better shot.

4:44 p.m. – The other people here are really nice. Daria, is a big Joss Whedon fan and a fellow Buffy lover, I always try not to dork out too much but when talk turns to Buffy it eventually turns to Buffy action figures and my dork flag flies. Oh well, why fight it! I’m 6’3; I have 16 inch biceps and have a case of Buffy the Vampire Slayer action figure prototypes in a curio case in my hallway! I’m coming out baby, I’m a Buffy, Veronica Mars Facts of Life loving dork. Whew… I need a minute now. I hope my parents don’t disown me now. 😉

5:10 p.m. – Well, talk is now turning to comic con, and my flag is really flying now. It is waving heartily in the breeze.

5:15 p.m. – They are taping the show early today, so if everything works out okay we can get Kristen and I can still be home in time for dinner today. MMMMMMM dinner….Why do I love food so much? Why… Sigh… 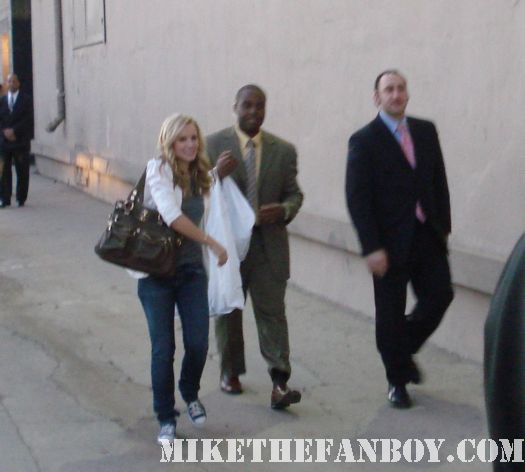 5:22 p.m. – She’s walking towards the door, and everyone starts calling her out. She says something to the guy next to her, and then starts to come over. She looks hot! Like H-O-T… HOT!

5:24 p.m. – Kristen (at least in my experiences) has always been very approachable and is super friendly and talkative. She is signing Daria’s DVD cover and a photo for her friend. She comes over to me, and I ask her if she will sign a couple for me. I ask her to personalize them to me. She signed my script and then sees the Sarah Marshall poster. She says, ‘No you suck!” playfully when she sees it. I said, “oh my God, would you write that on the poster!” She was like, “Okay” so she signed my poster, “For Mike, You suck too” I love it! 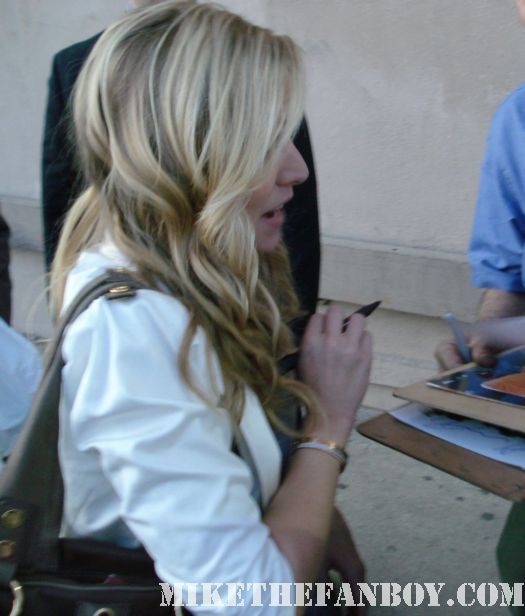 5:26 p.m. – She is signing a few other things for people and I then get a pic with her. The flash didn’t go off, but that’s okay since I already have a couple with her from before.

5:29 p.m. – I decide to ask Kristen if she has any news about the Veronica Mars movie, and this is a paraphrased quote, “Rob (Thomas, the creator of VM) has to write the thing, I think he started talking about it to get some press, but he just needs to write it. Tell him to get his shit together and get it going!” To which everyone was like, yeah! 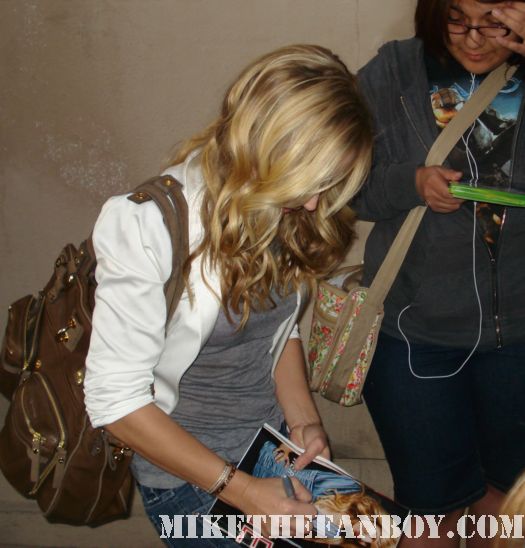 5:33 p.m. – Kristen signed a video game cover and someone asked her if she was coming back to Heroes, and she hesitated but said you never know. I think I got that on one of the videos so check them out. Kristen is super good to all of her fans, and today was no exception, oh and Check out Kristen’s new (well kind of new) movie Fanboys coming out soon! 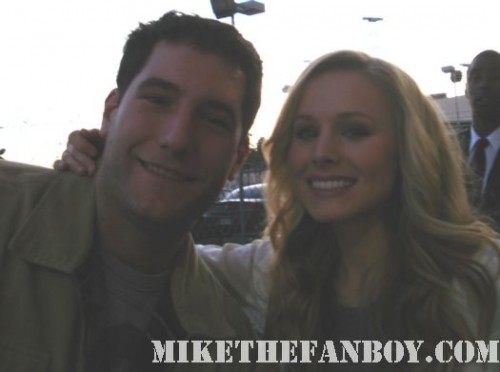