It’s Labor Day and we here at Mike The Fanboy are still slaving away to give you the best in Manic Monday goodness!

You know, it’s not everyday in the hallowed halls of Mike the Fanboy-dom that we get to talk about our namesakes… Pinky aka Pretty in Pinky today gets to talk about one of the stars in her namesake film, Mr. Jon Cryer. Now, I love Jon… I loved him in Pretty In Pink, Hiding Out, etc… I’m not a huge fan of 2 and a Half Men but you can’t win them all right?

Pinky has met Jon numerous times over the years and once with her pooch Mr. Sammy Rhodes!

Check out her encounters after the jump!

Hello, my lovelies. Pinky Lovejoy here shocked, frankly, that we’ve never really talked about Jon Cryer before. Sure, we’ve covered him in passing, but from what I could gather, there hasn’t been an actual article solely dedicated to the one and only Duckie Dale himself, Jon Cryer, before today. How can that be? 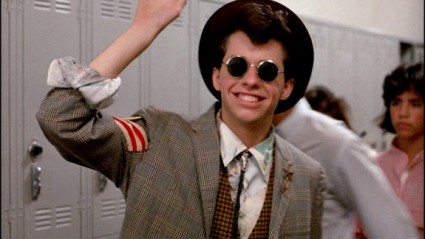 You see, Jon Cryer is a class act. Jon Cryer is one of those amazing celebrities who recognizes what made him famous and doesn’t try to skirt away from Pretty in Pink memorabilia or signing things as Duckie Dale. Despite his later success with Two and a Half Men, Jon still manages to have a sense of humor about being Duckie Dale which endears him to me to no end. As we all know, Pretty in Pink is one of my all-time favorite movies and those characters are near and dear to my heart. 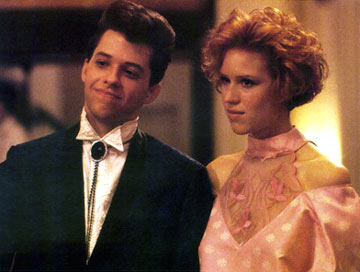 The first time I met Jon Cryer was at the Emmy awards in 2010. Despite the star power all around me, one of my goals of the night was to hopefully meet Jon Cryer for the first time and get a picture. I’m happy to say I was successful! 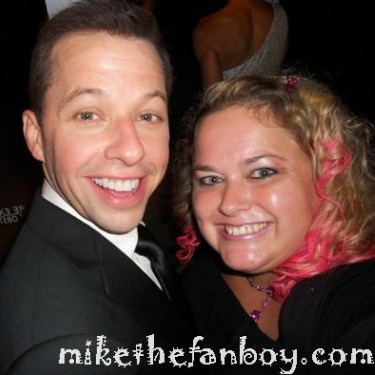 Despite his “being in a hurry” (why do they always say that?), he stopped and posed with me and made my entire night. Sure enough, the next year, I was able to meet him at the Emmy awards again, only this time he wasn’t quite as rushed. Perhaps the Emmy awards are our new thing? 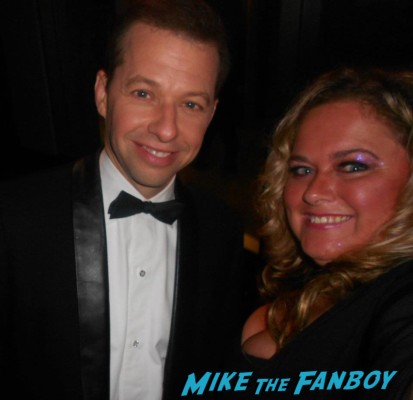 Earlier this year at a different event, I saw Jon Cryer again and he was super cool to the handful of fans waiting outside. In fact, I was totally regretting not having my favorite piece of wall art, my original Pretty in Pink soundtrack album cover which has graced the walls of every place I’ve ever lived since the movie came out. In other words, it is beat to crap. 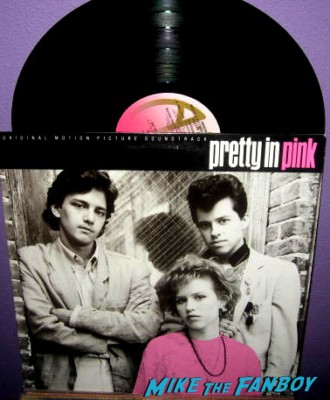 Although it’s now in an actual album cover frame, before I framed it, it’d withstood being push pinned, taped, and stuck up with sticky tacky, so it looks like a hot mess. In fact, Mikey is horrified by it and thinks I should throw it out immediately and never get it signed.

(Editor’s Note: I’m not horrified by it, nor do I think you should throw it away. What I think is perhaps if you are going to get the cast to sign a piece like this, perhaps you should invest the $14.99 and get a mint copy that’s not beat to shit. 😉 M-)

But I love it. I love the history and how I’ve had it so long and in every place I’ve lived. It has sentimental value, so once I get it signed, it’s going to be even better. So far, though, I always forget to bring it out (see, I’m terrible at autographs, it’s true. I have no idea what to do. I’m a mess).

(Editor’s Note: No really! At autographs, Pinky is a hot mess! But I’m a hot mess at photos so there’s balance in the Fanboy universe! M-)

So, it hangs on my wall unsigned. Fail. 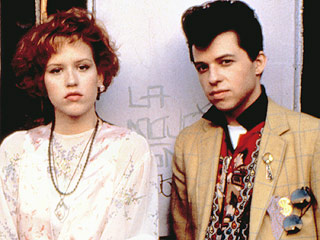 The best part about seeing Jon that day was having Sammy with me. I love the picture where Sammy is kissing Jon – it’s the cutest thing ever! 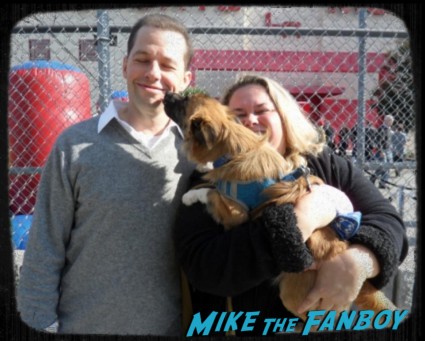 Jon was a great sport about the whole thing – much like he is in most cases. I really admire Jon and appreciate the fact that I’ve seen him on numerous occasions and every time he’s very gracious and kind to fans. Truly a class act.

For additional pink fodder, please visit www.pinkylovejoy.com or follow me on Twitter: @pinkylovejoy. As always, have a pink day! 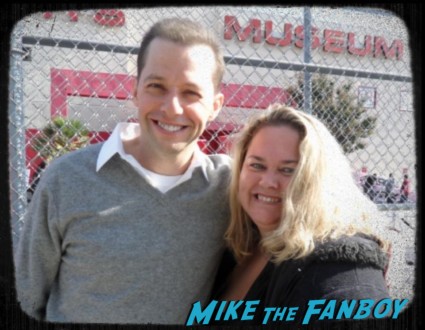