But we’ll get there. For this weeks Fanboy Fail Friday, we’re talking some Dallas Buyers Club. Now, here’s the thing. Matthew McConaughey has usually been pretty cool. I mean, I’ve never seen him be a jerk or anything like that. He’s not super fan friendly, but he’s not bad and usually signs really fast but does his duty.

So, when I saw he was on a talk show, I was like… I’ll head down with my Magic Mike and Dallas Buyers Club poster and see what happens.

There were a lot of people and nothing was organized. Let’s be honest, organization is key, if it’s not safe no one will do it. And honestly, I don’t blame them. There are crazy people out there and only half of them write for the site… Kidding… Kidding… Cough Billy Beer.

Seriously though, it’s the truth.

Upon his arrival we barely got a wave and that’s not a good sign at all. 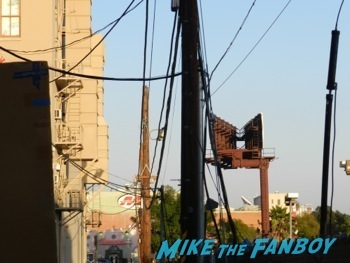 Nothing looked good at this point. 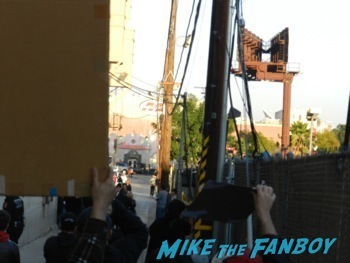 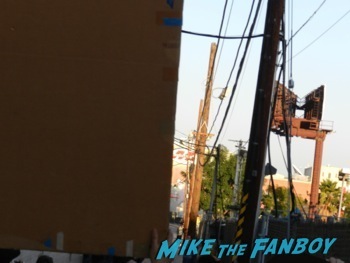 And then in preparation for the big star of the day and the second guest, June Squibb… Yep June Squibb, security moved everyone, lined us up single file and made everyone get behind the barricade.

Because you know, for Matthew McConaughey don’t organize, but for June Squibb get your shit together! She was in About Schmidt for God sakes people. (I love her, don’t get me wrong, she rocked Nebraska and yes I had a promo Nebraska hat for her to sign)

So, we wait, even though the odds are not good at this point.

There is Candy Crush being played, Fruit Ninja, etc… I talked to Jenna and Megan and Garrick and The Other Mike and Chris and myself, because once the boredom sets in you just don’t know what or how to occupy your time.

And the cold… oh yes… the cold… the wind whipping around. Yep, good times.

Time is going by faster and faster, okay that’s a lie. Only five minutes actually passed but who’s counting. It’s like counting the drips trickling down from a faucet when you have to pee. Ugh…

June Squibb? Never saw her go in. I think she was levitated. Beamed in? The secret June Squibb entrance? It’s all a possibility at this point. In fact, there should be a whole post about how June Squibb made it into that theater undetected.

I’m going with Ninja, but that’s only because she seems stealthy.

At this point there are about 65 people. Not horrible, but a lot of people. Everyone is wrangled into the pen though and it’s literally single file, even the paps are behind the barricade, it’s the “protect June Squibb at all costs” initiative.

And then she arrives out of protective custody! It’s June Squibb! Some people yell and June makes it to the door and takes off like a banshee in heat. Doh!

Then out comes Matthew McConaughey, we yell, we chant, we fall to our knees and beat our hearts “Matthew!!” the cries can be heard in the distance. And nothing. A small wave as he hits the door and he’s out.

So people try to run, some are crying in heaps on the floor, I cut my losses and want to get Chick-fil-a.

And here’s the thing, he may of had somewhere he had to be, it’s fine, I get it. Generally Matthew McConaughey, has been pretty cool.

This is where it kills me.

Matthew McConaughey is now in the fenced in pen getting in his car. I’m walking with The Other Mike down the ally, and when I say walking… We’re walking.

We get a badge pulled out on us and the LAPD police officer says, “Stop! You have to wait here! Matthew McConaughey does not want to sign autographs!” 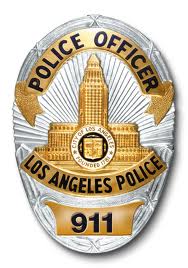 We all kind of looked at her in wonderment. We were trying to go home, the dude is in the car, I’m not going to throw myself in front of the car for the love of Magic Mike! LOL. 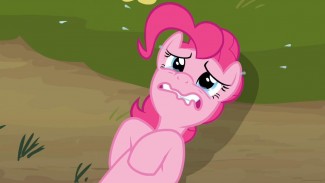 I don’t think I’ve ever gotten a badge pulled out for just walking.