Billy Beer was out and about for Star Trek Into Darkness stunner Ms. Alice Eve. Who, BTW is hyper nice! I love her. I thought she was really good in Star Trek as well. She played Carol Marcus who as we all know later on is the mother of Kirk’s son, David. Who ends up dying in Star Trek 3: The Search For Spock at the hands of Commander Kruge… And…. I just geeked out hard!

Anyway, also making an appearance is sexy beast of a singer Adam Levine, who never met a shirt he didn’t wear. LOL…

Check out Billy Beer’s full encounter after the jump!

Welcome back to Billy Beer’s Barstool. Now as Mike has mentioned a few
too many times, I have a little bit of a singing background.

So when I heard Adam Levine from the Voice was going to be out, Maybe I wanted
to make sure he was going to be able to hear and see me. Maybe he’ll
pick me to be on his team next season. Maybe Karalee will get a
picture with this sexy beast! Maybe he’ll come over and sign about 100
pictures people have of a model grabbing his crotch from behind while
he’s naked. OR, maybe I don’t really care cause I’m really there for
the lovely Alice Eve!

Karalee and Scotty get there a little bit before me today and were
nice enough to hold a spot down for me. I think we’re all in it for
the long haul today, cause it’s starting to get close to taping time
and neither guest has arrived yet. Finally the door opens and it’s
Adam. At this moment I am unable to hear due to the high pitch noises
coming out of all the female voices around me. Adam looks over and
waves. 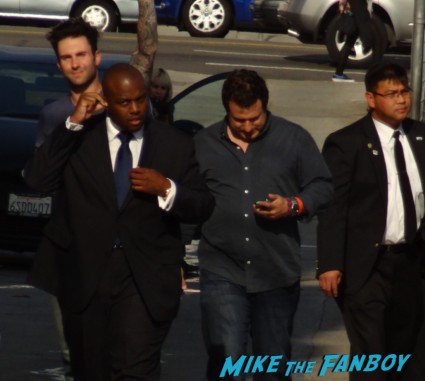 I really wasn’t expecting him to do it, but it would have filtered
out half of the crowd if he did. After the disappointment of Adam
walking in, we all put our stuff down. When we look back up, there’s a
blonde walking in too. CRAP! I think we just missed Alice on her way
in too, and nobody said a thing. Someone finally yells to the guard,
and affirms it was her. Grrrrrr! Time for the waiting game.

Montage! (Karalee bought some pretzels which I split with her, ruining
my diet! But they were soooo good)

Wow, they are sure taking their time to come out. During the montage,
even more people started showing up. I can’t believe how many people
there are. We discuss the fact that there have been Oscar award
winners here with a tenth of the crowd that is here right now. This is
just stupid! I guess girls love their male singers that sound like
girls.

Finally Adam makes his way out. ADAM! ADAM! ADAM! Adam! Adam Adam adam
adam a-dumb! BOOOOOOO! All we get is the lamest waves you have ever
seen. Yes, that is what all these people have been waiting hours for,
is for you to wave at them. They will cherish that moment forever. I’m
going to change my facebook status to “Adam Levine waved at me and 99
other people!”

Well at least now everyone will leave…..NOPE! Really! All you people
have stuff for Alice too? AGH! I can see the disappointment in
Karalee, but she sticks around to help me out. I’ve got a combo shot
with Chris Pine that I’m trying to get finish, a combo shot with ME
that I want to get done, and an 8 x 10 of her from Star Trek.

Here comes a blonde walking out. ALICE! ALICE! She stops and looks
like she’s asking people if she should do it. Finally, she heads on
over. YAY! She starts signing and taking pictures with people.

After about 10 people, her people start realizing this is going to
take forever if she keeps doing that. So 2 people before us they
announce no more pictures with, she will only be signing. I’ve learned
that means nothing. She signs my combo shot then sees my picture with
her. She’s like “Oh, that was the other day” 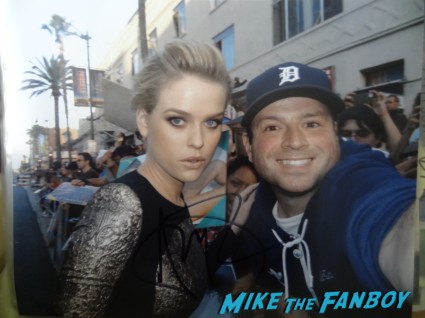 I then ask for a picture
and she poses really quick. Karalee was nice enough to take the pic
for me. 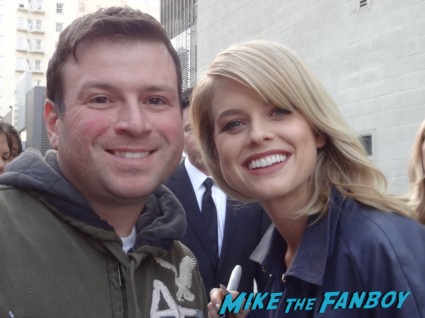 DONE! It’s funny to listen to her the rest of the way. She’s very
witty and very funny! On her way back, Scotty is asking her for a pic,
but she walks past. Luckily he’s able to run around and get her as
she’s driving out. 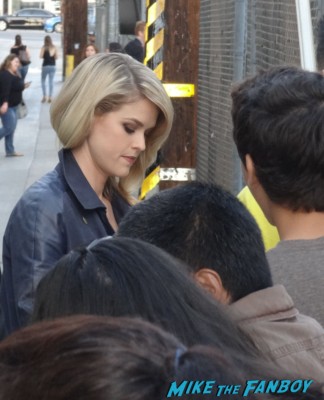 Well, I guess I’m not going to be on The Voice next season, but I did
get to see the lovely Ms. Eve again. And for that Success! Till next
time! 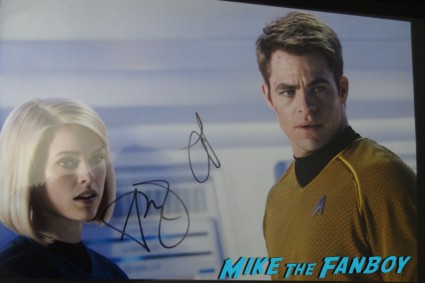