Home / Concert Reviews • Fanboying! • Karalee / Sam Smith Goodness! Karalee Not Only Won Tickets To His Sold Out Dallas Concert But Met Him Afterwards!

Oh my gosh! It must be Christmas because I awoke from my slumber to find an awesome recap from my long lost fangirl friend Karalee! As you know Karalee left us here at MTF a while back and now resides in the flat tundra known as Texas… Okay, it’s Dallas but still… I have to be somewhat dramatic!

Karalee headed out to the Sam Smith concert and not only won tickets, but was able to meet the crooner afterwards! I know!

Check out her fangirl recap below, and join me in saying, hello… come back… Come back to the light Karalee! We miss ya! 😉

Hola Fanboy friends! Greetings from Dallas, Texas. Since leaving L.A. earlier this year, I have enjoyed keeping up with all the graphing and selfie glory found on this site. But have also missed being part of the LaLa Land action. I have pseudo-retired my fangirl ways, but did manage to have a pretty great experience last week that I just had to share.

My high rests solely on one Sam Smith. He of the soulful falsetto, unassuming charm and just all-around adorable guy. His voice is effortlessly powerful and his pain, love and hope resonate with each note. The 22-year-old British soul singer has taken over radio this year, notably with his can’t-escape-it song, Stay with Me. His sold-out tour, in support of his debut album In the Lonely Hour, crisscrossed the country and his final stop was in Dallas last week. 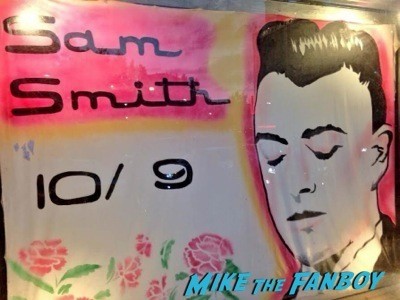 Tickets sold out immediately and then were being resold with the cheapest price — for standing room — going for $250. Each. That’s U.S. currency, people. I love Sam, but I’m not in a position to pay that kind of money for anyone. So I did something I’ve never in my life attempted to do: I tried to win a radio contest … AND I WON!!!! Yes, hello, I was the 10th caller! For my dialing efforts, I received two tickets to the sold-out show. I was ecstatic. I never win anything! I’m not even the person who has the red sticker under their chair who gets the table centerpiece at an event.

The show was incredible. His voice just guts me in the best way. I couldn’t believe I was there — FOR FREE! — basking in his rapturous glory. 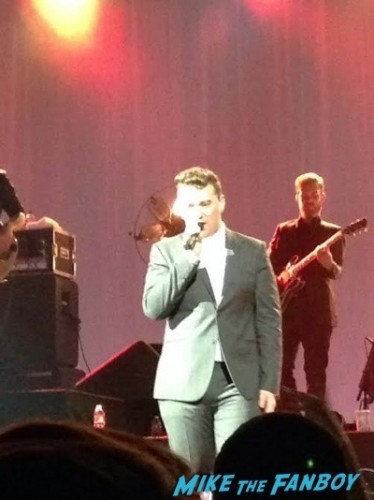 The song I most wanted to hear him perform was his aching version of Whitney Houston’s How Will I Know. If you haven’t heard it, look it up. It’s amazing. Whitney would be proud. 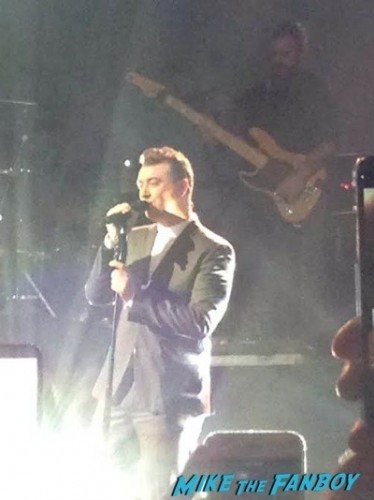 After the show, I saw some fans assembled near what could only be his tour bus. Of course, I had to join. I quickly assumed a spot right along the short barricade. (Needless to say, graphing in Dallas is a far cry from the Hollywood hoopla). My friend found me and there we waited. I had no doubt he was going to come out and meet his fans and sure enough, after about 45 minutes, there he was. He started at the other end of the barricade, signing anything and everything, taking photos, hugging fans, kissing cheeks. 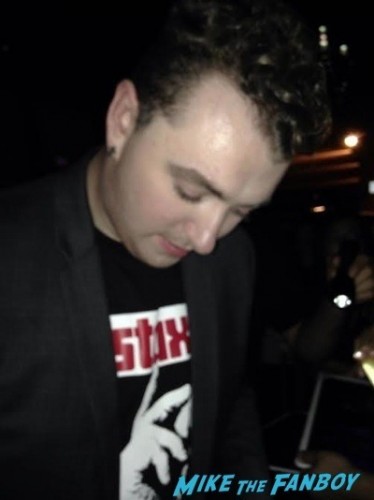 Once it was my turn, I told him how incredible the show was and that the concert was a definite highlight of my year. He thanked me and smiled and said something about me being “so sweet.” Ahh, a blurred, wonderful moment. I asked him if he would mind autographing my ticket stub and also taking a photo. He happily obliged, signing the stub first. 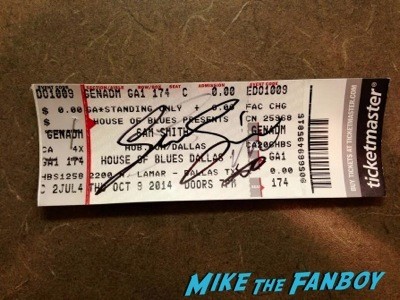 v
When it came time to take the photo, I panicked, worried about using the flash, my arm being long enough to take a successful selfie (I know, first-world fangirl problems). He said, “Here I can do it.” Took my iPhone (yes, Sam Smith held my phone), held it up, and click. He paused to wait for me to review it and make sure it came out OK. He saw it and said, “Oh, we’re cute.” I mean, DYING at that point!

It was an amazing concert made even more incredible by how kind and generous Sam was with his fans afterward. I loved him heading into the concert and that feeling has only soared since. I can’t wait to see where his career takes him next. He’s incredibly gifted and disarmingly humble — and I feel incredibly fortunate to have met one of my absolute favorite artists.

Thanks for letting me share … Catch ya on the flip side! 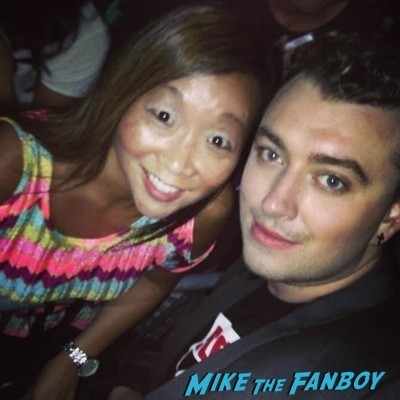