I should begin with the facts. A few months ago I started having a major fangirl crush on Misha Collins. It has since grown into a huge, unbreakable, unhealthy, and at times unbearable crush. It is what it is and goes with the fangirl territory, I suppose. Unless you’re a fan of Supernatural, or the amazingly bad Sci-Fi TV movie Stonehenge Apocalypse, you’re probably asking yourself, who is Misha Collins? Well, he’s been playing Castiel, the badass angel on the TV series Supernatural for the past 11 years. Mike made up several pet names for him – moo shoo gai pan, schmoopie doopie, moopie McRando (apparently Misha is too difficult a name for him to remember). 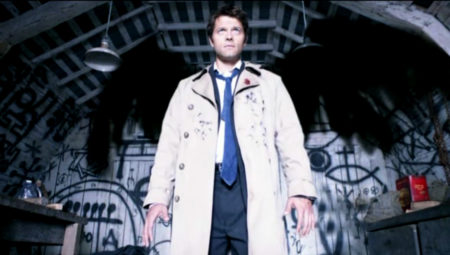 As bad luck would have it, I jumped on the Supernatural train pretty late, and missed many Paley Fest and Comic Con chances to meet him and the other cast members. As good luck, would have it, the 15th and final season of Supernatural starts this October so Misha and the rest of the cast were at this year’s SDCC for a final farewell panel in Hall H (write up coming soon). Due to the new lottery system, I sadly did not win a cast signing, so my only chance would be by a pure random run in with him. 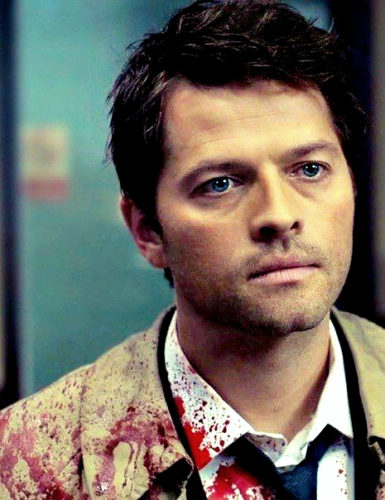 Que the heavenly miracle music. On the last night of the Con, around 8:30pm, while Mike and I were resting in a nearby hotel lobby (where admittedly a lot of lower tier actors, especially from the CW stay) that blind luck happened. I spotted a young woman with a large Supernatural photo book and a black Sharpie lingering by the elevators. I asked her where she had gotten that book and she told me about a booth on the floor that was selling them. I then asked if she know if the cast was staying here. Because of her kindness in wanting to help a fellow fan, she told me she was hoping to see Jensen (Ackles) and Jared (Padalecki) but she had met Misha just moments before Mike and I arrived. He had just checked in and was on his way to his room. She showed me her photo with him as well.

Eighty percent of the battle when trying to meet a celebrity is knowing where they are, so my odds are looking pretty good right about now. However, I had to walk half a mile back to my car in order to get some items for another friend of ours and of course they showed up, you guessed it, right then. There’s not much I can do about it, as I need this crap out of my car for check out in the morning so we all haul ass to the parking garage, get said crap out, and rush back. Mike knows I’m on mission and does not question me, keeping up the pace. He’s a good wingman. Once back at the hotel, I see that the girl who gave me the Intel was gone. Boo. Things are now looking glum at this point. I told Mike to settle in on the lobby couch and keep his eyes peeled on the elevator banks with me. Though to be honest, Mike could have had a full on conversation with Misha and not known it was him. I told Mike that if he saw me move, he had better move with me. After about 30 minutes, boom, I spotted Misha walking towards the elevators. He must have gone out while we had left for the car and was headed back to his room. Score!

I smacked Mike in the arm, yelled there he is, and jumped over the corner of the coffee table in one fell swoop. One girl made it to Misha before me and got a photo. I had carried ONE item with me for this entire Comic Con in hopes of getting it signed – a magazine with Misha on the cover. Sometimes it pays to be prepared. Once the woman had finished her photo op, I started to hand Misha the magazine and before I even asked him to sign it, he took the Sharpie out and began autographing it – the man knows how to take care of his fans. 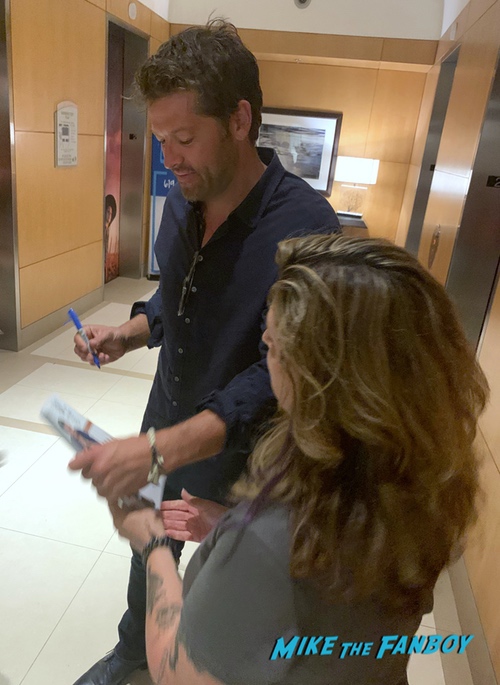 He looked extremely tired and didn’t say too much but he was smiling the whole time. I made trivial small talk and when he finished signing, he immediately put his arm around me and looked towards the camera. He knows the drill. Mike snapped a few nice pics, including one prior when we were chatting and he was signing. Did I mention he’s a good wingman? 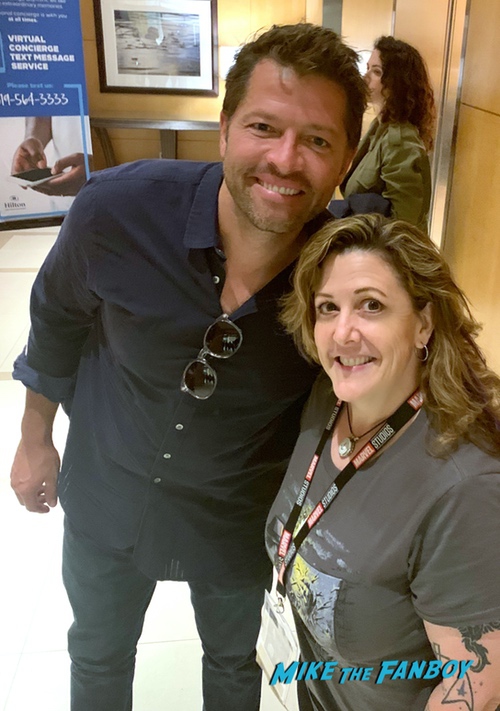 So, because of shear dumb luck, I was able to scratch that itch and move on with my life. Oh, if that were only true! Stay tuned for more Supernatural related articles. 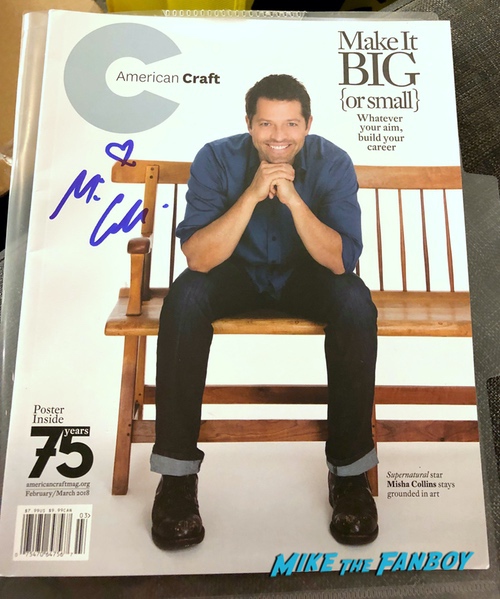