My heart, as well as everyone here at MTF is with those in Las Vegas. On behalf of everyone at MTF, we’re sending prayers and our best wishes to the families of everyone in the attack.

On a lighter note, Pinky was lucky enough to meet a couple members of the cast of Back to the Future. It’s one of my favorite films of all time and she was super lucky!

Hello, my lovelies. Pinky Lovejoy-Coogan here with a very heavy heart thinking about all the tragedies in the world today. Between Texas, Florida, Puerto Rico, and Las Vegas (am I forgetting anything in there?), it seems the sadness never ends and today especially feels like writing this article is the silliest thing in the world. Still, I suppose we could all use a distraction from our grief, so I’ve decided to submit a few pictures today. Sending love and light to all those affected by the horrible tragedies.

During our recent amazing adventure at the Salt Lake Comic Con, I was thrilled to see that a few of the fellow guests were cast members from Back to the Future that I hadn’t yet met (aside from Michael J. Fox, who is a pretty glaring omission to my collection) – Christopher Lloyd (who played “Doc”) and Tom Wilson (who played “Biff”). 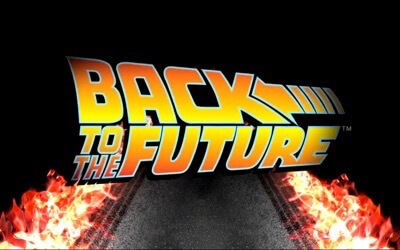 Now, even if you’re at a convention with someone, it doesn’t necessarily mean you’ll run into them. There are several factors involved (schedules, locations at the event, etc.), but I was contemplating purchasing the professional photo op that was being offered with Christopher Lloyd and a DeLorean because how often does that come around? Also, if you recall, we had a DeLorean at our wedding that we used for the getaway car since it was on October 26th (one of the dates on Back to the Future). 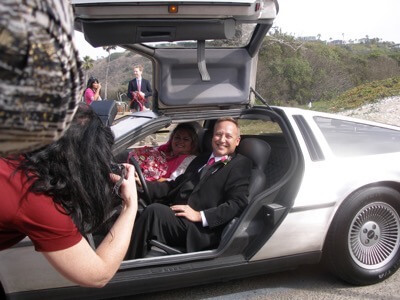 So, it seemed like something we needed to have. However, on the morning of the second day, we walked over to the transportation area (where they would pick us up and take us to the event) and lo and behold, Tom and Christopher were standing there chatting. As much as I wanted the pictures, I still wasn’t sure if they’d be willing to pose (but I had to try!). First I asked Tom, who was very nice. 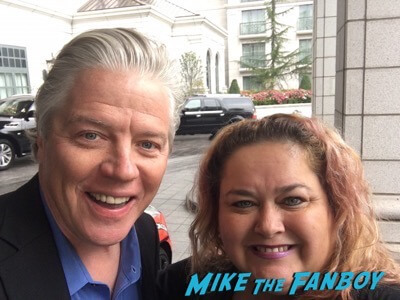 Then, Keith struck up a conversation with Mr. Lloyd about his portrayal of Uncle Fester in The Addams Family movie. He was very cordial and we had a lovely conversation. At the end, when we asked for a picture, he happily obliged! We were thrilled! Plus, he’s smiling! Great Scott!