First off, I must say… I have been so neglectful. I was going through some old messages and totally forgot to get this one posted! Bad fanboy Mike!

James was super lucky and won a Meet & Greet with Monty Python! I know! Super awesome! However, things didn’t go exactly as planned, in fact… It was a bit of a debacle! Doh! 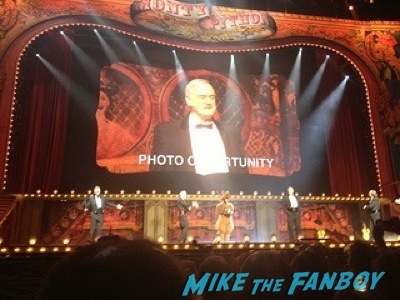 Firstly, can I start by saying this write up isn’t a criticism of Monty Python themselves, but of whoever is in charge of their ticket selling. A few days before my birthday, a friend of mine sent me a message to say she’d won tickets to one of Monty Python‘s final ever shows at the O2 Arena, and that I could be her +1 as a birthday present. Not only that, she’d won what was described as VIP Meet & Greet tickets! Amazing. I was so excited, even though it looked like I wouldn’t make it as I had to be in Leeds (a good two and a half hour train ride from London) for a meeting with work. All was well in the world when I was able to leave the meeting early, just manage to catch the train to London and race time to get to Greenwich and the O2 Arena by 7:30pm.  As it happened, I was about 10 minutes late, but thankfully so were the Pythons, so I didn’t miss the start. 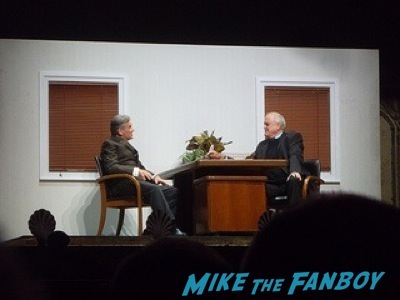 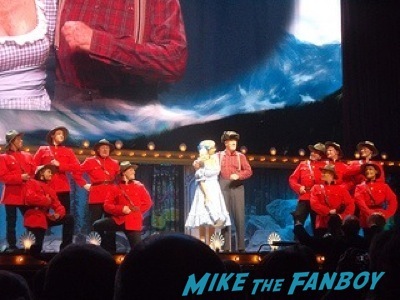 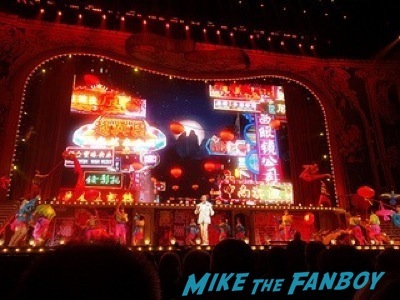 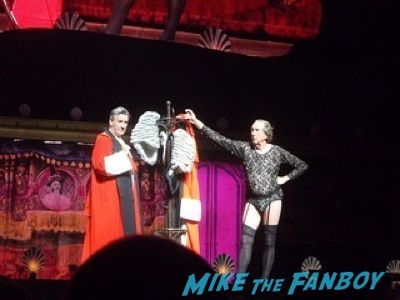 The show was absolutely awesome, I loved it. Getting to see John Cleese, Michael Palin, Eric Idle, Terry Jones and Terry Giliam perform some of their most well known sketches live was never something I thought I’d get to see in my life. We had awesome seats too, seven rows from the front.. which considering the O2 is a 25,000 capacity arena was pretty amazing. Now that the last (ever!) show has been and gone, I’ve no issue posting some photos from the evening. Seeing the Lumberjack Song, the Spanish Inquisition, Anne Elk, I Like Chinese, Sit on my Face, Spam, the Dead Parrot and loads of other sketches performed in front of me.. it was just the best. 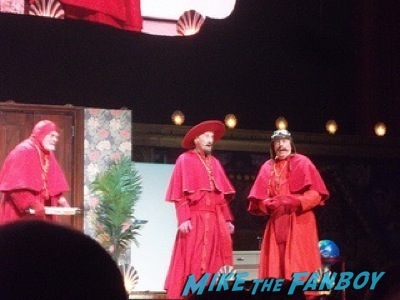 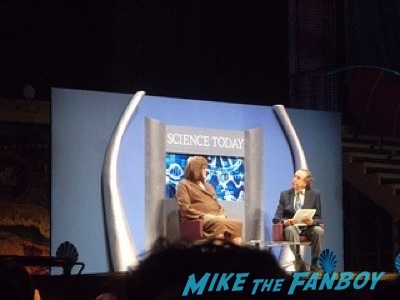 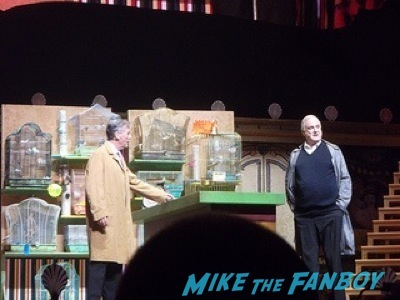 During the interval we got talking to the people sitting next to us. They’d paid £496 each for their tickets, which were the same package as what we had won. Yes, you read that right, £496. That’s about $800. For that price I’d expect a pretty special meet and greet. 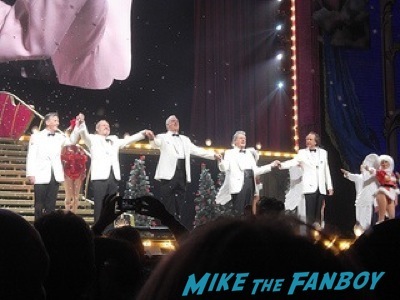 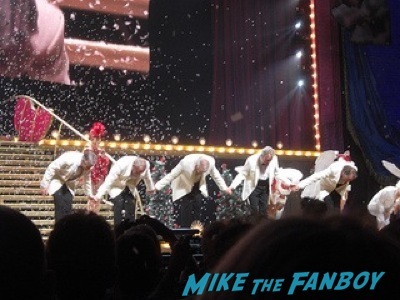 The show ended (with a super rendition of Always Look on the Bright Side of Life) and we went to pick up our M&G wristbands. This is where an awesome evening took a bit of a bad turn. We were all led up into a hot and small room (actually the second floor of a restaurant within the arena) where we got a goody bag containing a tour T Shirt, a mug, a copy of The Python’s Autobiography and a voucher for one free drink.

It was at this point we learnt that, well, the Meet & Greet package wasn’t. What was billed as an autograph and a group-photo with the 5 Pythons had changed at the last minute to a four minute (yes, I timed it) question and answer session. Why was this done? For logistical and security reasons. What? £496 and people were getting a four minute Q&A? I couldn’t believe it. Made worse by the fact that of the 60 or so people there, only 10 or so could actually see anything as no seating was provided, so it was a peer-over-the-person-in-fronts-head-or-see-nothing situation. They answered some questions (compered by a man who continuously interrupted the answers to get another question asked) and then they left. No photos. No autographs. No, well, anything. 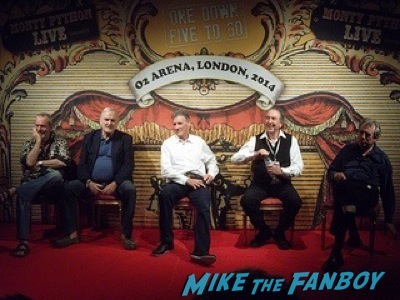 What’s worse, these weren’t corporate people from the city with too much money to spend, they were proper fans that had traveled the world for this night. People had to give their name and hometown when asking questions – people were from Sydney, Washington, New York, Finland, Sweden.. all over. They paid to meet their heroes, and didn’t. No one seemed to complain, I guess when you’re not used to this hobby you don’t know what to do.

Me & my friend however were rather unhappy at the whole thing, so we complained. We won a meet & greet, and didn’t get it. As a compensation, we were given (in a very hushed manner so other people didn’t see), free tour programmes signed by the five Pythons, which is pretty cool. 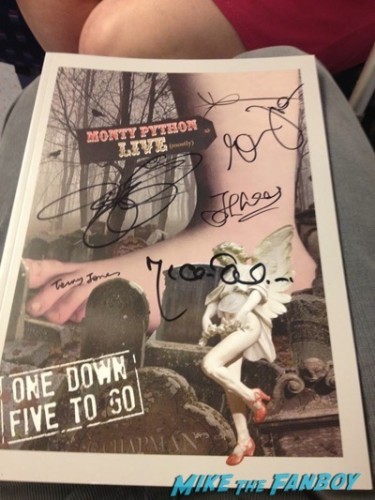 I certainly can’t complain about my experience as it was free, but for the paying fans? I was rather disgusted. I’d expect better from one of Britain’s most famous comedy groups of all time.