There’s always something fun about watching a disaster movie. Either you will fall in love with the characters and want them to succeed, or you’re going to cheer for the invading aliens/earthquake/giant monster to swallow them up. In the case with The Darkest Hour however, it’s none of the above.

Emile Hirsch and Max Mighella are two silicon valley software developers who head to Moscow to sell their app and God Willing make millions of dollars only to discover they were ripped off. That’s okay because aliens are going to destroy the planet in a few hours so you know, let’s gain some perspective.

They meet Olivia Thirlby and her blonde friend who are visiting the city on vacation. While drinking, aliens invade and wipe out the world. A great first date huh? The aliens arrive as glowing beams of light and after a pretty cool first sequence with a police officer getting shredded the world gets thrown into chaos. 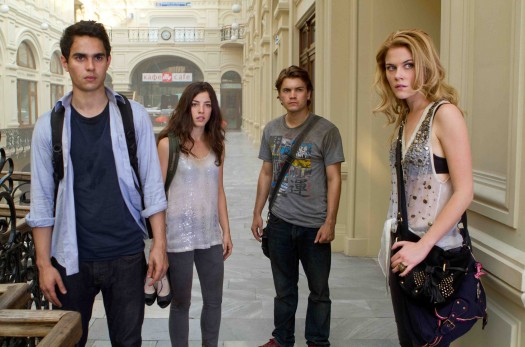 Our silicon valley heroes run and hide in a basement as Moscow gets overrun and awake to see every person eviscerated. The aliens are invisible to the human eye and only appear as electrical currents but if you get too close you get shredded in a variety of different ways with the outcome… well… being you’re shredded.

I like Emile Hirsch, I thought he was great in Milk and Into the Wild even if Speed Racer was an embarrassment. Here he gets stuck with having to try and play the hero and even though he gives it his all he never becomes the “hero” character. Olivia Thirlby fares better and is quite believable as the scared but strong heroine.

But who cares about the humans? This is a disaster film and they are only here to serve as fodder to be destroyed right? Using the premise of invisible aliens is a nice trick, I’m sure it saved money, but really it robs the audience of the thrill of seeing them use the humans as road fodder. The shredding is cool for the first few times but lets face it how many different ways are there to shred someone? Shred them face on, shred them to the side, shred them from behind, etc… After a while you go, you know… They’re just being shredded.

I will say though, the “invisible alien” premise was used as effectively as they filmmakers could. I didn’t think a ringing cell phone could sound ominous (except when I hear my mom’s unique ring tone, lol) but taking a cue from Spielberg they try really hard.

Plus, using Moscow as a backdrop was a good choice. It’s not New York or Los Angeles and since the main characters are in a foreign city as well as the viewer it makes you relate a little.

The biggest problem I had with the film was the alien reveal. They were just spinning digital rock like creatures that could get zapped with a microwave gun. What if everyone in the world decided to pop in some microwave popcorn during the invasion? Would the world be saved? But I digress… j

Overall, the Darkest Hour is kind of fun B-Grade thriller stuff. It’s nothing you haven’t seen before but that’s part of the fun.

Also make sure and check out the Blu Ray special features. There’s a really good doc called The Darkest Hour Visualizing An Invasion that has the filmmakers talking about how they pitched the project, and then brought it from concept into reality which is really cool.

Plus, there is a short film that shows some of the survivors in Malibu California. It’s a cool supplement that you should check out. 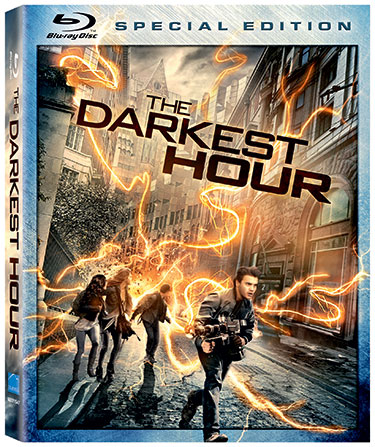