To the surprise of no one at all, one of the toughest panels to get into at New York Comic Con was The X-Files panel which included a screening of the first episode. Early buzz continues to say that the new season is off with a bang! For those who didn’t get up before the crack of dawn, Fox sent over some spoiler-free highlights from the panel with Chris Carter, David Duchovny and Mitch Pileggi! 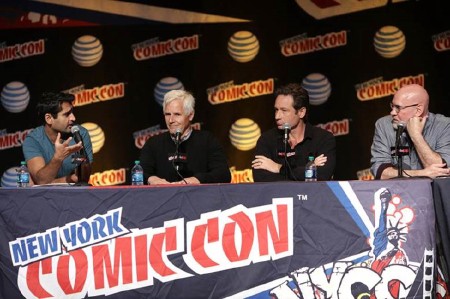 Showrunner Chris Carter talks about why it’s the perfect time for The X-Files to come back:

David Duchovny and Mitch Pileggi talk about how easy it was to work with each other again:

Chris Carter reveals that the new season will begin and end with “mythology” episodes which deal with the bigger conspiracy story. The four episodes in-between will be stand-alone stories. Chris also mentioned that fan-favorite writers will be back and he answers if the Lone Gunman will be back as well:

Fox has also released a Mad-Men-opening-credits-type trailer for the news season as well:

It’s all a big tease, isn’t it? Sigh! January seems so far away…

The new season of The X-Files will begin on Fox starting Sunday, January 24th (after the big NFC Championship game so be aware the time may be flexible!) and will move to its regular Monday night time slot the next day.