The Cruel Prince by Holly Black 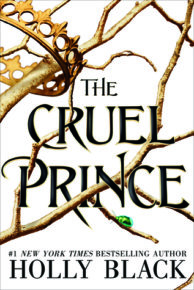 Pitch: One of my favorites of 2018, this is a new Fae series from Holly Black

Story: “Jude was seven years old when her parents were murdered and she and her two sisters were stolen away to live in the treacherous High Court of Faerie. Ten years later, Jude wants nothing more than to belong there, despite her mortality. But many of the fey despise humans. Especially Prince Cardan, the youngest and wickedest son of the High King.

To win a place at the Court, she must defy him–and face the consequences.

In doing so, she becomes embroiled in palace intrigues and deceptions, discovering her own capacity for bloodshed. But as civil war threatens to drown the Courts of Faerie in violence, Jude will need to risk her life in a dangerous alliance to save her sisters, and Faerie itself.”

Quick take: My first Holly Black book and definitely not my last! It’s a beautiful, twisted and cruel world with characters you’ll love and despise. The story is also so original with lots of twists and an ending that sets up a wild new series. 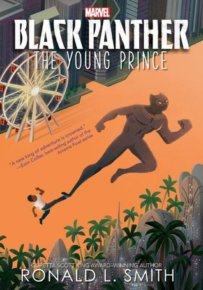 Pitch: A look at T’Challa before he comes the Black Panther in this story about friendship, change and family.

This is his destiny. But right now, he’s simply T’Challa-the young prince.

Life is comfortable for twelve-year-old T’Challa in his home of Wakanda, an isolated, technologically advanced African nation. When he’s not learning how to rule a kingdom from his father-the reigning Black Panther-or testing out the latest tech, he’s off breaking rules with his best friend, M’Baku. But as conflict brews near Wakanda, T’Challa’s father makes a startling announcement: he’s sending T’Challa and M’Baku to school in America.

This is no prestigious private academy-they’ve been enrolled at South Side Middle School in the heart of Chicago. Despite being given a high-tech suit and a Vibranium ring to use only in case of an emergency, T’Challa realizes he might not be as equipped to handle life in America as he thought. Especially when it comes to navigating new friendships while hiding his true identity as the prince of a powerful nation, and avoiding Gemini Jones, a menacing classmate who is rumored to be involved in dark magic.

When strange things begin happening around school, T’Challa sets out to uncover the source. But what he discovers in the process is far more sinister than he could ever have imagined. In order to protect his friends and stop an ancient evil, T’Challa must take on the mantle of a hero, setting him on the path to becoming the Black Panther.”

Quick take: Mystery, action, friendship, growing up, growing apart, there’s a lot in this look at T’Challa’s early years. Lots of heart with action, young Black Panther fans will enjoy this early adventure before T’Challa becomes the Black Panther. (One month until the movie comes out!) 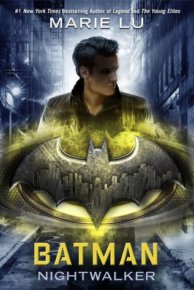 Story: “Before he was Batman, he was Bruce Wayne. A reckless boy willing to break the rules for a girl who may be his worst enemy.

The Nightwalkers are terrorizing Gotham City, and Bruce Wayne is next on their list.

One by one, the city’s elites are being executed as their mansions’ security systems turn against them, trapping them like prey. Meanwhile, Bruce is turning eighteen and about to inherit his family’s fortune, not to mention the keys to Wayne Enterprises and all the tech gadgetry his heart could ever desire. But after a run-in with the police, he’s forced to do community service at Arkham Asylum, the infamous prison that holds the city’s most brutal criminals.

Madeleine Wallace is a brilliant killer . . . and Bruce’s only hope.

In Arkham, Bruce meets Madeleine, a brilliant girl with ties to the Nightwalkers. What is she hiding? And why will she speak only to Bruce? Madeleine is the mystery Bruce must unravel. But is he getting her to divulge her secrets, or is he feeding her the information she needs to bring Gotham City to its knees? Bruce will walk the dark line between trust and betrayal as the Nightwalkers circle closer.”

Quick take: A good mystery, cool gadgets and haunted by his childhood trauma = definitely Batman! (I had Tim Burton’s Batman theme in my head the whole time.) A light and fun read as Bruce Wayne begins to grow up and the seeds of Batman take root. It’s great to see some familiar faces and get some new ones as well. 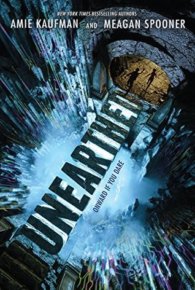 Pitch: An enjoyable mash up between Indiana Jones and space opera

Story: “When Earth intercepts a message from a long-extinct alien race, it seems like the solution the planet has been waiting for. The Undying’s advanced technology has the potential to undo environmental damage and turn lives around, and Gaia, their former home planet, is a treasure trove waiting to be uncovered.

For Jules Addison and his fellow scholars, the discovery of an alien culture offers unprecedented opportunity for study… as long as scavengers like Amelia Radcliffe don’t loot everything first. Mia and Jules’ different reasons for smuggling themselves onto Gaia put them immediately at odds, but after escaping a dangerous confrontation with other scavvers, they form a fragile alliance.

In order to penetrate the Undying temple and reach the tech and information hidden within, the two must decode the ancient race’s secrets and survive their traps. But the more they learn about the Undying, the more their presence in the temple seems to be part of a grand design that could spell the end of the human race…”

Quick take: Fans of the Starbound books will particularly love this new series which has similar levels of world building and simmering romance. There’s even a familiar survival theme, but this one is packed with more action and a bigger mythology.

Meet Cute by a whole bunch of authors (see below) 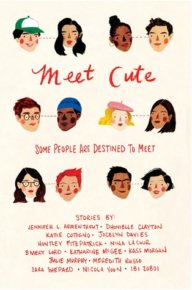 Pitch: A collection of short stories featuring the first moment a couple meets

Story: “Whether or not you believe in fate, or luck, or love at first sight, every romance has to start somewhere. MEET CUTE is an anthology of original short stories featuring tales of ‘how they first met’ from some of today’s most popular YA authors.

Readers will experience Nina LaCour’s beautifully written piece about two Bay Area girls meeting via a cranky customer service Tweet, Sara Shepard’s glossy tale about a magazine intern and a young rock star, Nicola Yoon’s imaginative take on break-ups and make-ups, Katie Cotugno’s story of two teens hiding out from the police at a house party, and Huntley Fitzpatrick’s charming love story that begins over iced teas at a diner. There’s futuristic flirting from Kass Morgan and Katharine McGee, a riveting transgender heroine from Meredith Russo, a subway missed connection moment from Jocelyn Davies, and a girl determined to get out of her small town from Ibi Zoboi. Jennifer Armentrout writes a sweet story about finding love from a missing library book, Emery Lord has a heartwarming and funny tale of two girls stuck in an airport, Dhonielle Clayton takes a thoughtful, speculate approach to pre-destined love, and Julie Murphy dreams up a fun twist on reality dating show contestants.

This incredibly talented group of authors brings us a collection of stories that are at turns romantic and witty, epic and everyday, heartbreaking and real.”

Quick take: With authors from a mixed bag of genres, this collection has a wide scope of inclusive stories. Every time I read an anthology, I always discover an author who is new to me. Jocelyn Davis has an adorable and clever story about an adorable and clever girl. Shout outs to Jennifer Armentrout for another winner and to Dhonielle Clayton and Nicola Yoon for some really imaginative stories. 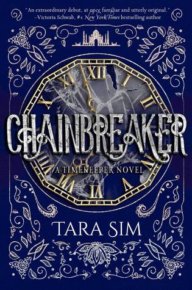 Pitch: The sequel to Timekeepr, a gay steampunk fantasy where clocks control time and start to break down

Story: “Clock mechanic Danny Hart knows he’s being watched. But by whom, or what, remains a mystery. To make matters worse, clock towers have begun falling in India, though time hasn’t Stopped yet. He’d hoped after reuniting with his father and exploring his relationship with Colton, he’d have some time to settle into his new life. Instead, he’s asked to investigate the attacks.

After inspecting some of the fallen Indian towers, he realizes the British occupation may be sparking more than just attacks. And as Danny and Colton unravel more secrets about their past, they find themselves on a dark and dangerous path–one from which they may never return.”

Quick take: Fans of Timekeeper will enjoy digging deeper into the origin of the clock tower spirits. The emphasis of this book is on the plot which is quite complex with more characters and more themes to tackle in a whole new setting. 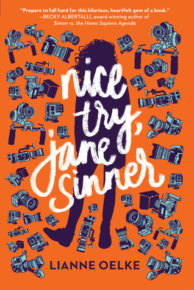 Pitch: Contempary YA novel about a girl who enters a reality show competition

Story: “The only thing 17-year-old Jane Sinner hates more than failure is pity. After a personal crisis and her subsequent expulsion from high school, she’s going nowhere fast. Jane’s well-meaning parents push her to attend a high school completion program at the nearby Elbow River Community College, and she agrees, on one condition: she gets to move out.

Jane tackles her housing problem by signing up for House of Orange, a student-run reality show that is basically Big Brother, but for Elbow River Students. Living away from home, the chance to win a car (used, but whatever), and a campus full of people who don’t know what she did in high school… what more could she want? Okay, maybe a family that understands why she’d rather turn to Freud than Jesus to make sense of her life, but she’ll settle for fifteen minutes in the proverbial spotlight.

As House of Orange grows from a low-budget web series to a local TV show with fans and shoddy T-shirts, Jane finally has the chance to let her cynical, competitive nature thrive. She’ll use her growing fan base, and whatever Intro to Psychology can teach her, to prove to the world—or at least viewers of substandard TV—that she has what it takes to win.”

Quick take: It’s an interesting idea and format, but I couldn’t connect with the main character. I love snark, but Jane is so snarky that she feels abrasively confident which is a turn off to me and I couldn’t finish the book. If aggressively confident characters are your thing (and there are some folks who love Jane), you may enjoy this more than I did.

Thanks to Little, Brown (The Cruel Prince), Disney Hyperion (Black Panther; The Young Prince, Unearthed), Random House (Batman: Nightwalker), HMH (Meet Cute, Nice Try, Jane Sinner) and Sky Pony (Chainbreaker) for providing the books for review. Want more details on my impression of these and other books? Check out my ratings and full reviews at Goodreads. 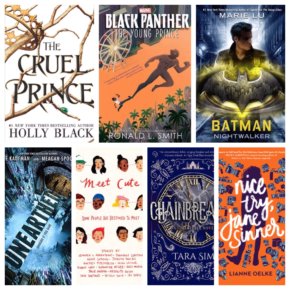