Yesterday, when I heard that Fast And Furious star Paul Walker died suddenly in a car accident, I was shocked to say the least. Not only was his life cut tragically short, but he was actually in a couple movies I love. Pleasantville, The Skulls, Joyride, etc…

The amazing Lindsay from I am not a stalker, which if you haven’t checked out her site and I’m sure you have, but if you haven’t you need too, volunteered to write a wonderful memorial and share her experience of meeting the dearly departed star.

My parents ingrained in me from a young age that life is not fair. They also taught me to believe in karma, though, so when bad things happen to good people, my brain can’t make sense of it. Such was the case last night when I learned that Paul Walker had passed away in a car accident.

I met Paul exactly a year ago today (how’s that for eerie?). I was stalking the wedding of The Bachelorette’s Ashley Hebert and J.P. Rosenbaum at the Langham Pasadena hotel on December 1st, 2012. Upon first arriving at the property, my husband and I decided to do a walk-through of The Tap Room to see if any Bachelor or Bachelorette stars were in there grabbing a drink. None were, but I just about had a heart attack upon seeing Paul Walker sitting at the bar, laughing merrily with the bartender. I desperately wanted a picture with him, but am leery of approaching celebrities inside of restaurants, where they might not want attention drawn to them. My husband, who hates it when I act like a chicken, told me to go wait around the corner, in an area away from other patrons, and that he would ask Paul if he minded posing for a photo. As it turned out, Paul didn’t mind at all, but he could not understand why I was waiting in an out-of-the-way spot. He said, “We can take the picture right here” and wound up posing with me in the middle of the bar, completely unbothered by the fact that doing so would likely cause countless other bar patrons to approach him. After our photo, Paul said good-bye and went back to his seat at the bar and continued chatting with the bartender. Several hours later, he happened to walk by me near the hotel lobby and smiled and waved. Looking back now, the thought that he had less than a year to live is heartbreaking. 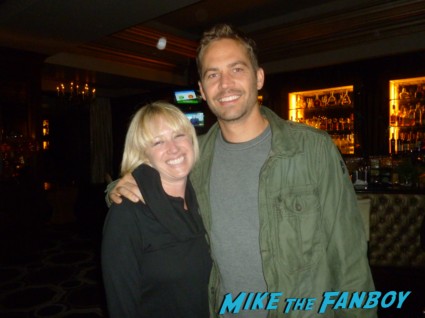 My cousin Alexandra also had the pleasure of meeting Paul in May 2012 at Fat Hen Grocery in New Orleans. He was in town filming the movie Hours at the time. Alex had just graduated from Loyola University and was grabbing lunch with her mom and some friends and happened to spot Paul a few tables away. Her mom immediately texted me and I said to ask for a picture. They waited until he was done eating and followed him outside. Paul was incredibly nice to them, chatted for a bit and happily posed with the group. 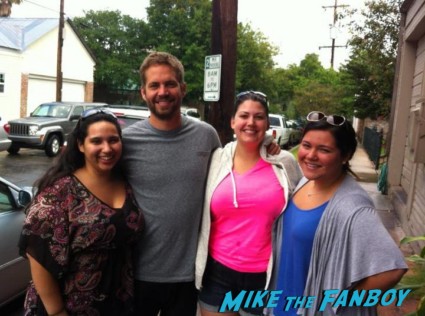 I was never a fan of Paul’s movies, per se. I’ve never even seen The Fast and the Furious (I know, I know). But I am a fan of those celebrities who are kind to their fans and Paul was one of the kindest I’ve encountered. It’s true what the song says – only the good die young.