Ohhh Mysteries! Spies! and Revenge… Sounds like a typical day here at the Mike The Fanboy offices… Or… Maybe not.

For this weeks Written Revelry, The Novel Strumpet is doing a great review of the new novel Peregrine Harker & the Black Death by Luke Hollands.

Peregrine Harker’s about to learn you’re never too young to die.

London 1908: A secret society stalks the murky streets, a deadly assassin lurks in the shadows and a series of unexplained deaths are linked by a mystery symbol…

When boy-detective Peregrine Harker stumbles across a gruesome murder he sparks a chain of events that drag him on a rip-roaring journey through a world of spluttering gas lamps, thick fog, deadly secrets and dastardly villains.
Every step of Peregrine’s white-knuckle adventure brings
him closer to the vile heart of a terrifying mystery – the true story behind the Brotherhood of the Black Death.

Peregrine is fifteen so he’s really more teen than boy detective, and orphan is a bit misleading. His explorer parents went missing years ago in Peru and for me: no body = no death. It also seems that a taste for action, adventure and danger runs in the family.

A lover of Penny Dreadfuls, Peregrine has a hard time reporting on boring subjects, which means he generally turns in fantastical stories his editor cannot publish. He’s given one more chance to redeem himself and is sent to speak to a tea merchant about the sudden rising price of tea due to missing cargo. How will the Empire cope? Not something Peregrine finds exciting enough at all, so when he spies two sketchy characters on the docks, apparently up to no good, he decides to investigate. Unfortunately he’s caught and finds himself locked up in a coffin.

That’s not the only scrape our hero gets into: underground boxing matches, daring escapes through tunnels in Paris, motorcar chases, informants turning up dead, a childhood rival, a girl with a penchant for showing up in dangerous situations, and an order known as The Black Death out to stop Peregrine and anyone who gets in their way. It seems there’s a lot more to this missing tea business than previously thought. This is confirmed when Peregrine runs into his slightly older cousin Archie Dearlove who tells him there’s a smuggling ring tied into all this and that he’d like Peregrine’s help solving the mystery! Finally, a story Peregrine can really sink his journalistic teeth into. If he doesn’t die in the meantime. 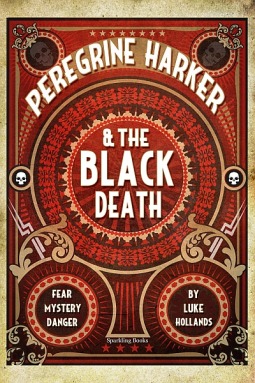 I admit I figured out the villain basically the moment they were introduced but that’s an annoying trait I have, ask any of my friends. Doesn’t mean I didn’t enjoy the book. I like the fact that being an amateur he doesn’t necessarily do everything right and needs quite a bit of help, but he isn’t completely inept and I think as the series (I’m pretty sure that’s where we’re heading) goes on he’s going to get more and more comfortable in this new world. He definitely has the nerve for it.

The cast of characters is colorful and the author does a great job of introducing the time period without getting too descriptive, which I think is very important in a book geared to younger audiences.

Overall the story is a lot of fun, but despite Peregrine’s age it reads more for a younger crowd, and given everything kids are exposed to in media today, I think the murders aren’t really all that shocking. Definitely 10yrs+.