Let’s get physical, physical, let’s get into physical… How I love that song! Even though when I watch the video I get creeped out… Why is that? It’s just a creepy video! LOL… Still Olivia Newton John will always be Sandy from Grease to me. Grease is one of those classics that a generation of people grew up with. I mean… It’s just such a fun movie! I love it!

Anyway, this isn’t about me, I know you’re shocked! But this my dear friends, is Pretty In Pinky, and Pinky loves her some Olivia Newton John! Ah, Summer lovin’ it happened so fast… Summer lovin’ I had a blast… Okay, those are probably the wrong lyrics… DOH!

Before I embarrass myself further, I will let Pinky do the talking! Take it away your pinkness!

Hello, my lovelies. Pinky Lovejoy here to talk about one of my all-time dreams coming true: I met Olivia Newton-John!!! Can you believe it? Sandy herself! Now, like most girls born in the ‘70s exposed to a healthy serving of the movie Grease, there was nothing I wanted more (well, except for becoming a Pink Lady –

how do I do that? Is there a special form I need to fill out?? I’ve been waiting for *quite* some time now) than to have Danny Zuko fall in love with me and serenade me at a school carnival. 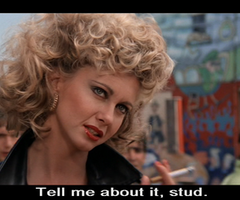 We watched that movie so many times in my household my parents finally had to ban it. Not that it stopped us, of course – we wore that tape out until it could barely function (yes, it was on a VHS tape warped beyond belief – it played up until the finale song mix at the end and then all the dancers legs started wobbling). 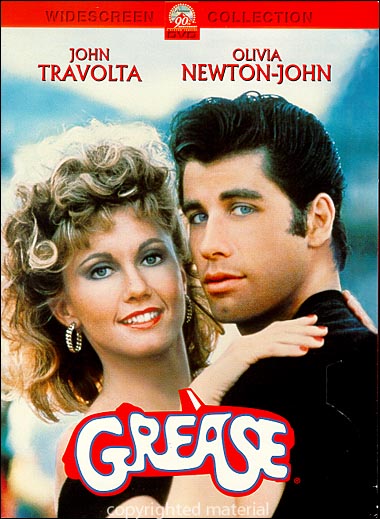 Actually, my love affair with Olivia began when she was in Xanadu (which is the first movie I ever saw in a movie theater). When Olivia and her seven sisters in the movie came to life from that wall painting and started roller skating around, I thought my head would explode. In fact, it may have exploded. I can’t be sure. 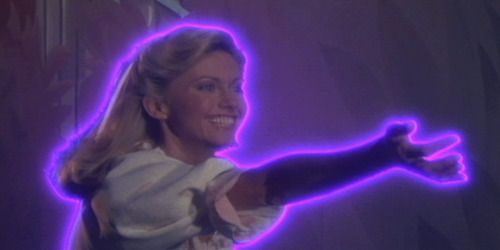 Olivia Newton-John was the epitome of every wonderful thing in the world and I wanted to grow up and be just like her. I sang her song in a talent show in fourth grade. I curled my hair like her. I practiced saying, “Tell me about it, Stud.” I was sure that one day I’d wake up and be Olivia. It could happen, right? 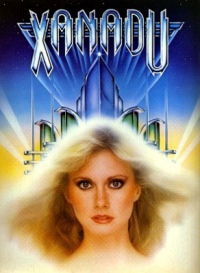 But, enough about my silly fantasies. Last week my dream became a reality when Olivia appeared at a movie premiere in the LA area. As there were other events going on that night, I had a feeling it might be the perfect low-key opportunity to try and get a picture with her and, sure enough, my gut feeling proved correct. There were only three of us waiting outside and when she arrived with her husband, she was very cordial and pleasant, despite being a bit frazzled about who was supposed to meet her outside for the event.

Although I felt like there were so many things I wanted to say to her (beginning with Xanadu being my first movie, how amazing I think she is, and how I wanted to be just like her), I think the only thing I was able to squeak out (and I can’t even be sure I said anything at all. Lindsay promises I did, but who knows) was that I was a big fan. On the plus side, I didn’t cry, shake, become unable to speak, or say something too stupid as I often do, so that’s good. 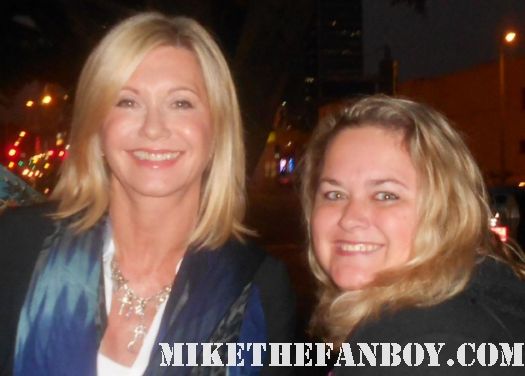 I still have to pinch myself that it even happened. Olivia Newton-John! The seven-year-old version of me would’ve fainted. I’m still so excited I can hardly stand it and it’s been over a week since it happened. Thank you, Olivia, for being as sweet and lovely as I always hoped you’d be. Thank for all the amazing entertainment over the years and for being such a fun role model. I’ll always appreciate it. For additional pink fodder, please visit: www.pinkylovejoy.com. As always, have a pink day!