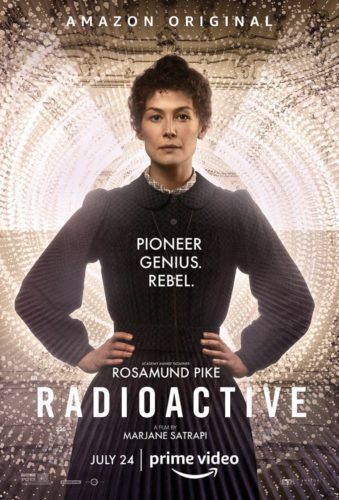 Science breakthroughs come in all shapes and sizes. However, one of the most magnificent discoveries, which shattered scientific communities, came from the Polish-born Marie Sklodowska (Rosamund Pike), whose pioneering efforts revolutionized the late 19th and early 20th century. Upon meeting fellow scientist Pierre Curie (Sam Riley) in Paris, the pair fall in love and together change physics and the scientific community for better and worse.

Rosamund Pike’s prominence continues captivating audiences and has transformed the thespian from just another pretty face into something spectacular. Pike’s persistence is starting to pay off with recent remarkable turns like “A Private War” and “Gone Girl” generating more prestigious attention. Pike effortlessly captures Curie’s courage, drive and ambition with another peak performance. “Radioactive” maintains the classic caricature of vintage Hollywood, especially the 1930s and 1940s biopics. Initially I anticipated a film like “The Story of Louis Pasteur” however it soon became a run-of-the-mill biopic about scientists. Although clearly a far superior film than “Madame Curie” (1943), it lacks that experimental explosion to truly transform into something special. Nonetheless Rosamund Pike is the main reason to watch. 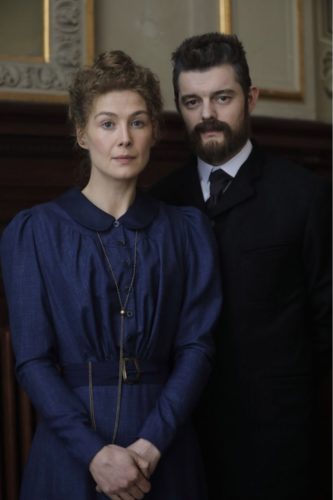 Pike’s performance showcases her undeniable talent throughout and why she definitely deserves more meaty roles. Sadly, there is really not a standout scene, which catapults the film or elevates it to another level. The chemistry between Sam Riley and Pike work yet there are missing ingredients to fully flush out the formula, making “Radioactive” lackluster. There are constant struggles to connect with the characters and generate enough energy to make an impact. Most experiments explore the possibilities, but beyond the glossary examination “Radioactive” can’t test out its hypothesis despite presenting wonderful material on paper. 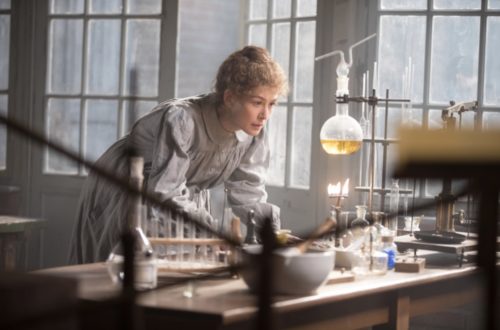 “Radioactive” remains a wonderful introduction to the luminary and two-time Nobel Prize winner Marie Curie, however those expecting something beyond a derivative, distracted biopic might not appreciate the inconclusive results. Elementally, its sadly similar to bumbling biopics like “Tolkien,” “Colette,” and “Mary Queen of Scots.” Despite its clumsy characters and storyline, Pike’s presence overshadows the imperfections. However, the best surprise is Anya Taylor-Joy (“The Witch” and “Emma”), who evokes engaging and entertaining performances despite minimal screen time much like a young Kate Winslet. 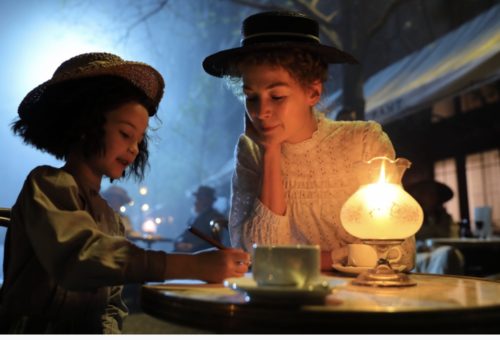 For nearly two hours, “Radioactive” has enough enjoyable moments to justify viewing, but the uneven story structure struggles to overcome erratic editing and frequent flash forwards/flashbacks throughout. Curie’s incredible story stumbles with atrocious and awkward creative choices failing to properly ignite much like a Bunsen burner needing gas. After assessing this experiment and analyzing the scientific method, “Radioactive” is a dreary scientific costume drama diminishing the legacy of Madame Curie.