My God, it feels like it’s so close and yet so far away. How is time going so fast? Seriously, it’s like flying by. We are going to blink and it’s going to be 2014. lol…

Well, along with the promo blitz, the signings, the panels… There are the exclusives. Yep, for toy collectors it’s a paradise with items made just for the con itself and only for attendees.

Entertainment Earth has just released their exclusives and varients for the con.

Some are super damn epic! There will be 20 items total and there are pre order links up on the entertainment earth website now.

check out the revealed items below!

Entertainment Earth Convention Exclusive! Bif Bang Pow! had to do something special for (potentially) the last season of Dexter on Showtime. If you’ve collected Bif Bang Pow!’s Dexter action figure line over the years, you know that each figure comes with a unique blood slide featuring one of Dexter’s victims. Stepping it up this year, this cool set includes a Dexter Blood Spatter Analyst 3 3/4-inch Action Figure Exclusive sporting his camera, ID badge, and a little extra blood. The set also contains not 1, but 6 blood slides to help you complete your victim collection! Store your blood slides in the included 7 1/2-inch long x 4 1/4-inch wide x 2-inch tall wooden blood slide box replica, and hide them inside this air-conditioner-themed tin tote that measures approximately 8 5/8-inches wide x 6 3/4-inches tall x 4-inches deep. A bonus talking key chain is also included! This is a must-have item for fans and completists alike.

In the super-popular Showtime TV series, Dexter is a blood-spatter expert for the Miami Police Department by day that spends his nights going after serial killers and other bad people. 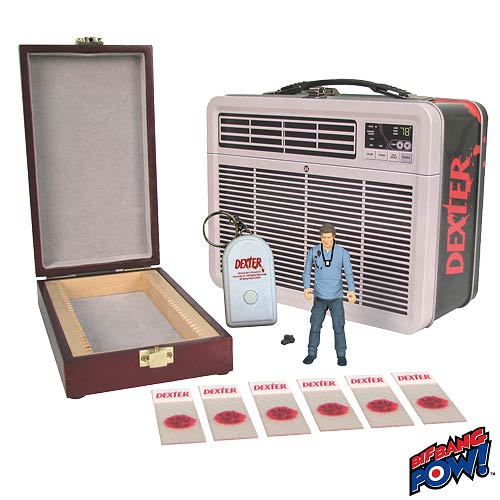 Kicking off Bif Bang Pow!’s highly anticipated 7-inch line of Star Trek bobble heads is the “Build-a-Bridge” concept. Collect all 8 characters to build a mini-replica of the bridge of the U.S.S. Enterprise 1701-D! Each of the 8 bobbles is sold separately.

Starting off the line is a Convention Exclusive Wesley Crusher, available first at San Diego Comic-Con 2013. Ensign Wesley Crusher was a very popular character in Star Trek: The Next Generation. The son of Dr. Beverly Crusher, Wesley is shown here seated at a detailed L-shaped console on the bridge of the Enterprise. A limited edition of just 2,500 pieces, he measures approximately 6-inches tall and features an amazing resemblance to actor Wil Wheaton! Ages 14 and up.

This very special series of 8 Star Trek Build-a-Bridge Deluxe Bobble Heads connect together to form the bridge of the U.S.S. Enterprise! Made of resin, each stands about 7-inches tall, including the base piece, and bears a remarkable likeness to the actor who played the part in the Next Generation TV show. Don’t miss a single one!

One of the largest cult phenomena of our time, Star Trek is a science-fiction entertainment franchise based on a fictional universe created by Gene Roddenberry. It includes a multitude of television series, movies, video and computer games, novels, and more depicting an optimistic future in which mankind has risen above past frailties and vices to unite with other intelligent species in the galaxy to explore the cosmos, discover new worlds, and encounter new civilizations – “To boldly go where no one has gone before!” 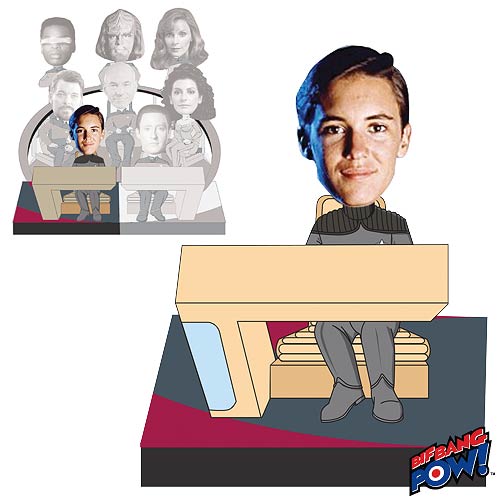 Steve Austin in action! In blazing red and white, the Six Million Dollar Man streaks across the front and back of this 14-ounce travel mug like a man possessed. Loyal fans will want to take this mug with them wherever they may run! Fashioned of durable plastic and stainless steel, it’s BPA free. Hand wash only. Not dishwasher safe. Do not microwave. Thoroughly hand wash before first use.

Set your new mug down on one of the 4 coasters included in the gift set. Made of tin with a cork bottom, they feature a similar image of the astronaut colonel in multiple colors and measure approximately 4 1/4-inches in diameter.

The Six Million Dollar Man is an American television series about a crippled test pilot and former astronaut who is rebuilt with nuclear-powered limbs and bionic implants. Working for the OSI, he serves as a truly one-of-a-kind intelligence agent. The popular show aired on the ABC network as a regular series from 1974 to 1978. 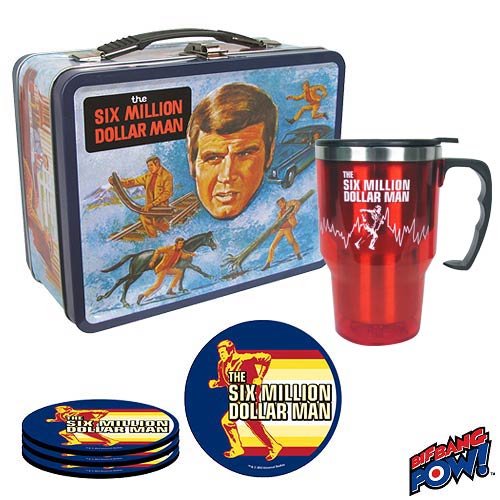 Celebrating 50 years of Doctor Who, Bif Bang Pow! produced this stunning high-quality journal given by the Doctor to his wife. River Song’s Deluxe Journal is a fully usable journal that measures 7 1/4-inches tall x 5 1/4-inches wide x 1 5/8-inches thick and contains 440 textured-paper pages. A limited edition of just 550 pieces, the embossed leather-like vinyl hardcover book mimics the look of the TARDIS. Be sure to look inside for a unique page of artwork that contains a secret hidden message!

Of all the people who have traveled with the Doctor, River Song is the most enigmatic of all. She always seems to be one step ahead of the Doctor, even when he’s in her past. Nobody has been able to figure out how River knows the Doctor so well, although there have been plenty of guesses! River carries a small blue book with her wherever she goes, which seems to be a diary of her past and the Doctor’s future. Whatever is written within, River will only say one word about her book – “Spoilers!”

TARDIS stands for Time And Relative Dimension In Space and looks just like a wooden Police phone box from the 1950s on the outside, but is of infinite proportions on the inside. This incredible time machine is piloted by the Doctor, a mysterious Time Lord, and is able to transport him anywhere through time and space, disappearing in one place and reappearing somewhere new.

Produced by the BBC, Doctor Who is the longest-running sci-fi TV series in the world. The award-winning show presents the adventures of a time traveler known simply as “the Doctor.” Along with his companions, this mysterious Time Lord journeys through time and space using his TARDIS, which appears from the outside to be an ordinary police phone booth. 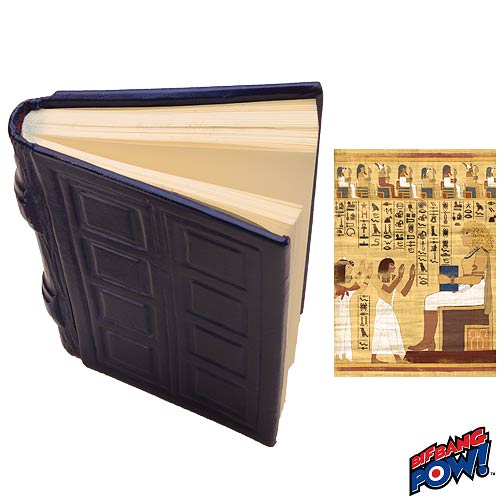 When the folks at Bif Bang Pow! wanted to come up with a fantastic Battlestar Galactica 35th Anniversary item, they could only think of one thing – that ridiculously retro lunchbox they had when they were kids in 1978. They bought an old rusted one off of eBay, scanned it, painstakingly touched it up, and updated it for today. Now totally cool again and completely licensed, this sensational Battlestar Galactica Tin Tote measures approximately 8 5/8-inches wide x 6 3/4-inches tall x 4-inches deep. It presents stylized images from the 1978 BSG pilot episode “Saga of a Star World,” and the best part is that it contains three exclusive 8-inch scale, retro-styled EMCE action figures of the same characters shown on the box: Boxey, Muffit, and a Tucana Singer. A limited edition of just 1,500 pieces, the Battlestar Galactica Retro Tin Tote Gift Set belongs at your house! Ages 14 and up.

Direct from the 1978 science-fiction television series Battlestar Galactica, these 8-inch scale action figures feature multiple points of articulation, episode-specific fabric clothing, and a retro style reminiscent of the bestselling “Mego” action figures of the 1970s and 1980s. Fan-favorite Boxey stands about 6-inches tall and is dressed in a blue shirt, vest, and pants. Isn’t he adorable? Good ol’ Muffit measures approximately 5 1/2-inches tall in his “fur” suit with metallic-silver vinyl details, and the 4-eyed, 2-mouthed Tucana Singer stands tall at 8-inches in her shiny turquoise-colored dress and matching beaded collar!

In the 1978 BSG pilot episode “Saga of a Star World,” Starbuck and Boomer encounter a species of Tucana singers on Carillon. These humanoid beings are 4-eyed and 2-mouthed, with the lower mouth able to generate a powerful low pitch capable of breaking glass.

Battlestar Galactica (BSG) is an immensely popular franchise of television series and sci-fi films, the first of which aired in 1978. Books, comic books, and video games followed. In Battlestar Galactica, The Twelve Colonies – a civilization of human beings in a far-off sector of the universe – are at war with the cybernetic Cylons. The Cylons lay waste to The Colonies, decimating their worlds and populations, and the survivors flee aboard any spacecraft they can find, including the Battlestar Galactica, the only military ship in the Colonial Fleet to survive the Cylon attack. Battlestar Galactica’s renowned commander and his crew then lead the ragtag flotilla of survivors in search of a new home, the mythical planet Earth. 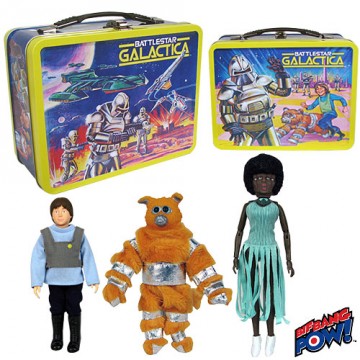 The most easily recognized (and arguably the most popular) character in the hit CBS series NCIS is that irreverent young Goth-girl lab tech, Abby Sciuto. Bif Bang Pow! brings you Abby as you’ve never seen her before, as a captivating 4 1/2-inch tall resin mini bobble head in the image of actress Pauley Perrette. A limited edition of just 2,600 pieces, Ms. Sciuto attaches to the top of your computer monitor with a non-damaging adhesive pad. She’s a must-have for any NCIS addict! Ages 14 and up. 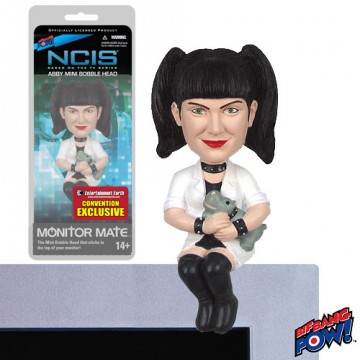 Coast into the final frontier while protecting your Earth-bound furniture with this astonishing set of 40 coasters derived from the Star Trek: The Original Series Art Program that includes inspiration from The Original Series with 80 movie-style pieces of art eclipsing every episode of the initial Star Trek television series, including the first pilot. Crafted of cork backed, laminated wood and arriving in a laminated-wood Enterprise box, each coaster measures approximately 5 3/4-inches tall x 3 3/4-inches wide and displays a 4-color image unique to a specific poster and episode. Beam them into your collection now! 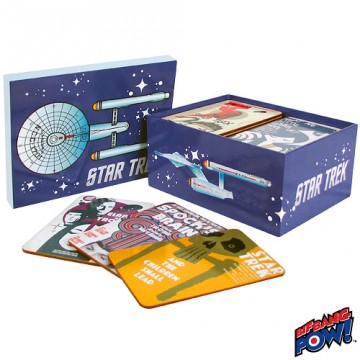 This follow-up to our first Venture Bros. Tin Tote Gift Set (with Rusty Venture and Jonas Venture Sr.) features an entirely new and exclusive tin tote with original artwork specifically commissioned for and designed by the creators of The Venture Bros. for this set. The tote comes packaged with exclusive fully articulated 8-inch scale EMCE action figures of Death’s Head Panoply Battle Armor Monarch and Dr. Mrs. The Monarch, as well as 3 1/2-inch PVC non-articulated figurines of Tim-Tom and Kevin! 8-inch scale figures sport real fabric clothing and a 1970s retro style that accurately portrays that distinctive action-comedy mix that has become synonymous with the TV series.

The almost unbelievable Death’s Head Panoply Battle Armor Monarch Action Figure presents the arch-villain in a fabric bodysuit with vinyl shorts and PVC gauntlets, chest armor, and boots. His amazing foldable wings are held in place by his jetpack. And note the crowned helmet!

Dr. Mrs. The Monarch wears her crown, too, and comes in a revealing (of course) black outfit with sheer, see-through fabric cape and fabric boot tops. What would The Monarch do without his sexy wife and partner?
Former Dr. Girlfriend Murderous Moppets Tim-Tom and Kevin are also included! Standing approximately 3 1/2-inches tall, the foulmouthed and psychotic dwarves appear wearing matching larva uniforms, just like in the show. These PVC figures feature no articulation and do not include fabric clothing. The tin tote approximately measures 8 5/8-inches wide x 6 3/4-inches tall x 4-inches deep. Grab your set today before it’s gone forever – just like the now sold out Rusty and Jonas Venture set! 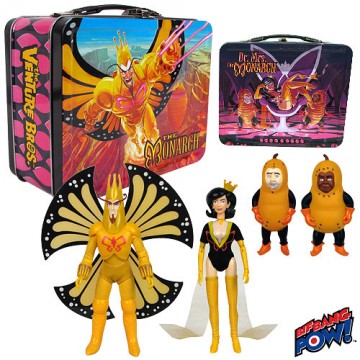