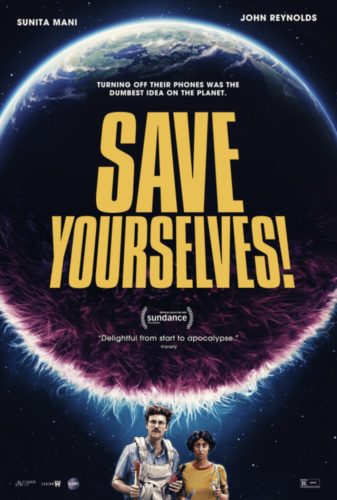 Hipster comedies shouldn’t exist, but when you have cosmic chemistry like John Reynolds and Sunita Mani, maybe it’s time to reevaluate. “Save Yourselves” is a cute, charming comedy about enjoying life and ignoring technology. 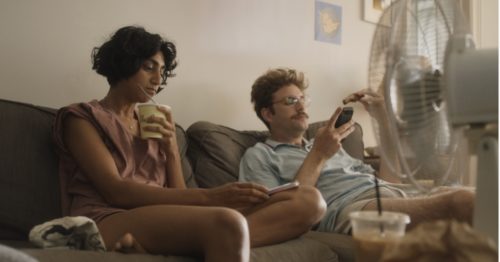 Brooklyn hipsters Jack (John Reynolds) and Su (Sunita Mani) are obsessed with technology as it constantly consumes every waking moment of their lives. Fearing technology is starting to detrimentally impact their relationship especially with the frequent mindless scrolling and searching all day, Jack & Su head to an isolated cabin in the woods, two hours away from Brooklyn, in Pine Bush, New York. For one week, no phones, laptops or checking email- Jack & Su are completely unplugging from the outside world. What’s the worst that could happen? It’s not like the planet is under attack…or aliens are invading, right? 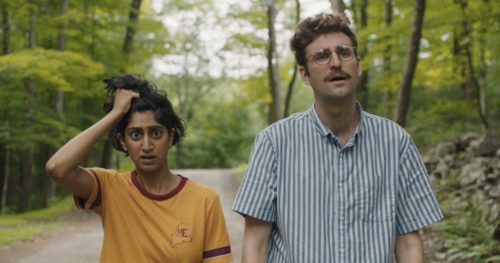 “Save Yourselves!” is the epitome of a summer gem! Thanks to fantastic casting and chemistry with its two leads, John Reynolds and Sunita Mani, “Save Yourselves!” is an unconventional charming comedy that somehow mixes rom-com with an apocalyptic twist while avoiding being a cliché. Writers and Directors Alex H. Fischer & Eleanor Wilson have crafted an amazing alien invasion with a stimulating sci-fi comedy combined with mumblecore for a must-see surprise. Fischer & Wilson have knocked it out of the park reminding me of another real-life couple’s feature film debut, Jonathan Dayton & Valerie Faris’ “Little Miss Sunshine.” I can’t wait to check out their next project. 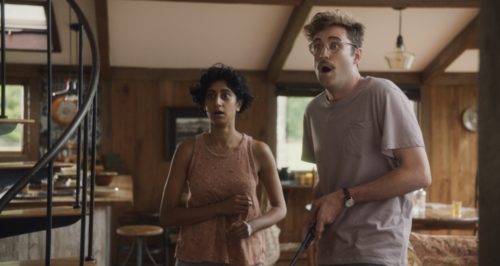 The quirkiness of Jack and Su are magnificently brought to life by John Reynolds (“Search Party” and “Four Weddings and a Funeral” miniseries) and Sunita Mani (“GLOW”). Their chemistry captures you right away and wonderfully portrays the quirkiness of a Brooklyn hipster couple. Reynolds’ remarkable role wins me over once again, much like his highly underrated performance in “Four Weddings and a Funeral.” There’s an undeniable quirky, magnetism about Reynolds and Sunita Mani equally hypnotizes you. Their beautiful bantering and bickering left me in stitches, especially with the line “You’ve replaced your phone with a notebook. You need to relax!” or when they’re arguing in a shower about body wash is just priceless. There’s plenty of delightful dialogue sprinkled throughout being brought to life by these two amazing actors. 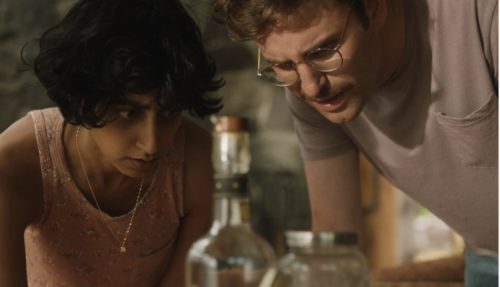 Despite the obvious alien invasion and terrible tropes about having to save the day, the filmmakers fantastically avoided predictability and executed a cool concept. The creatures in the film are an interesting cross of “Critters” meets those furball aliens from “Star Trek” while the film has a “Safety Not Guaranteed” tone and vibe. It’s a mysterious movie with wonderful, witty dialogue yet somehow comes across as a mumblecore movie meets classic sci-fi from the 1950s. Much like most mumblecore movies, viewers might not appreciate the attempts at social commentary or the minimalistic approach stating this is nothing more than a stereotypical “Sundance”/festival film. However, this is a goofy, quirky film viewers will enjoy if they want something unique and unexpected. John Reynolds and Sunita Mani make this “rom-com” something special to curl up and watch.

“Save Yourselves!” arrives in theaters October 2nd and will be available streaming starting October 6th.