I love cool events like this! Disney is opening the doors of it’s Burbank lot for a week only! You can see Saving Mr. Banks, Tour the sets, see the Walt Disney Lot, get a copy of Mary Poppins on DV and More!

One thing I love about living in Los Angeles are events like this.

DISNEY’S “SAVING MR. BANKS” COMES TO THE PLACE THAT STARTED IT ALL —THE WALT DISNEY STUDIOS IN BURBANK, CALIFORNIA—

FOR A SPECIAL LIMITED ENGAGEMENT DECEMBER 13 – 19

BURBANK, CALIF. (November 18, 2013)—Disney announced today that for one week only, guests will have the opportunity to see Disney’s upcoming “Saving Mr. Banks,” starring Emma Thompson and Tom Hanks, in a state-of-the-art movie theater on the Walt Disney Studios lot in Burbank, California, and then walk in Walt Disney’s footsteps on a special tour of the famous lot. This limited engagement features one show daily at 7 p.m. from December 13th through December 19th.

Tickets are $50 each and include a reserved seat to watch “Saving Mr. Banks” in the Studio Main Theatre as well as the “Walk in Walt’s Footsteps” tour immediately following the screening, which showcases key locations that were featured in the film. On the tour guests will have photo opportunities with Mickey Mouse as well as Mary Poppins and Bert the Chimney Sweep characters from “Mary Poppins” and will get a chance to see sets from the film, such as Walt Disney’s office and “Mary Poppins” author P.L. Travers’ home. Guests will also visit the Walt Disney Animation building, where they will get a sense of the art of animation and the history of the Walt Disney Company. Included in the tour is a visit to the Legends Plaza to see the statue of Walt Disney and view the many historical plaques, including Dick Van Dyke, Julie Andrews, and more. Guests will also receive a commemorative 50th Anniversary “Mary Poppins” DVD, a value of $17.99.

To purchase tickets to this limited and exclusive engagement, call 1 (800)DISNEY6 or go to http://movies.disney.com/saving-mr-banks and click on the link on the homepage. 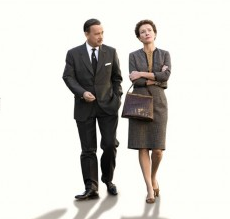