I got a call, there was panic on the other end, “My sister…” that’s all I could hear over the sad desperation. I thought for a second… Who is this? Then I realized… It’s Billy! No, he didn’t just see Chloe Bennett and forgot his 5×7 photo in the car, this time Billy was supposed to go to Paleyfest for the Sleepy Hollow panel and can’t make it down to Los Angeles.

Now, Billy really wanted something signed for his sister… A sister I’ve never met, and I’m not convinced exists. In fact, I’m under the assumption that she exists only in Billy’s mind to make it okay that he has tickets for the Vampire Diaries and Pretty Little Liars Paleyfest panels.

Still, I placate him. He is Billy Beer and crushing his delusions, while fun for a second, only mean I have to get early morning phone calls where he lists then entire schedule of events for the week asking if everyone will sign autographs. And who needs that madness from more than one person.

So, since I do enjoy Sleepy Hollow, I cancelled my plans, grabbed my SDCC Sleepy Hollow posters and headed out. I know… I’m a nice guy. A prince among men, a true champion… Oh, I’ll shut up now. In all seriousness, I’m happy to try and help Billy out even though I sort of failed.

But enough of my rambling. On to Sleepy Hollow!

I saw Suddenly Susan over the way and probably should have joined her as there were a lot of free seats in the house.

The panel started with the main cast and creators taking their seats. I was surprised to see Jon Cho here. I mean, his character after all is no longer on the series. 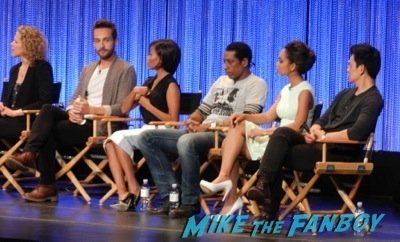 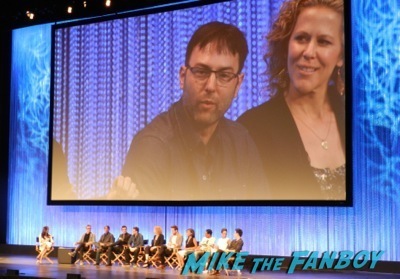 However as EP Mark Goffman said, “You can be dead but that doesn’t mean you’re gone.” Ah, that’s why I love me some Science Fiction!

Overall, it was a lively panel and both Orlando Jones and Ichabod himself, Tom Mison demonstrated their ease together on stage. Tom is so adorable, you just want to take him home with you. It’s always great to see a cast who clearly enjoy each others company. It really does make all the difference in the world. 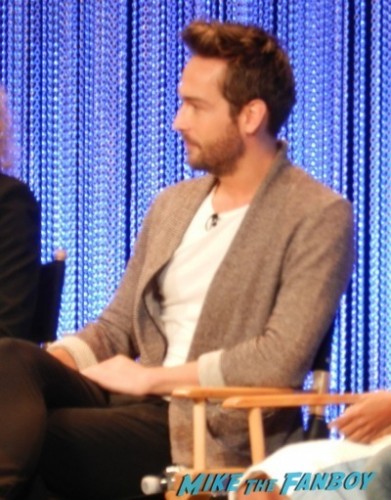 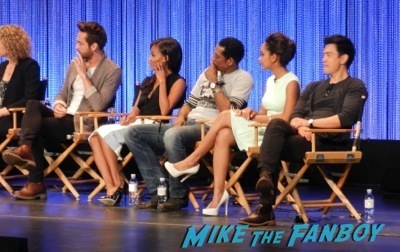 Some of the highlights of the panel include…

Alex Kurtzman talking about the search for Ichabod and him originally being written as American, saying, “but it quickly became clear we do not manufacture men in the United States.” Ouch! 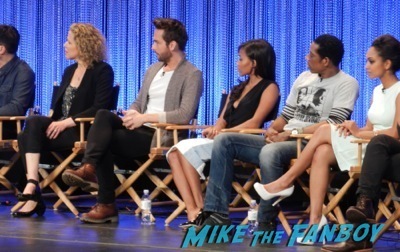 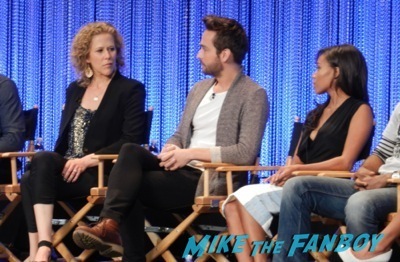 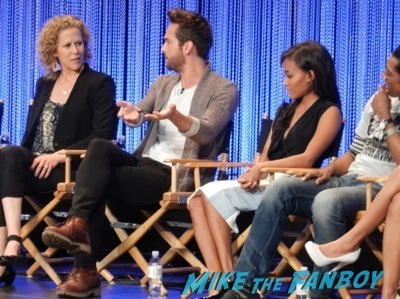 Len Wiseman saying that he knew they found their Ichabod when the women in the production office were fawning all over Tom Mison’s audition tape. 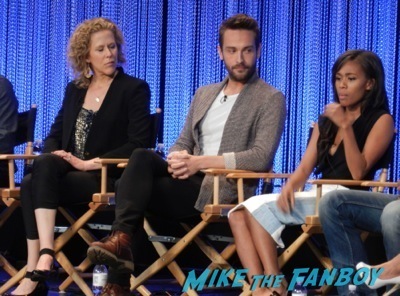 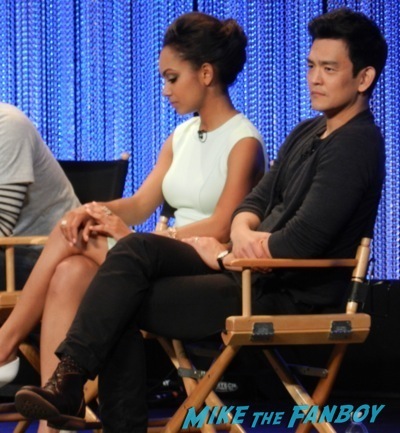 Tom Mison saying he has never heart of “shipping” but is a “good thing” apparently. To which Orlando Jones replied, “You should google slash just for fun.” I still don’t know what that is and I don’t want to! 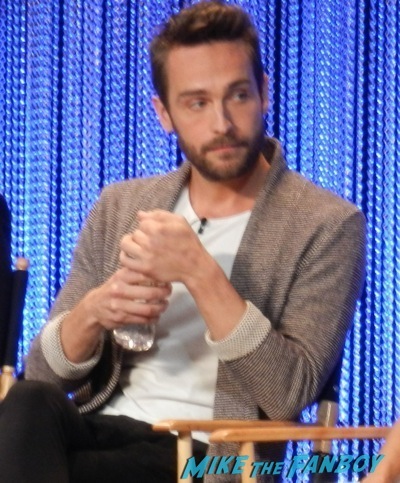 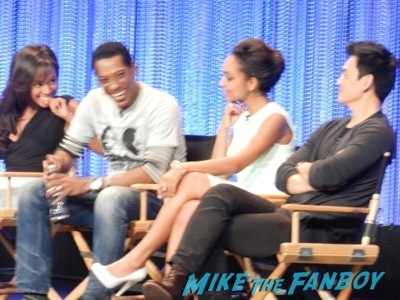 One audience member asked what show past or present would you like to crossover with. Answers included Supernatural (Jones) The Walking Dead (Mison who wanted Ichabod to start falling apart and chase Carl), and The Wire (Nicole Beharie). 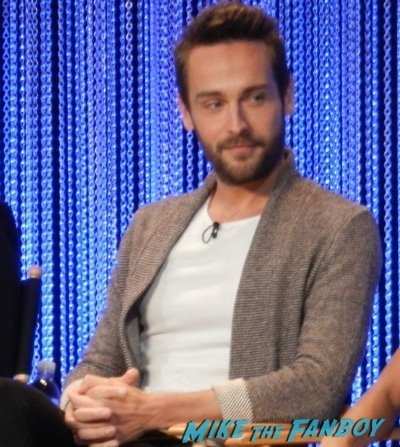 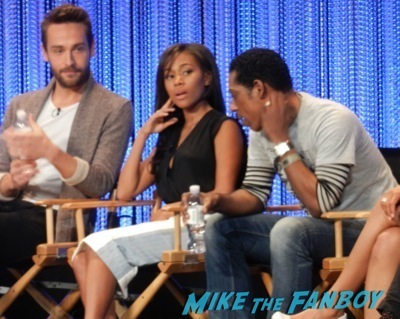 And who would some of the cast want to play the second horseman? Tilda Swinton? Okay… I think that’s awesome. There was a hint that someone on the panel could show up as well. 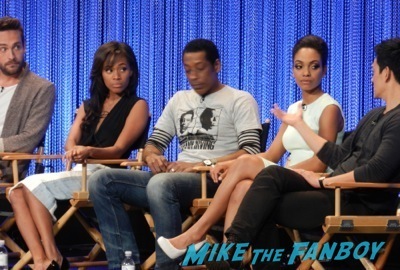 Tom Mison saying that he loves to get involved with projects that could crash and burn easily if not done right.

And John Noble will be back after his stunning turn on the second part of the season. He was awesome and I’m glad to see him especially after that finale! 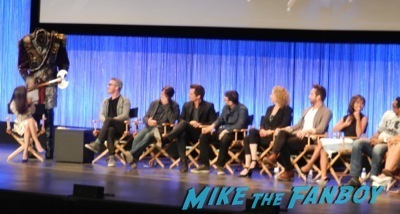 After the panel the usual mob scene occurred. I had two of the SDCC posters and was getting one for Billy’s imaginary sister. Nicole Beharie was super nice and trying to sign as much as possible. She signed one poster and then I asked her to sign the other one to Gail. And then Orlando Jones ran over and signed it as well. 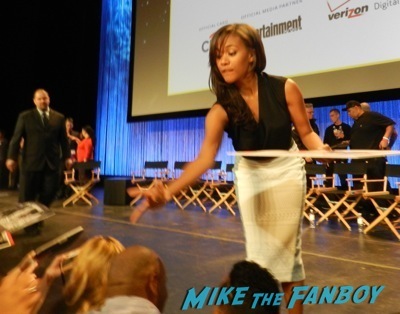 Tom Mison was trying to take as many pictures and sign as much as he could. He was actually laying on the stage to get photos with people. He signed my poster, but was very adamant that only one each. I respect people when they say that, so I didn’t even try for another. 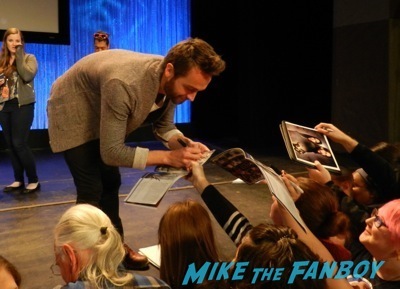 Lyndie Greenwood was signing her life away as well, and signed my poster, but then suddenly security was yanking everyone away. I’m like, really guys? The cast was cool with staying why are you rushing everyone off? I’ll never understand that!

I also say Bob Orci and quickly got him on my poster before he was ushered off. Man… That was crazy.

Overall, it was a fun night. I’m sorry I only got a couple people on Billy’s imaginary sisters poster, but it’s a good start right? 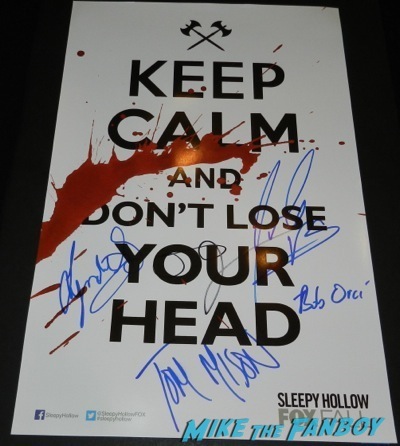 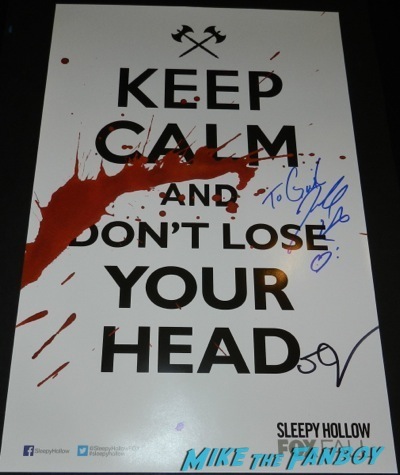