Home / Fanboying! / Spending The Night On The Cold Mean Streets Of Hollywood So I Can Meet Firefly Star Sean Maher! Autographs! Wiccans! Bubble Infants! And More!

You know there are just some people I like that just don’t seem to be around. It’s true. Not that there are celebrities just lounging around on the streets saying, “Hi, can I sign something for you?” But it always seems like there are one or two… Or in my case 90 people you just never see.

One such person is Sean Maher from Joss Whedon’s Firefly and of course the film version Serenity. Sean was performing in a play series called the Young Playwrights Festival which picks the best written one act plays from teenagers. All of the one act plays has one celebrity in the cast and they are rehearsed and performed within a week.

One of the coolest collector’s out there, my friend Liz and I headed out on the cold mean streets of Hollywood to try and meet Sean and perhaps get a poster or two signed… lol…

7:19 p.m. – I just arrived. Liz and I are trying to get people on the way in… But who knows. I’m walking over and I see a bag with a bunch of undergarments in it. After taking a second to ponder why a bag of undergarments is sitting on the streets of Hollywood, I can only imagine it’s for some poor undergarment deprived homeless person to go through and find a matching set. 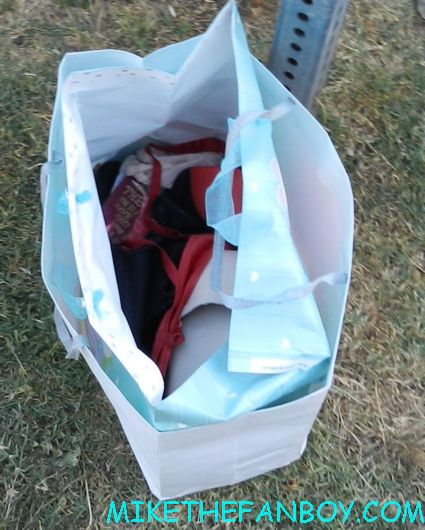 7:31 p.m. – I meet up with Liz, who looks adorable today. Just a side note. We are literally standing in the middle of Hollywood blvd. I have to tell you… It feels like Hollywood needs to be hosed down, like if Jesus could take a giant hose and just do a crapload of power washing. That’s what needs to happen.

7:46 p.m. – We are watching everyone walking in. Liz is spotting some Vampire Diaries stars. I have no idea who any of them are to be honest but Liz is very excited which makes me happy.

7:54 p.m. – No Sean. We have surmised that he must be in. Now, another option is that everyone is coming in right before their play starts. I haven’t eaten anything today but a peanut butter and jelly sandwich so I’m a tad hungry. Liz isn’t letting me eat though. She’s making me starve. Sadness…. 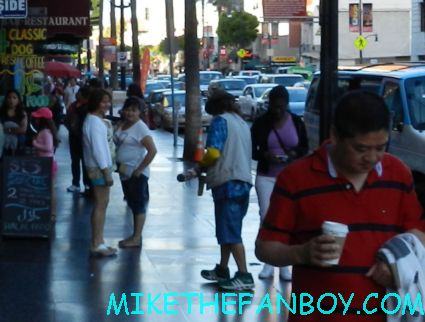 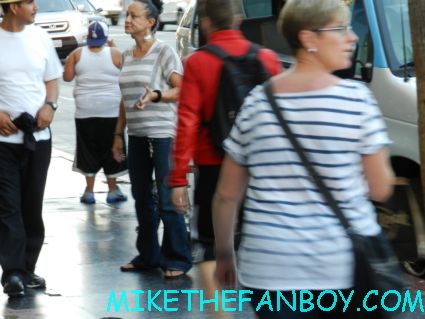 8:45 p.m. – There is a small kid/woman/person with a wife beater and rubber duckie boxer shorts. I’m just so confused. It looks like Webster got inflated. Just… wow… God bless Hollywood.. 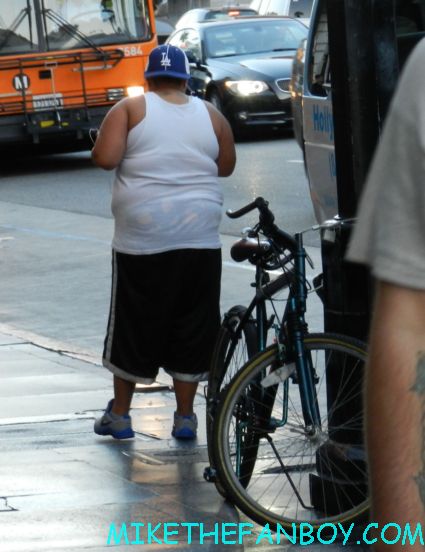 9:09 p.m. – The people… I just can’t get over it. Liz and I are standing here. Frankly I feel like an unwashed slightly overweight hooker and people are looking at me like I am one so… So… I guess that fits.

9:15 p.m. – I looked over and there are a group of women have some sort of seance on the middle of the blvd. I’m without words… To be honest.. No words… Why? First off the germs on Hollywood Blvd are like small woodland creatures and second why and who are they trying to contact? And why would any “celebrity” want to talk to a group of random women? So much is wrong with this picture. 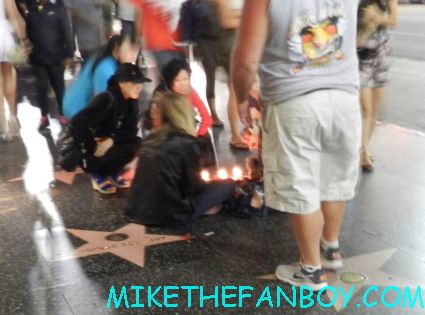 9:34 p.m. – Speaking of wrong with this picture a dude just walked by with a skin tight shirt and the shortest and tightest pair of flower shorts no one wants to see. I just want to know why? WHY! I’m by no means a fashion maven, but for God sakes there are mirrors in every household… Right? 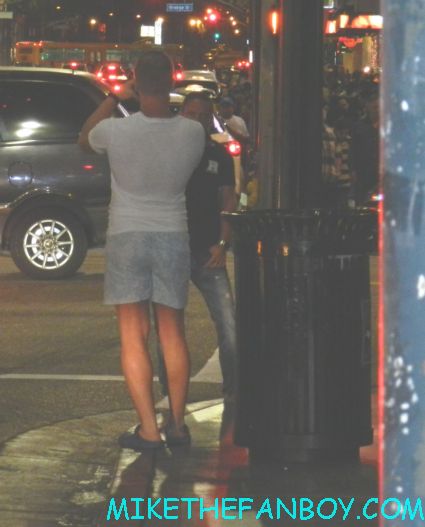 9:39 p.m. – Oh, Liz is freaking out… It’s a Vampire Diaries person! Actually it’s Matthew Davis from Legally Blonde which is what I know him from. Liz knows him from Vampire Diaries though. Matt is super nice and is happy to take photos with both of us. 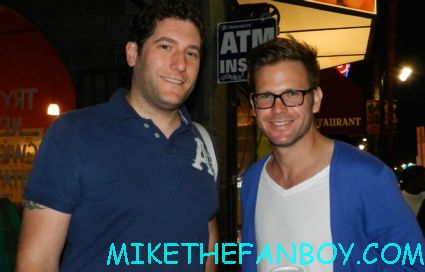 But Liz’s photo is super cute. 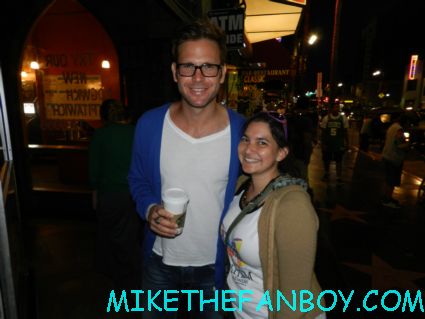 9:44 p.m. – I have to tell you, I’m so glad Liz is here with me. I probably would have cracked up by now. Between the random amateur wiccan’s, the severely misappropriately dressed tourists and what I’m calling just “the others” Hollywood on a friday night is a crazy place!

9:46 p.m. – You know what I forgot to bring today besides my Alias mini poster? My giant wood cross! Dammit what was I thinking? How does someone leave the house without their giant wood cross? I’m blaming Liz, she was supposed to remind me to bring the giant wood cross and dammit I didn’t get that reminder text! 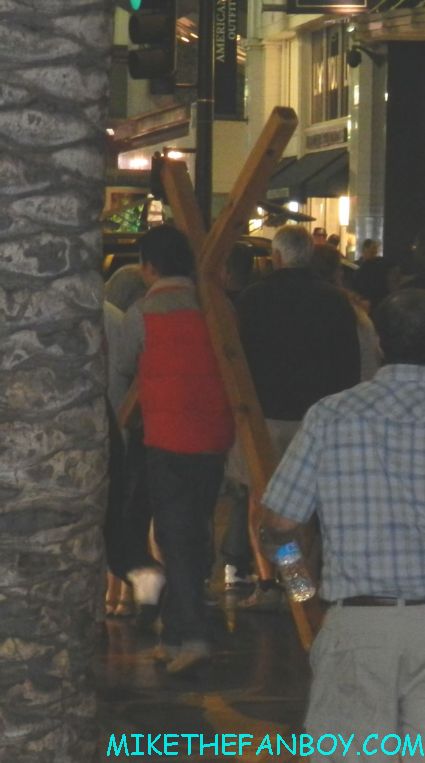 9:56 p.m. – Oh, now there’s a couple with a baby. They have put their baby in a stroller with what looks like a plastic bubble around it. It’s like the prequel to the Jake Gyllenhaal classic Bubble Boy. Sort of Bubble Baby. The tag line would be something like, “Sort of like Baby’s Day Out but this time… That baby’s in a bubble!” 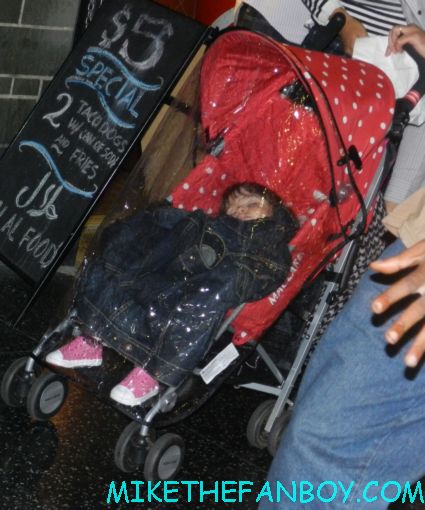 10:01 p.m. – Seriously, I think that the audience for this play is being held hostage inside. No one is leaving, why are people staying? Are they afraid of the crazy people on the streets of Hollywood? This reminds me of The Craft, when Fairuza Balk is getting off the bus with the rest of the witches and the bus driver says, “Be careful of those weirdo’s” and Fairuza Balk turns and says, “We are the weirdo’s mister.” It’s true… (of course I say this clutching my Serenity mini poster, it’s very dramatic in my head!)

10:08 p.m. – People are leaving! Thank Jesus! Liz spots Nina Dobrev and some other Vampire Diaries people. Again, I have no idea who they are lol… God love them.

10:21 p.m. – I think I just freaked out! Sean Maher is leaving and I may have squealed. I’m not sure. His hands are full of stuff and Liz and I are trying to catch his attention. We Sean would you mind signing for us? Sean Maher literally is so hyper frakkin nice! He’s like, “Oh my God!” He hands over all the stuff he’s carrying and is like, “I can’t believe that you guys were waiting!” I showed him my Serenity poster and he signs it and then I asked him to sign the second one and he was like, “Oh this shouldn’t be in black…” So, I’m searching for a silver as Sean signs Liz’s photo. Then a random kids walks up to me and says, “Do you like rap music?” I’m like what? A random kid is interrupting my Fanboying? Seriously? I’m freaking out man! I tell the kid no. He says, “do you like hip hop? I’m like no but if you have Kylie Minogue let me know! Sean then signs my poster and he even blows on it to make sure it doesn’t smear. 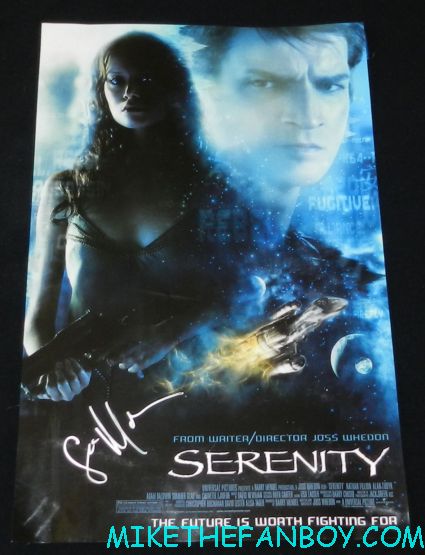 I then asked Sean Maher for a photo and he was like oh sure! 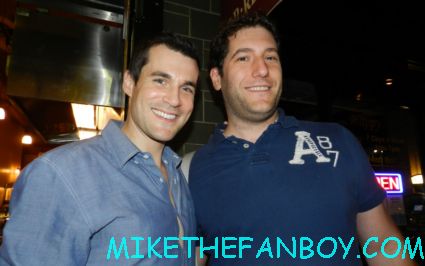 Then Liz wasn’t going to ask so I asked for her. And once again Liz’s photo is way cuter than mine. lol… 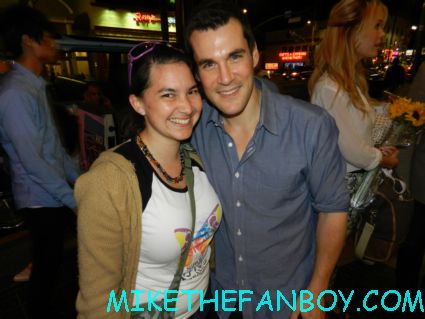 Sean then asked if we saw the show and Liz said she was going Sunday, and I said we didn’t want to bring posters in. Lol… Sean then says, “oh please wait and say hi again. You guys made my night! You have no idea!”

How nice was that. See it’s encounter’s like this that make me so excited. I mean I get that Firefly is a cult classic but still Sean could not have been nicer.

Such a fun night! And thanks to Liz for coming out with me so I wasn’t alone on the cold streets of Hollywood! 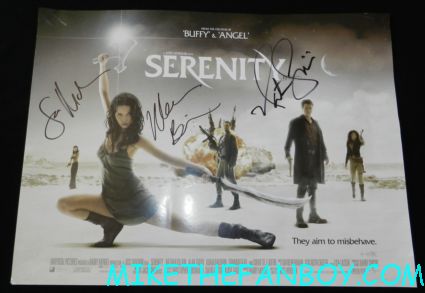