After a shocking episode two weeks ago, we return this week to see Wilkin Brattle well alive and in one piece. Assuming it’s his last day on earth, he throws a pity freebie at Jessamy as a “farewell” gift, but it backfires on him when Lady Love spares his life. Imagine living with your one night stand. I know, so awkwardly awful. Jessamy tries to get close to Wilkin, but he is back to his aloof ways. You have to feel bad for her when it comes to the point where she believes she was a disappointment in bed. Outch! Of course, Wilkin plays it nice, but Jessamy is quite mindful of his stance.

Wilkin and his gang pay their respects Calo and bury his body right outside the shire walls. Wilkin certainly feels completely responsible for his death. The charade took turns that he never expected. His brothers attempts to put his mind at ease; they are all in it together and the gruesome outcomes are heavy one each and every one of their shoulders. 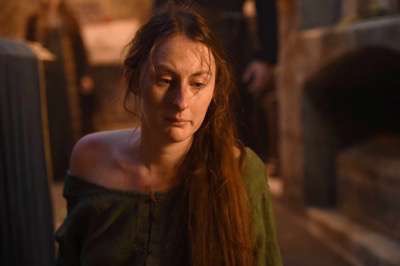 Meanwhile, things get a bit heated between our beloved besties, Lady Love and Isabel. Lady Love is slowly getting crushed under the building pressure. She has yet to come up with a plan to carry out her “pregnancy”. She needs to figure out a way to pop a baby by all means necessary. If not, she will have to resort to marrying Baron Pryce. Isabel prepares all the cushions needed to soften the blow from the King’s scrutinizing eyes. To make things worse, Isabel confronts Lady Love about Wilkin. She is more than unhappy about Isabel’s boldness. Lady Love excuses her from her chambers before losing her cool; she goes all Lindsay Lohan in a hotel room. Up to now, Lady Love has been able to carry herself quite well under whatever got thrown at her; however, Wilkin seems to be her Achilles heel.

Earl of Warwick visits Ventrishire to bring news of Piers Gaveston’s exile for leading the King astray. It seems like the bitter Frenchman is losing out on all ends. The frivolous King’s act of disregard to law and order has pushed shires dangerously close to utter chaos and war. They attempt to give the power to the parliament. Earl of Warwick travels to Ventrishire in hopes of gaining warriors for the fight in return for influence in parliament to protect Ventrishire. 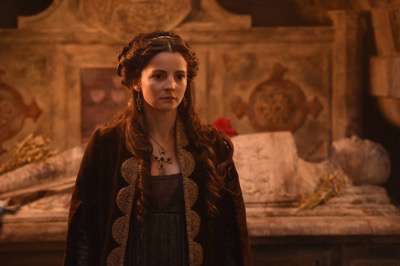 Even though Lady Love hesitates at first, she agrees to a deal after seeing the notice of Gaveston’s banishment. She takes it one step further by offering to capture him for a reward and favor; a favor which allows her the power to deal with the rebellion at her own accord. Milus and Lady Love are finally on the same page. He is quite impressed by her quick wit and negotiation skills.

Back at the caves, Father Ruskin continues to read the text Annora handed to him, The Book of Nazerian. He has more questions than ever. The text discredits the very essence of his faith. Annora enlightens him to the truth and explains the obvious reason for being hunted by the Archdeacon. She is meant to protect the text and its history. Confused by her transparency, Father Ruskin questions his purpose in all of this. Annora seeks the warrior within Father Ruskin. 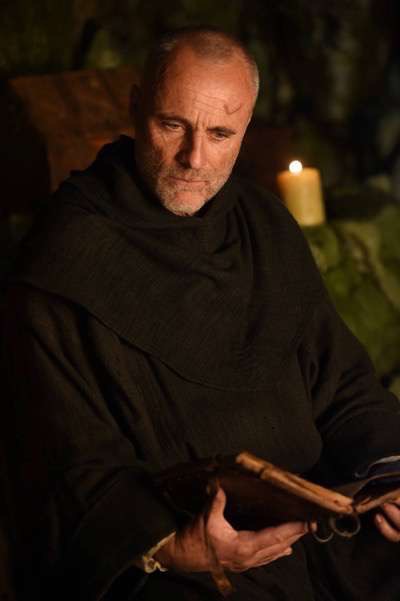 The Archdeacon’s men enter the cave to find it empty. It doesn’t take too long for all the booby traps to start snapping. Annora and Father Ruskin remain safe in a different cave next to the coast. She sends a message out to Wilkin through Father Ruskin. After losing most of his men, the Archdeacon sends his men after Father Ruskin and a possible young boy he might be mentoring.

Down in the dungeons, Wilkin teaches Luca how to read and write. Father Ruskin brings news of Annora to Wilkin and Toran. They head out, leaving Luca with Father Ruskin. Wilkin and Toran arrive at the cove. They see the Dark Mute’s melted face for the very first time. Annora take a stroll with Wilkin. He keeps questioning his faith, but her cryptic answers bring no peace to his troubled soul. Wilkin presses on to seek meaning to his entanglement with the Baroness. Annora advices him, “This feeling that grows with Lady Love will only come to light once there are no more secrets.” Maybe there is hope hidden deep within. 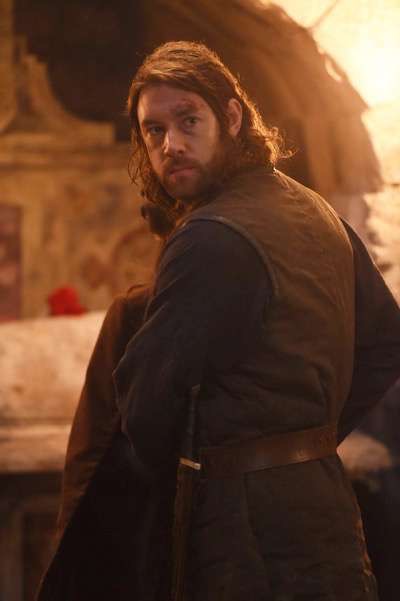 Annora gives Wilkin a glimpse from his earliest days; an infant let to die, but rescued by a nun and a soldier. Their peaceful heart to heart gets broken by nomads charging at them for revenge. The nomads don’t stand a chance against the three warriors. We finally get to see the Dark Mute in action; the medieval Quicksilver. His stellar skills with the sword surprises Toran and Wilkin. As if he took down all the men just with his prayer. 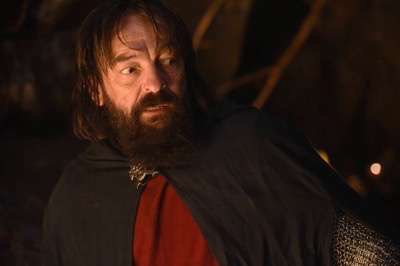 Milus learn about the twin’s true loyalty after the embarrassing debacle with Piers Gaveston. Now it’s his time for some bloody payback. He tricks the twins into believing that the Earl of Warwick already has information about Gaveston’s hide out and is on their way to murder him. The twins immediately prepare themselves to head out, but get caught and thrown in jail. Milus has his ways of picking which sister to torture; he uses his hands instead of his mind. In the absence of Wilkin and Toran, Milus forces Leon to carry out the punishment. After torturing one to death, he manages to get Gaveston’s hide out from the sisters. He is taking refuge in a monastery in Deddington. 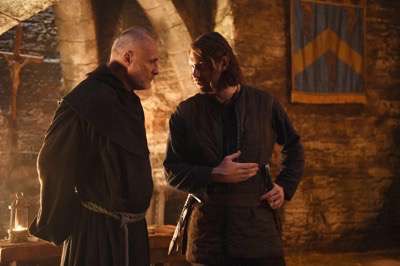 They prepare to head out to capture Gaveston. Milus insists including Wilkin and Toran to the search party, but Leon is not too thrilled with his decision. Before leaving for the hunt, Milus confronts Lady Love on her alone time spent with Wilkin. He actually offers Lady Love sound advice. She has been going up against all sorts of challenges and she has managed to hold her ground; nonetheless, it would be such a shame to lose all credit simply due to an avoidable scandal. 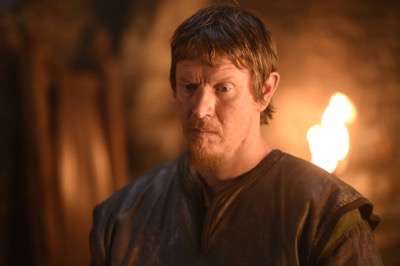 Wilkin and Toran returns to the bloody aftermath in the dungeon. Jessamy walks in with Luca inquiring about his absence. She is being nosey as ever. Her paranoia grows when Isabel arrives with a note from Lady Love. As a result of the attention they’ve been getting lately, their casual meetings now have to be secretive. Wilkin meets Lady Love down in the tombs. Since Wilkin spilled his beans last time, Lady Love comes clean to him. She reveals the true nature of her “pregnancy”. Safe to say she trusts him completely. Wilkin is certainly amused by her rouge, “You are aware that giving birth to a pillow neither serves the shire or yourself?”

All hell breaks loose when Jessamy walks in on them and go bat shit crazy. She charges at Lady Love, but Wilkin holds her back. Her dress rips open in the struggle; Wilkin and Lady Love sees all the scars from her abusive husband. Way to keep their meetings on the down low. Instead it turns into a medieval Jerry Springer showdown. Father Ruskin comes to their rescue with his “Irish tonic” to calm Jessamy down until the morning. 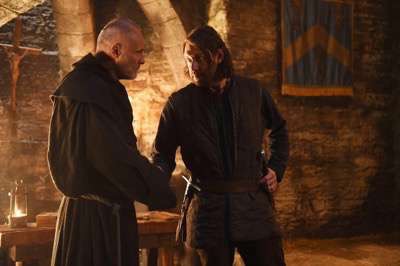 Milus, Wilkin and the Knights head out to hunt down Gaveston. Jessamy recovers inside the castle while Luca is taken cared by Father Ruskin. After bidding their goodbyes to the troops, they head back into their quarters only to get ambushed. Father Ruskin gets a good blow to the head while the Archdeacon’s men kidnap Luca. After having quite an explosive night, Wilkin still can’t catch a break. Everything continues to roll downhill.

I can’t even imagine what’ll happen on their mission, where Luca will wind up and Jessamy; oh Jessamy, you just never know what kind of hell she’ll raise once she comes to her senses.