I have to tell you I loved Wreck-It Ralph. It was a wonderful look back at the video games of our youth when simple computer graphics were a source of amazement.

Wreck-It Ralph is out now on Blu-Ray and I highly suggest you pick up a copy or five. Like Suddenly Susan wrote in her review of the film when it was in theaters it’s a pretty amazing film.

MTF Reviewer Scott took Wreck-It Ralph for a spin and loved it! Check out his full review after the jump!

When I think of Disney movies I generally think of either the classic hand drawn movies that I grew up with, or I think of the recent Pixar mega hits. Disney Animation hit it out of the ballpark right off the bat with Snow White and The Seven Dwarves. Then followed that movie with hit after hit both critically and financially: Pinnochio, Dumbo, Bambi, etc. Pixar’s story is a similar one: Toy Story, Bugs Life, Monster’s Inc. etc.. were also hits with critics and audiences alike. 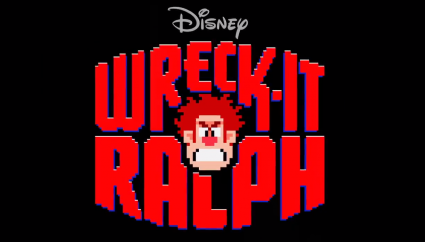 Disney’s trek into the Pixar world of computer animated family film hasn’t been as successful. Chicken Little, Meet The Robinson’s, and Bolt were all fine movies, but failed to connect with audiences and critics the way their counterpart Pixar films had. Then Disney hit gold with the perfect combination of ‘princess movie’ and ‘boy movie’ all rolled into the lovely package that was “Tangled”. “Tangled” started, what I hope to be, the next great era of classic non-Pixar Disney movies . They followed “Tangled” with the beautiful and heart breaking “Frankenweenie” which was nominated for best picture at the 2013 Academy Awards. Then came Ralph. 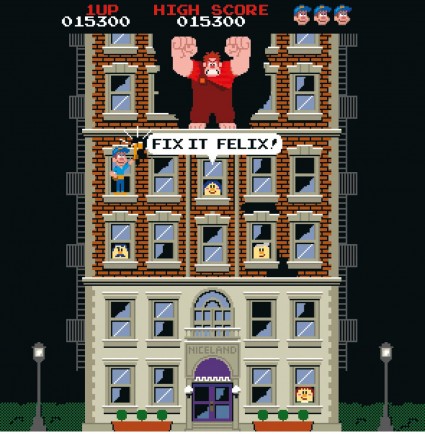 I slipped “Wreck-It Ralph” into the blu-ray player with low expectations. I had heard nothing but great things from friends and from reading reviews, but I was still weary. The video game craze has been a part of my life since grade school. I, however, was never part of it. I had an Atari in the late 80’s. I loved Frogger and PacMan as much as the next kid. I bought a Nintendo and spent my share of hours with Mario and Luigi, but gaming never became a big part of my life. It’s just not in my blood. This is why I didn’t expect to connect to Ralph. I’m the first to admit when I’m wrong, and I was very wrong. 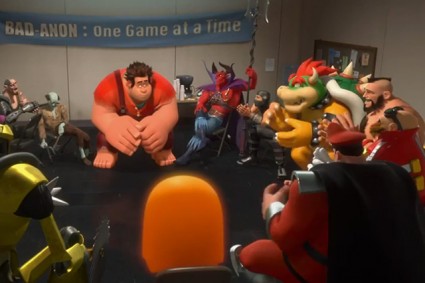 Ralph is an outsider. He exists within the game FIX-IT FELIX and in that world, he is the villain. Secretly, he longs to belong, to be a part of the family that exists within that game. At a party celebrating FIX-IT FELIX’s 30th anniversary, Ralph is told that he will be accepted into the ‘family’ if he can earn a metal. This becomes Ralph’s obsession and the catalyst for the story. 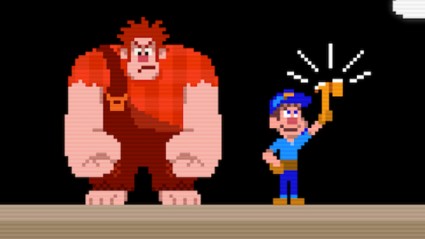 In Ralph’s world, characters can travel via transit, plugs, and outlets to a main hub and even into the world of other games. During a trip to said hub, Ralph discovers that gold metals can be won in the game HERO’S DUTY, a futuristic first person shooter game where the hero kills cyber bugs to win the gold. While in HERO’S DUTY, Ralph meets Sgt. Calhoun, voiced wonderfully by Jane Lynch, and wins the gold metal he so desperately wants. Unfortunately, the only way to escape the cyber bugs of HERO’S DUTY, is to steal a launch pod that catapults him out of HERO’S DUTY and into another game called SUGAR RUSH. In SUGAR RUSH he meets Vanellope von Schweetz, a glitchy character who takes Ralph’s medal and uses it to buy entry into a race. King Candy, King of SUGAR RUSH, and the other racers refuse to let Vanellope participate, claiming that she is not really part of the game. Ralph helps Vanellope build a real SUGAR RUSH race kart. At her home, Diet Cola Mountain, he discovers that she is a natural racer. 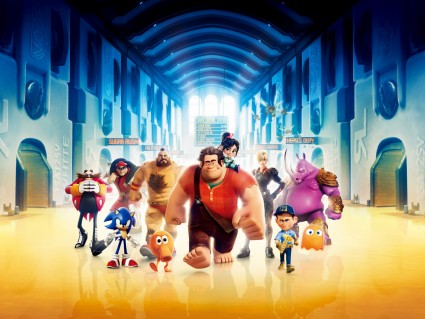 In the end Ralph helps Vanellope win the race, rediscover her true identity, and bring down the reign of the evil King Candy.

“Wreck-It Ralph” has everything that Disney does so well. It’s an entertaining story that is both creative and uplifting. It has characters you root for and want to see succeed. The 3-D is used in such a way that you feel you are part of whatever magical world Ralph has entered into. It’s the classic Disney tale of good vs. evil. 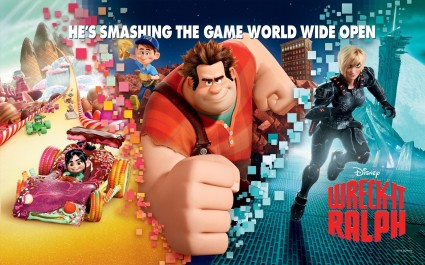 It’s a perfect movie that both boys and girls will connect with. It also has a nostalgic vibe that the kiddies parents will also enjoy.

I highly recommend picking up Wreck-It Ralph especially on blu-ray. The picture quality is absolutely superb and sparkles on the small screen. This is especially true in the world of SUGAR RUSH. The colors simply pop off of the screen.

The blu-ray is loaded with special features. The best one is The Gamer’s Guide to Wreck-It Ralph. When you pause the movie, self proclaimed nerd and gamer Chris Hardwicke pops on the screen and talks about some of the less obvious moments you might miss in the movie. Some are basic but others like hidden meanings in the graffiti and numbers are very cool.

Also, make sure and check out The Paperman short. It’s a great love story that is told without words and is divine.

In short… But Wreck-It Ralph today because it’s damn awesome! 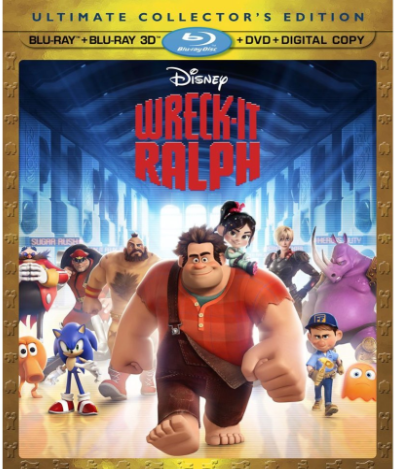