I’ve never been that big of an animation fan, I mean I love me some Little Mermaid and Finding Nemo but on the average I don’t go out of my way to look for animation to check out. However, I keep hearing amazing things about Walt Disney’s Wreck It Ralph!

For this edition of Seen It! Suddenly Susan falls in love with the animated villain who wants to be a hero. Awwww… I wonder if that would work for Skelletor? Or Cobra Commander? Just curious.
Check out Suddenly Susan’s review after the jump!

In a word – Crafty

Wreck it Ralph is the name of a fictional 1980’s video arcade game. Unlike so many games to have come and gone, Wreck it Ralph has lasted for 30 years. The title character is the ironically likable game’s villain who dreams of becoming a hero. His desire is so strong, that he rebels against his predetermined lot in life and abandons his game. Traveling between other video games in the arcade, Ralph (voiced by John C. Reilly) searches for what he believes will make his fellow game characters finally respect and appreciate him – a medal. Along the way, he meets another loner, a “glitch” in a racing game called Sugarland named Vanellope von Schweetz (voiced by stand out Sarah Silverman).

These kindred spirits form a unique bond and friendship as they try to help one another find their rightful place in their respective video game worlds. The pair eventually must eliminate a dire threat, that Ralph may have inadvertently started, with the potential to destroy the “lives” in the entire arcade. Ultimately, Ralph will learn what it really means to be the good guy.

The world created in the Wreck it Ralph is so fascinating, that I wondered what other creative tales lay within it. If you’re over the age of 30, it’s impossible not to feel nostalgic watching this film. There are plenty of fun references to keep the adults giddy with amusement, as well as laughs for the little ones. There’s a comic genius to it all, especially to Heroes Duty’s Calhoun (voiced by Jane Lynch) who has the “most tragic back-story” of all time. 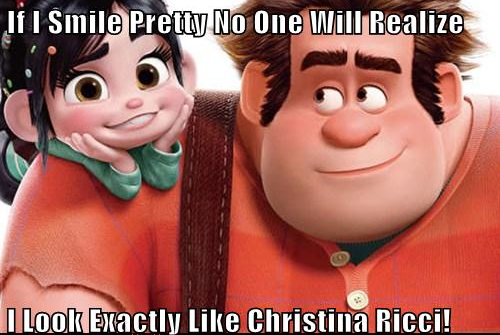 Wreck it Ralph is clever, colourful, funny, and touching with a lot more to offer than just cameos by Q*bert and Pac-Man. The emotional kick never overwhelms, but does deliver some genuinely moving scenes. There’s an undeniable humanity to our animated heroes, Ralph and Vanellope. The heart of the film is rooted in their yearning to feel like they truly belong, that they matter, that they have purpose. After all, isn’t that what all us real human beings desire?