I love me some David Boreanaz. Love him! Buffy! Angel! Bones, etc… So when Billy heard about the Bones 200th episode party, for sure he would have called me and let me know. I mean, it’s someone from Buffy! Why wouldn’t Mike get a call…

I’ll remember this when Billy whines that, “No one tells me about q and a’s” MMMMMMMMhhhhhhhhhhmmmmmmmm.

Check out his recap from the Bones 200th episode party below!

Welcome back to Billy Beer’s Barstool. Today we are off to celebrate the 200th episode of Bones. One thing that has eluded me for years is a picture with Emily. I was already in town for another event when and a friend had told me about this event. Everyone from Bones was supposed to be there to celebrate except David. If David was going to be there, I would have for sure called Mike the Fanboy, cause he’s a HUGE Buffy fan.

Parking is of course impossible to find in Hollywood. When I finally do find a spot, it’s so far away I had to run to hopefully get there in time. It was about 15 minutes past when they were supposed to start arriving. When I finally arrive, there are only 4 people there. This could go a lot easier than I thought. Nobody had arrived yet.

After about another 15 minutes we finally get our first drop. It wasn’t a main character, but we still called for her. She tells us she’ll do it on the way out, and acted like she was in a hurry to get to the carpet. She was the first one there. I don’t know what the big hurry is?

Next the creator of the show arrives. We call for him too, and after thinking about it, he makes his way to us. It’s only like a 10 foot walk. He signs a friend’s poster, and was on his way.

Emily is the next to arrive. Now I had just heard that she was pregnant again, so I was a little worried she might not some over. But she gladly comes over, signs something for everyone (I had an 8×10 that was in my car) and then takes pictures with all of us. YAY! After horrible failed attempts at Comic Con and an Always Sunny premiere, I finally got my photo-op. 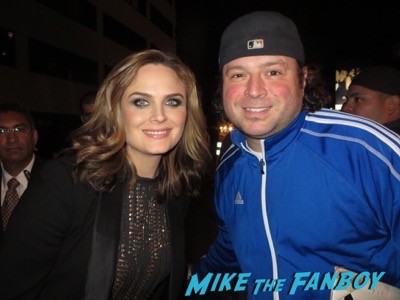 The next 2 cars were filled with people. I guess all the people that play the interns drove together. We call for them, and they all come over all at once. Instead of taking forever by taking individual pictures, we all ended up getting group photos. They were all in very good moods! 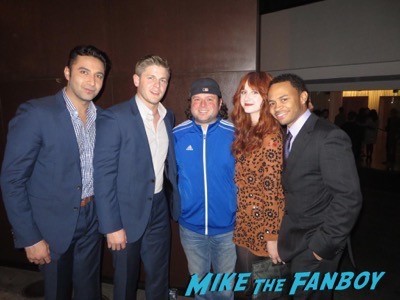 Well, that’s it. No David. I glad he didn’t show up, cause if he had, and I wasn’t able to tell Mike about it, he would have been a little upset. Although I’m sure he would have gotten over it very quickly cause he would have realized he saved himself from acting like a bumbling fool around David. 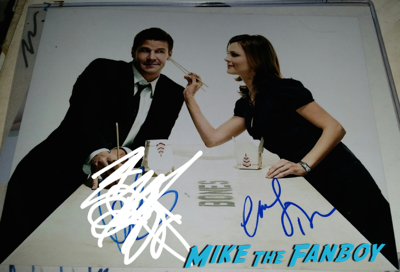