Now, if I wasn’t sick and choking on my own phlegm I probably would have made the trek back to Wondercon. If nothing else to see the Prometheus trailer and get the nifty poster. But thanks to The Lovely Erica I don’t have to troll eBay for one.

Needless to say, our own Strumpet went off and enjoyed a day at Wondercon. While I found the experience on Friday highly underwhelming The Strumpet had a nice Saturday!

Check out her Wondercon 2012 report after the jump!

I don’t know how this compares to past WonderCons, I know it’s run by the same people as Comic Con and that’s pretty obvious, but there’s no comparison. Anyway, after the hour long ordeal of trying to park I was ready to get my Con on.

First off is the badge pick-up line. Quick. I mean uber quick and that was a little shocking. I should mention that there was a Cheerleading competition happening at the same time and I believe some other sporting event. With the cheerleaders it was hard to tell if someone was in costume or if they were an actual cheerleader…if they snarled or looked baffled by other costumes I knew actual cheerleader. Like they had room to judge…I’m just saying.

Then came the next important thing on my agenda…COFFEE! I had been up since 7am and it was pushing 11am….4 hours, no coffee. I don’t know how I functioned. With coffee (oh sweet life giving substance) in hand I went to my first panel: 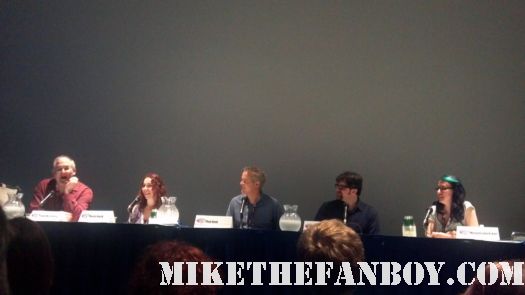 I love the thought of alternate history, that’s generally what Sci-Fi/Fantasy is all about. I love to hear authors describe their process. I also love author anecdotes. I think the best was Ernest talking about the audio tapes he found of himself with friends in the 80’s that they made while playing Dungeons & Dragons. Hey if they helped him write about future geeks who are nostalgic for the 80’s more power to him. So after some more about their writing styles, more anecdotes, and audience questions which are always painful, I headed to my next panel room.

The dreaded Ballroom where the film panels are held which I generally avoid, but I really wanted to see two previews: Abraham Lincoln Vampire Hunter and Snow White and the Huntsman.

Fox Screening: I took up residence about mid way in near the large screen set up for people sitting in the back. I could’ve moved forward, but there weren’t any people listed to be presenting so I didn’t feel like fighting the crowds. I have learned my lesson  I was there a little early, so after grabbing my nifty “3D” style poster for ALVH and Prometheus I watched a trailer from Fox Searchlight about an indie movie called The Sound of My Voice. It looked pretty cool. We heard the writers (1 is the director and 1 is the star) speak about it. You can go to the movies website and watch the first 12 minutes to get a sort of taste, but simply put it’s about a cult who believes this woman is from 2054 and is a time traveler. There’s a secret handshake and she has an anchor tattoo, but more on this later. That ended and then…Abraham Lincoln Vampire Hunter!!!!!

The moderator was Seth Grahame-Smith who also wrote Pride and Prejudice and Zombies and the panel was director Timur Bekmambetov (Wanted) and the man who plays Abe, Ben Walker (who looked like Colin Firth and Edward Cullen’s love child). I knew we were in for a treat because a) Wanted is a brilliant movie and b) Tim Burton produced (his video intro was just bizarre, but that’s Burton). So they showed us a little clip, and just like “Wanted” I had uncontrollable fits of giggles throughout the whole thing. OMW IT WAS AMAZING! Oh, over the top special effects, decapitated vampires, at rain sequence with a burning bridge, Abe slinging around an axe that became a gun that became an axe….and Rufus Sewell as the main vampire baddie!!!!! I CAN’T WAIT!!!!! All that was missing was a bent bullet but I hold out hope. Best line said on the way to Gettysburg via train (I’m going to butcher it) “In 80 miles we’ll know if the country belongs to the living or the Undead” AMAZING!

Then came Prometheus – and this is what happens when the Strumpet doesn’t do her homework – she doesn’t realize it’s Sir Ridley Scott’s return to Sci-Fi. She doesn’t realize that Charlize Theron and Michael Fassbender are two of the cast members, so she isn’t sitting near enough to the stage to get all three of their pictures when they come out for the panel! Bad Strumpet, bad. I can’t even begin to describe how awesome this movie looks…I don’t even know what I saw even though we watched the trailer twice…it was that phenomenal. Something about alien life and I think Fassbender is a robot. Go look this up right now. I mean it go find it and watch the trailer over and over. 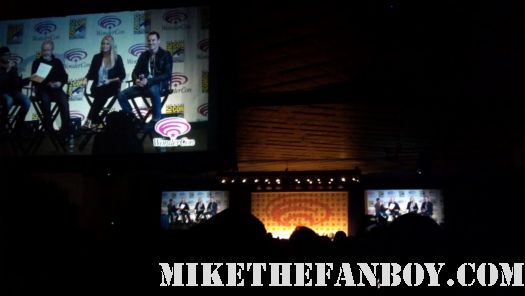 So then I moved a little closer for the Universal panels. First up, Snow White and the Huntsman with director Rupert Sanders, Charlize again and Kristen Stewart. Can I just say that Charlize Theron is disgustingly gorgeous…poor Kristen…it’s like watching a little yipping dog next to a Unicorn, and I kind of like KStew (I know, I know). It was painful to see them sitting side by side…I get the feeling there is no love for the Kristen from the Charlize. Ouch. Well Charlize did say that like Picasso had his Blue Period, this is her Bitch Period. We saw a long montage of moments from the film, like a long trailer. It’s going to be painful, and I can’t wait! 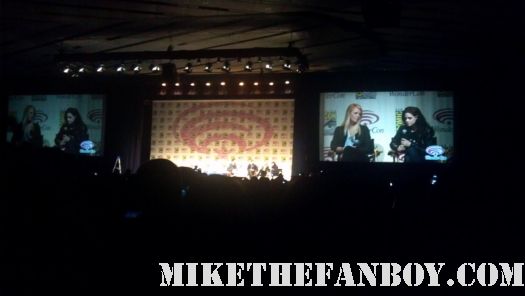 Then came Battleship. I think it broke my brain. 20 minutes of my life I will never have back and I left early. **shudder**

I finally got down to the exhibit hall and it was pretty standard. Mostly comics and gear for sell. I almost went to town at a Steampunk booth because they had some good starter pieces for cheap, but I refrained. I did buy a couple of comics (Steampunk themed) and a book from an author who was there (so keep a look out for that review). And I stopped by the booth for The Sound of My Voice and learned the secret handshake, got my anchor tattoo and am now a member of the cult. Oh, and I got my head put on a pike at HBO’s booth to promote Season 2 of “The Game of Thrones”. 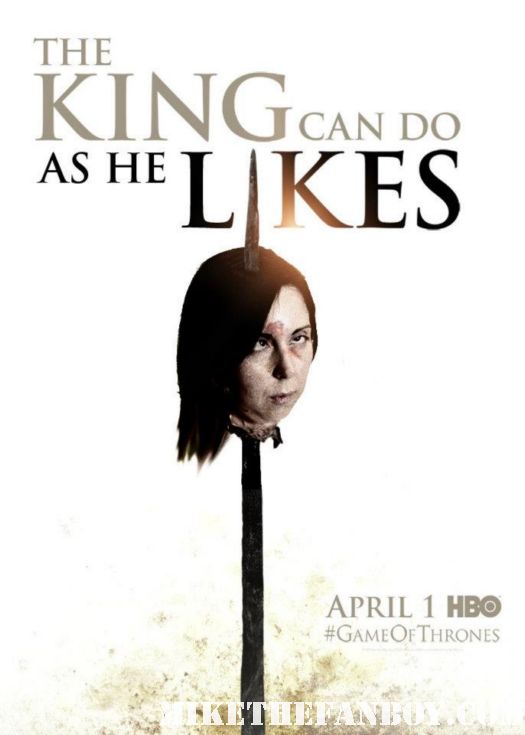 So, is it as amazing as Comic Con? No, but I guess when you have to move your operations hundreds of miles south and not everyone goes with you, not a lot can be done. I did have a great day, until Battleship sank my intellect, and think it was a good way to spend a Saturday afternoon…which now that I think about it was St. Patrick’s Day and I wasn’t wearing green. No one pinched me!!!! Now I feel unloved.