I love the Novel Strumpet! She is so rocking… I’m telling you! Today the resident MTF Strumpet is taking the Astonishing X-Men Dangerous DVD a spin!

It’s all kinds of Joss Whedon goodness! And as you all know I love me some Joss Whedon! Swoon… Buffy, The Avengers, Serenity… Sigh… It’s all good times!

Check out the Strumpets review of Astonishing X-Men Dangerous after the jump!

So Mike put the call out to review the new X-Men DVD from Shout!Factory in association w/Marvel Knights Animation based on a story by Joss Whedon and animation by John Cassaday and I said “Eh, why not?” Like how I got all that in there?

I admit, I’ve sparingly read the X-Men but was a huge fan of the animated series years ago, and I like to go online and look up the universe from time to time. I really enjoyed the first movie, and like the concept of their universe overall. Here’s what I’ve noticed… no matter how many “reboots” the series gets it’s like a freakin’ soap opera, it only takes me 2 minutes to catch on to everything that’s happening. That and Cyclops is still a whiny bitch.

I was interested to see what Joss Whedon would do, I mean some characters…like oh, I don’t know, Wolverine…lend themselves very well to the Joss Whedon style of snappy comments and seemingly witty repartee. Sometimes Joss gets it right and I laugh at the brilliance, sometimes I wanna punch people, it’s a very delicate formula. And when did Kitty Pryde become Buffy in an X-Men universe? She’s really annoying in this, in a “I’d like Colossus to slap her while armored” way.

So, this DVD…well first off it’s not really animation as it is comic panels moving. Like a really advanced art school project. In some ways cool because it really is like a comic book come to life, but the mouth thing is always creepy. Kind of like those talking babies from E*Trade, but that’s a personal issue. It did take me about 5 minutes to get used to it, but after that it was fine.

The whole thing is based on the Joss Whedon Astonishing X-Men comics and the reveal of “Danger”, so if you’ve read them you know the story. If not, let’s just say the Game Room finally gets its due after Cerebro has taken all the glory for so many years. Thumbs up to the darker side of Professor X, thumbs down to the fact that Cyclops still lives. And what is with Emma Frost? Geez woman pick a side!

Ok, you want a summary of the plot, fine…so demanding. The main thrust is that Wing, who has lost all mutant power, is feeling sorry and dejected and is contemplating ending it all (of course he is). He’s “encouraged” to his end and his suicide, or murder since you don’t know if he jumped or was pushed, causes some really strange things to start happening around the school. Suddenly all psychics are knocked out, all communication goes down and a Sentinel crawls its way on school grounds looking for its “god”. Here’s where I applaud the bad guy because I’m evil and would think this way…Whiny asks Buffy wannabe to take all the students into the Game Room (because if I want to protect kids I’d herd them all into a room built for combat exercises….good thinking dumba**) and three guesses where the bad guy has put their evil plan in motion. So, now the students are trapped in a room that is trying to kill them because that is its purpose. Brilliant! From there it goes into all this cerebral stuff about what is a sentient being and what constitutes a “god”, etc. Didn’t really care about that, I just enjoyed watching the X-Men get the crap kicked out of them. Thumbs up!!!!

The battles are fun, but the ending is waaaaaaay to easy and we don’t even get to see it really happen, we just hear about why it worked. Lame. Oh and it ends on a cliff hanger, I know, I know, shocking right?

I’d say if you are a die hard X-Men fan you’ll probably see this, just because you’re a die hard and have to. It’s pretty typical X-Men animation fair, so I was entertained but I’m not going to rush out and start reading them again. 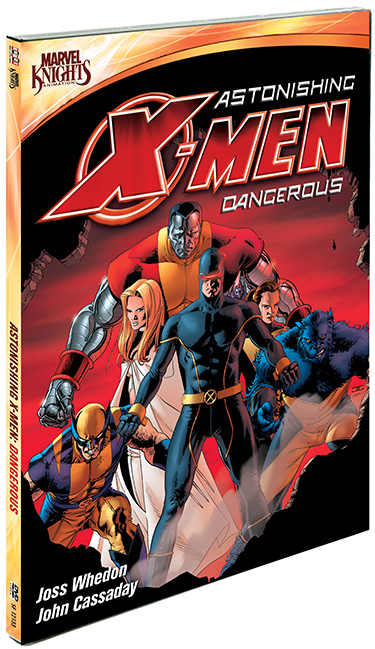