When thinking about animated movies today immediately my mind goes to talking toys, lost fish, jumping panda bears, and with all the current previews red headed Scottish girls defying their fathers. So, it’s always a pleasure to find a small film that has a big heart.

Based on the 1952 novel the Borrowers, The Secret World of Arrietty tells the tale of Arrietty, a miniature girl and her family who live in the countryside. When a boy comes to the home because he is ill, he discovers Arrietty and they strike up an unlikely friendship.

The tale is simple and the first thing I noted was, “wow, this doesn’t seem like a commercial for kids toys!” Gosh, that’s pretty sad huh? It’s refreshing to be honest, when a studio doesn’t pump out product to sell plastic crap to kids. Well, we are talking about Hayao Miyazaki here and not Hanna Barbera. No, I’m not bagging on Scooby Doo! LOL… However, Hayao Miyazaki does elevate the proceedings.

The animation is superb and I have to tell you watching animated films on Blu Ray is nothing short of spectacular. The visuals become even more crisp and clear. The Secret World of Arrietty makes you remember how wonderful it is to watch hand drawn animation.

The voice cast is perfectly cast with the slight exception of Carol Burnett. I found her to be slightly over the top in comparison to the rest of the voice cast. It was almost too obvious to have her in the production.

Still, with that being the only flaw, you can’t pass up The Secret World Of Arrietty, especially if you are a fan of Hayao Miyazaki or animation in general.

The special features include the original Japanese storyboards which are provided as an alternative way to watch the film, and a pair of music videos. There are some making of docs about the music videos as well. It would have been nice to have had more special features on the actual movie, however when the movie is this good it stands on it’s own two feet.

The Secret World of Arrietty is out now on DVD and Blu Ray. Go pick up a copy or 12! 😉 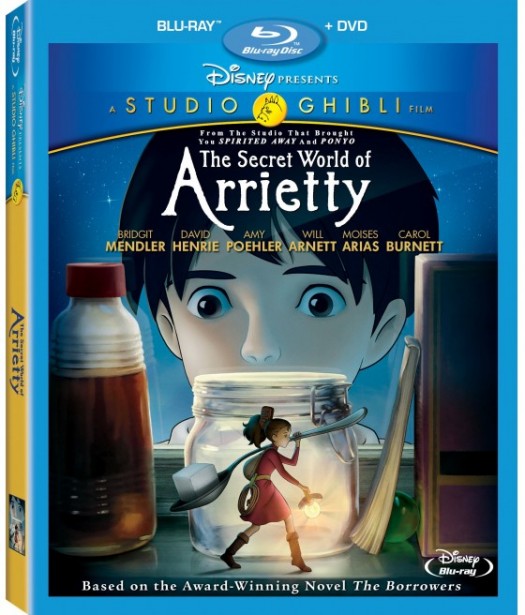