Home / Reviews / The Sting Review! The movie is one of the best con movies ever made!

Heist and con movies are some of the most popular genres with fans, and have given us some of the greatest movies ever. In that regard, the 1974 movie The Sting is probably one of the best of the genre, and indeed one of the best movies of all time. It was directed by George Roy Hill, who is most famous for the western flick Butch Cassidy and the Sundance Kid. Hill took his lead pair from that movie, Paul Newman and Robert Redford, and cast them in The Sting as well. 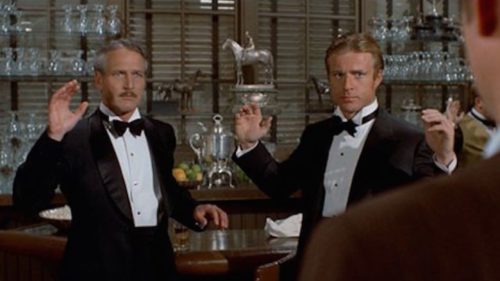 The Sting is based on the real-life exploits of con artists and brothers Fred and Charley Gondorff in the 1930s, with Redford and Newman’s characters in the movies trying to pull off a complicated plot to con a mob boss, played by Robert Shaw. It was a huge critical and commercial success upon release, grossing nearly $160 million on a $5.6 million budget, while it was also nominated for ten awards at the 46th Academy Awards, winning seven, including Best Picture, Best Director, Best Film Editing and Best Writing (Original Screenplay).

This should be enough for even a casual movie fan to be able to gauge just how good a movie this was. The film is memorable for its use of title cards during its runtime as well, which denote the various sections of the plot, while the title of the movie refers to the moment during a con when the con artist finishes his plan and manages to take the victim’s money. If he is successful, the victim will realise that he has been cheated only a long time later, if indeed he does realise it at all, by when the con artist will have disappeared. This style of storytelling has been seen quite a few times in various heist and con movies, and it can be argued that The Sting is one of the best examples of it. Heist movies were actually quite a popular movie theme during the 1960s in particular, with quite a few of them having plots based around plans to rob a high roller casino, for example, or fool some rich businessman or the other. It is notable though that very few of these have reached blockbuster status and won major awards – in fact that is rare for movies in general, with the Oscar award winners each year usually not being the big-ticket Hollywood blockbusters, but rather smaller ventures, even though the nominees always do see a surge of interest in terms of viewing when they are announced. Thus, The Sting is definitely a unique movie in that regard, which automatically makes it one of the greatest movies in American film history. 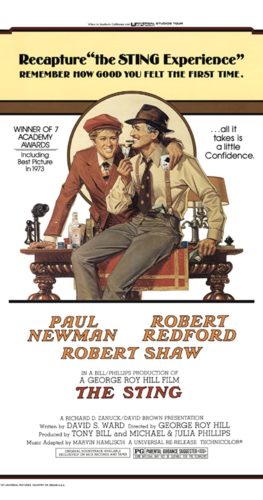 Another iconic part of this movie is the use of ragtime as the background score. For non-music fans, ragtime is a genre of music which was largely popular between the 1890s and 1920s, and so for it to be used more than 70 years later made it quite anachronistic, but also added to the movie’s appeal. Marvin Hamlisch’s work on the music, to adapt Scott Joplin’s music and use it, has made it one of the most identifiable and iconic movie soundtracks of all time.

The plot itself is extremely entertaining, even today, nearly 50 years after the movie’s release, while in the true spirit of a con movie, there are enough twists in the plot to leave the audience guessing as well, with a very satisfying albeit unexpected ending to wrap things up. Redford and Newman resume their excellent on-screen partnership, while Shaw is also extremely watchable as the antagonist/victim of the duo’s shenanigans. It is surprising that Hill is not acclaimed more in Hollywood circles, having directed this along with Butch Cassidy, two classics of American cinema which are still a great watch today.