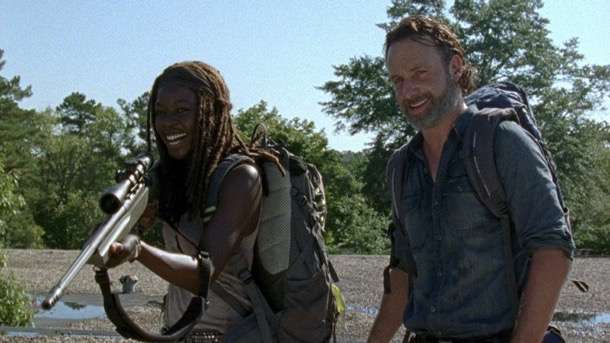 I really love this show and I know not EVERY episode can’t be a winner but sometimes you wish they could find a way to move the story along without the expense of an entire hour. Yes, character building is very important with a cast this large but it’s such a bummer when you look forward to Sunday night and then the night fizzles like a flat soda. 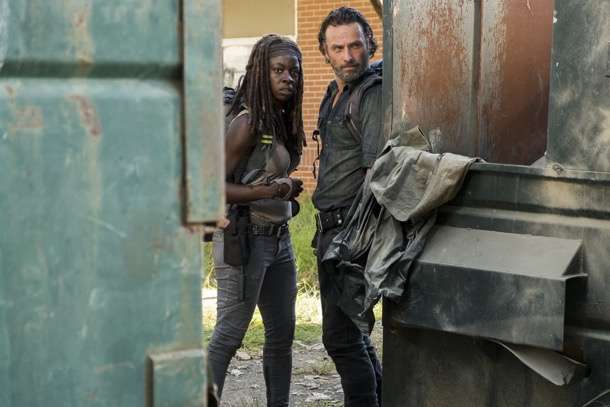 In any event let’s jump spent right in to what I call “Fun with Rick and Mich” as our favorite zombie apocalypse couple (apologies to Glenn and Maggie) are out on a quest to find guns for the Scavengers so they’ll join the fight against Negan (Jeffrey Dean Morgan). They are shown hoping from place to place, scavenging, and having tons of sex all the while not having any luck with the guns. But the difference is they are smiling and happy and that’s something we don’t see on either of these two’s faces EVER. Just when they are thinking of heading back they come upon a carnival that is still enclosed and packed with “Walkers.” Many of them are military soldiers (somehow still wearing their rifles) and there are bullet casings all over the grounds so we are led to assume there was a big battle here. Next to that is a building, which after they fall through the eroded ceiling discover is stored up with pallets of canned goods and military food rations (Chili Mac N’ Cheese for the win). So now they just have to kill all the remaining walkers so they can recover all the guns scattered about and they will have achieved their goal. With two of the best fighters in this universe you think this would’ve gone smoother but they had to find a way to insert some drama into this episode. While Rick (Andrew Lincoln) and Michonne (Danai Gurira) spilt up to take out separate halves of the walkers Rick gets this dumb fascination with a deer he sees and tries to go after it but all he does is fall and stumble making himself vulnerable to the walkers. As Michonne comes over to help him all she sees is the Walkers chowing down on what she thinks is Rick’s corpse. WE all know there is no way Rick is going out like that but the big display of despair on her face that leaves her so stunned she drops her sword is a big sign on how emotionally invested she is in him. Then big surprise Rick pops out, they kill the walkers, etc. But the whole instance led her to tell Rick how much he means to her and it’s a great moment for the characters to show their true affection for each other and they’re not just bumping uglies. They quietly pick up all the many different kinds of guns and deliver them over to the Scavengers thinking this will get them on board. But their damn leader Jadis (Pollyanna McIntosh) says it’s not enough and they want more still. Really lady? Have you not seen you’re living in a junkyard?! So after they think they’ve done enough Rick and Co. take it back to the ol’ scavenging drawing board. Except now Tara (Alanna Masterson) who was thinking she was going to get to keep her Oceanside peeps a secret now feels the need to spill the beans to Rick. 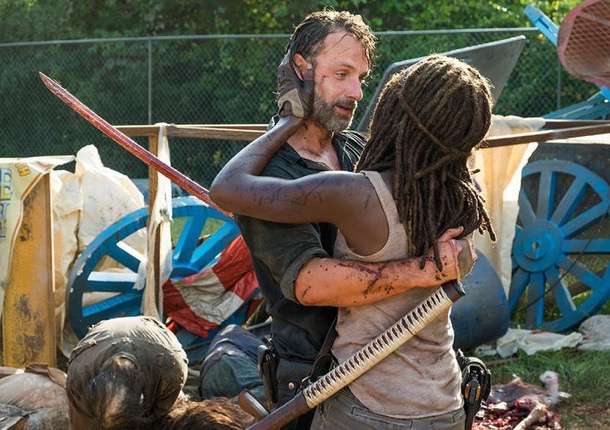 The other story that developed in this episode is Rosita (Christian Serratos) really coming unwound and going stir crazy on enacting vengeance on Negan. She lashes out at Father Gabriel ( Seth Gilliam) saying it’s his fault that he talked her out of killing Negan when she had the chance and that Spencer and Olivia would still be alive. Uh no, Rosita it’s your terrible aim as to why Negan is still alive!! Frustrated by the situation with the Scavengers and their strike back plan being put on hold she ventures to The Hilltop to talk to Sasha (Sonequa Martin-Green) and ask for her help in carrying out her plan. Sasha agrees but only if she gets to kill Negan herself. To which Rosita pulls out a long rifle just in the style that Sasha used to carry and gives it to her like a birthday present. They both agree it’s a suicide mission but that it’s worth it to them. I think this is idiotic as hell not only in the sense that there are only two of them but the fact that if they fail the repercussions against Alexandria are going to be very severe from Negan. Honestly I almost think with Sonequa getting the lead role on the next Star Trek series that this might be their way to get her off the show. With only a few episodes left this season it’s getting close to finale so we’ll see! 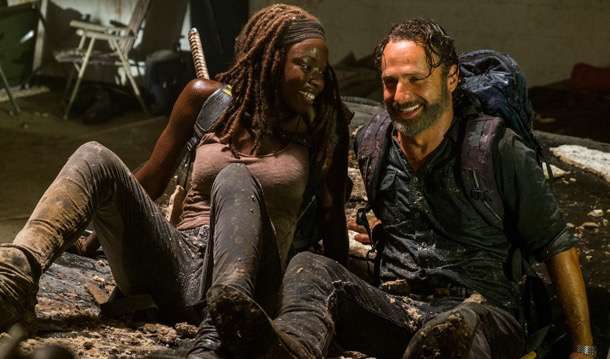