Home / Derek • Reviews / The Walking Dead Season 7 Episode 4 Review! Derek Says, “Jeffrey Dean Morgan Is Doing A Great Job, But What Is With The Dancing?”

When the New Neighbor stops by 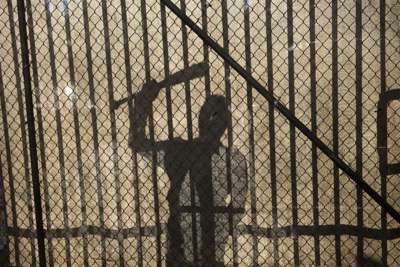 The whole deal with Negan (Jeffrey Dean Morgan) is “you provide for me.” Now in Ep. 4 it’s time for him to collect. He shows up with his group of “Saviors” to come take from the community of Alexandria what he feels they are owed such as weapons, supplies, medicine etc. They come in and go from house to house and just have their pick of whatever they fancy to take back with them. All the while all the residents of Alexandria can stand there and watch as their seeing how their new form of life is beginning. 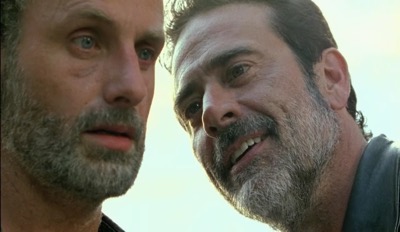 Now there’s so many scenarios one can think of. Why don’t they just shoot Negan in the head? Why didn’t they just wait for the “Saviors” to show up and gun as many of them down as possible? Or they could even wait for them to come inside and then take them by surprise and just go out in a bloody blaze of glory?! Well the simple answer is then most if not all of our heroes would be dead and we wouldn’t have a show. But I’m sure at least some of you have come up with these ideas. 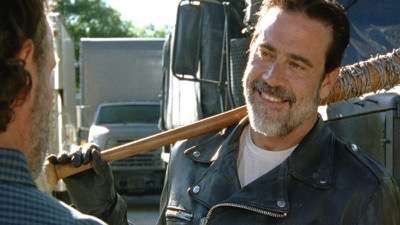 To put it simply though Negan is able to do all of this out of FEAR. By taking two of their best friends away from them and showing his dominance that Rick (Andrew Lincoln) and Co. can only keep their hands at their sides because they don’t want to lose anyone else. Now as a group they must stick together even more because each other is all they have. And it’s painful. You can see it on Rick, Daryl (Norman Reedus), Rosita (Christian Serratos), and Michonne (Danai Gurira) especially. The restraint the actors use as they let Negan talk down and belittle them like they’re basically his small children. You can see the muscles tense in their faces and their mouths closed to mask the grinding of their teeth in frustration. Man, this sucks! I wanna see him get busted in the face! Ugghhhh! But I get it. This the season we’re going to have and I’m just going to have to be like the characters and deal with this smiling prick of a Cheshire Cat. As much as I think Morgan is doing a great job at being an evil leader I am starting to really be bothered by one thing. What is with the dancing?! Was he in an interpreted dance class before this? There’s so many times that he talks that he feels the need to swing his hips or throw his shoulders about. I don’t get it and its starting to annoy the crap out of me. 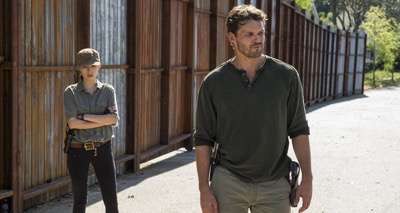 In one of the last scenes Rick tries to explain to Michonne his reasoning for not challenging Negan and tells her the story of his past friend Shane (Jon Bernthal) and wife Lori (Sarah Wayne Callies). The importance of this is the reveal that Rick for sure believes that Judith is not his baby but he still cares for her like she is. Oh wow. Nice little plot bomb dropped there.

Before I head out I just want to go back to last weeks episode where we were meant to start feeling sorry for poor old Dwight (Austin Amelio). Welllllll that’s all gone! His scene with Rosita and Spencer (Austin Nichols) was such a reminder that this guy has earned the viewers’ distaste for him. Didn’t like him before, I never fully came around, and now I’m right back where I was last season. He is a weaselly, power abusing, douchebag. Want him deaddddd! And a painful one. Part of me almost hates him as much as I hate Negan. Probably because I don’t have any respect for him seeing as he’s just a skinny bitch who if any of our heroes could just go one on one with him they’d kick the Thanksgiving stuffing out of him! Ahhhhh…..okay. Breathe. Had to get that out.

See you all at The Hilltop Colony next week!