Suddenly Susan got the pull of her lifetime when she rolled the dice and met Mr. Tom Cruise at the Edge of Tomorrow autograph signing. That’s pretty awesome if you ask me!

The signing was a surprise because they didn’t even have the cast listed, so you just take a chance with picking which show to pull the raffle for. Crazy times!

Take a look at Suddenly Susan’s full recap below!

San Diego Comic Con 2013 – what a whirlwind!! For me, this was the best Comic Con yet. One of the highlights of any Comic Con is getting to hang with MTF family members, including some that I don’t often see. Together there was Mike the Fanboy himself, Billy Beer, The Novel Strumpet, and Erica the Lovely. We also fought in the autograph trenches with some awesome MTF readers such as Wisconsin boys Andrew and John, The Other Mike, Erica’s sister Linda, and a cool cat I met in line named Kendrich. As I fondly reminisce about it at my day job, I was dreading the daunting task of writing about my experiences – only because there were SO many. Then a wise man, whose name rhymes with bike, suggested I break each encounter into its own article. So here goes…

Saturday is the biggest day at the Con and some surprise guests always make an appearance. One of the panels schedule that day was “Edge of Tomorrow” starring Tom Cruise. While the talent listed was “TBA,” I had a gut feeling Tom himself might show. In the wee hours of Saturday morning, person after person took a turn at pulling a winning autograph ticket for “True Blood,” or “The Vampire Diaries”. But when it came my turn, I took a chance, rolled the dice, and pulled a winning ticket for Tom’s movie. Well played Suddenly Susan, well played.

I arrived at the signing early, just in case Tom did show, as I did not want to get shuffled through the line if that were running late on time. Everyone waiting was all abuzz as to whether or not Tom would be there, or who at all from the cast. Then we heard that Tom was indeed at the panel. He’d have to come to the signing then, right? Only 15 minutes to go and loud cheering could be heard from around the booth. It was Tom – he was here!! I took a shot and it paid off big time. I’ve never met Mr. Cruise before, but always wanted to in a calm setting. There’s never a calm setting where Tom is concerned, so this was the opportunity of a lifetime. Also in tow were co-stars Emily Blunt and Bill Paxton. Both of whom I adore, so this is a triple score, a hat-trick of autographs! 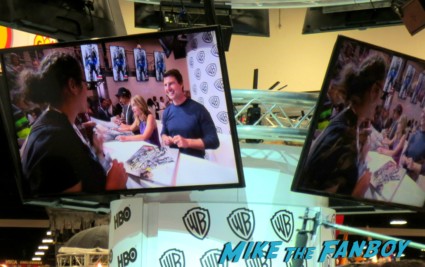 The first few folks in line were able to take photos with both Emily and Tom, something pretty unheard of, especially at the Warner Brothers booth. Then security stepped in and that was the end of that. 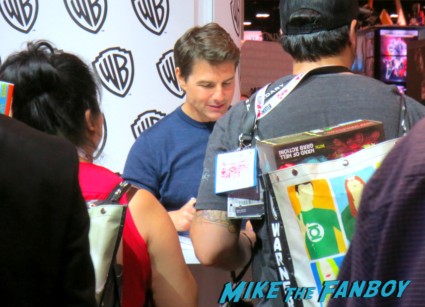 However, we could see Tom talking to security and we were told by those in front that Tom instructed them NOT to rush anyone and that he was going to take his time with each and every person. Rock on Tom, rock on! 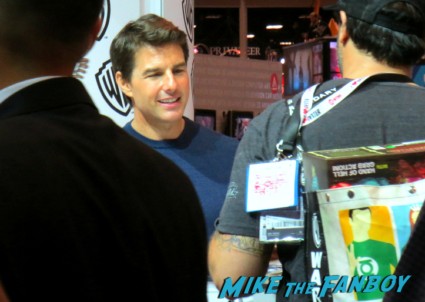 First up was director Doug Liman and writer Christopher McQuarrie. Both were friendly and happy to greet the fans. 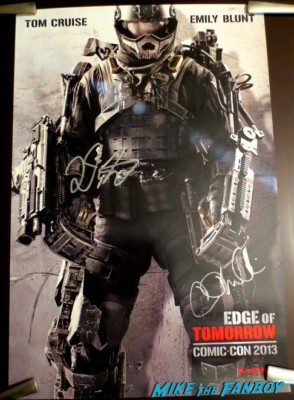 Next in line was Emily. I asked her to personalize mine (of course) and told her, I’m sure she’s heard this a million times, but I love her in The Devil Wears Prada. 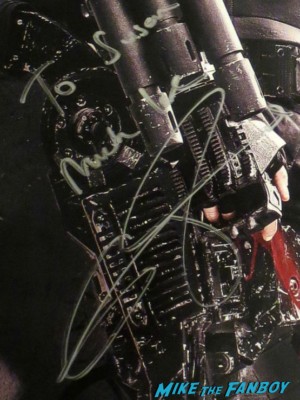 She sincerely smiled, said aww, and thank you so much. She also said it’s such a funny movie. I told her my friends and I call each other “six”, and she laughed. So far, so good. 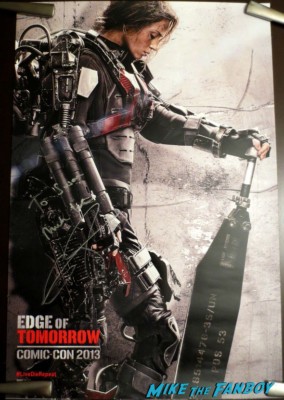 Next up was Tom. I waited for the woman ahead of me, who named every movie he was ever in ever. He smiled and thanked her after each one. I kid you not. That exchange took some time, let me tell you. 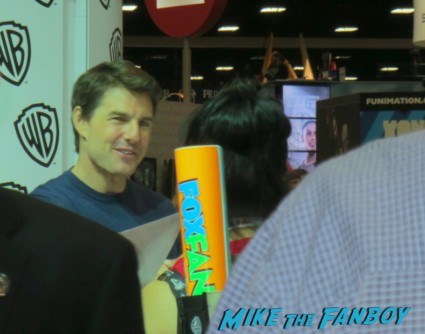 I waited patiently and when it was my turn, Tom put down his Sharpie, shook my hand, and asked my name. As he was signing my poster, I told him how I was on line at 2am (actually Billy was – thanks Billy!!!) for a chance to win a ticket just in case he showed up. He smiled and shook his head, saying wow. 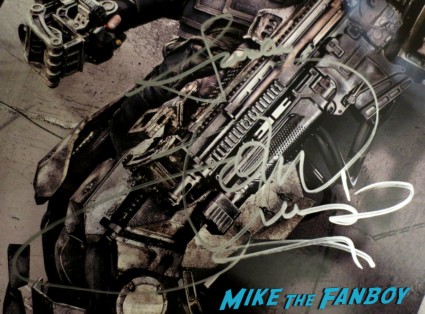 He was so genuine and sincere. That’s’ what really struck me. I’ll take a phony thank you so much any day of the week. It certainly beats a scowl or no eye contact. But you could tell he truly appreciated every person who came through just to meet him. I babbled about my favorite films of his as he smiled away. When I was done speaking, he said it was nice meeting me. Heck yes it was! 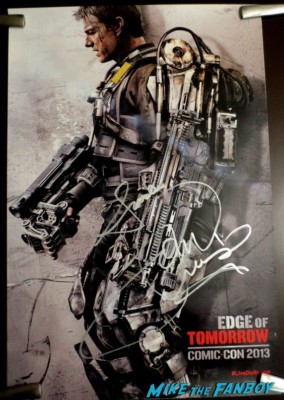 Bill Paxton was last on the line and he was also friendly and sincere. I told him how much I enjoyed “Frailty” and the thanked me very much, saying he’s very proud of that film, then quickly added, “and this one”! I love that he put to Susan, “fondly” Bill Paxton. That’s the first “fondly” I’ve ever received on an autograph. Nice touch Bill. 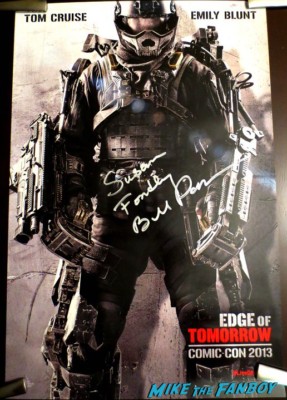 If that were the only signing I had gotten into, I would still call Comic Con 2013 a rousing success. But, there is much more to come. Stay tuned!