Ryan Reynolds is certainly lighting up the box office as Deadpool these days and he has a new film coming out called Free Guy that looks really funny. I’ve been a fan for a long long time.

Back in 2007… OMG, 2007 yesh! I was lucky enough to meet Ryan Reynolds really briefly. It’s funny back then I was literally the only person there asking. He was super nice about stopping.

The funny thing is, I had him sign a Van Wilder DVD cover, which yes, I framed even, and as I was pulling out my pen my bad ripped and scores of different colored paint pens rolled out onto the driveway. Sigh. What to do right, I just shrugged as pens scattered all over the ground. Security was helping pick them up as I got a photo with Ryan.

Still he was nice about it, I expected him to do a wisecrack but he didn’t. That’s probably for the best. 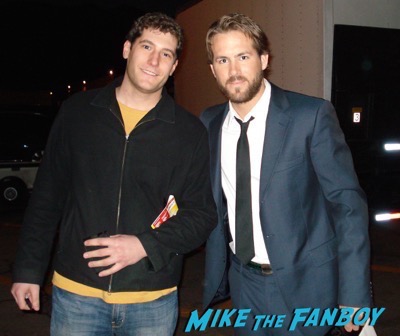 It was a fun moment to be sure, God bless the Canadians!