Home / Outlander • The Lovely Erica • The Novel Strumpet • TV Heartbeat / TV Heartbeat preview! Outlander Debuts Tomorrow!! An Intro to the Show! What is an Outlander? Watch the Pilot For Free Right Now!!!

There’s been a lot of noise and build up for the new series, Outlander, which debuts on Starz tomorrow night. Yes, TV Heartbeat has been a part of that since, as a long-term fan of the books and showrunner Ron Moore, it’s a no-brainer that I’ll be handing Starz my money and parking myself in front of the TV on Saturday nights starting tomorrow!

I’ve been covering the show’s launch since last June and since The Novel Strumpet (Alicia) is also a huge big fan, we’ll continue to cover Outlander with recaps and swag contests (more on that in a bit!). 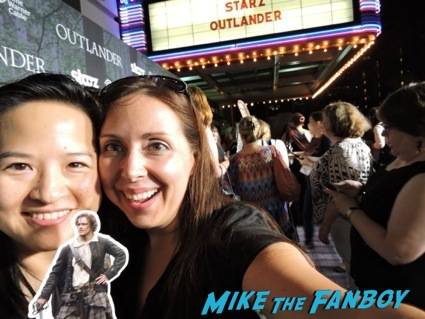 For the rest of the world, all of this hullabaloo may seem a little mysterious so here’s a spoiler-free introduction to the show!

What is an Outlander?

To start off, “Outlander” is a translation of old Scottish Gaelic word, “Sassenach” which means an English person or, more literally, a foreigner. Although they are neighbors, relations between Scotland and England haven’t always been easy, especially 200 years ago.

Outlander is the story of Claire Randall, an English woman visiting Scotland when she falls backward in time 200 years. Ergo, she really is out of place, definitely an Outlander. (Makes perfect sense now, right?)

Outlander is hard to classify

The TV show is based on a series of best-selling books that can be found in lots of different places at the book store: fiction, romance, historical fiction, fantasy, etc… The books aren’t super easy to classify – other than totally engrossing!

Some stores classify Outlander as a romance because the central focus of the saga is on Claire and her love life is a big part of her story. Yep, that is a part of this story, but it’s a well-thought out story with earned affection — her relationships aren’t based on someone being really hot and the other smelling delicious. Nope! The romantic part of the story grows from a bond that evolves during the extreme circumstances she’s thrown into.

Claire’s relationships drive part of the saga, but the story also intersects with history and huge events. Over the course of the 8 books, there are quite a few political battles, historical conflicts and many battle scenes. Hence, the frequent classification as historical fiction.

Outlander can get quite brutal and bloody and the TV series is not going to shy away from those plotlines. That’s one of the reasons why this show is on Starz.

So it is a great romance, a rousing adventure, a fascinating look at historical power plays and also much, much more!

Game of Thrones and Outlander have some things in common:
• They are both risky, expensive TV series that can be a game-changer for the network
• Based on a world-wide, best-selling series of books
• Devout, passionate book fans who know every single detail of the world
• Epic story spanning many lands
• Strong female characters that break the mold for their time
• Sometimes classified as historical fiction (if you count Westeros as a real place)
• Fantasy elements (to varying degrees)
• An involved author that lives in the Southwest – George RR Martin and Diana Gabaldon are actually friends.

But the actual stories themselves are very, very different:

Game of Thrones takes place in a mythical land.
Outlander takes in Scotland during real historical events – some locations, dates and people may seem familiar to folks. (Expect tourism to spike in the highlands!)

Game of Thrones is about the different Houses that want to rule the world.
Outlander primarily focuses on one character – Claire Beauchamp Randall (Caitriona Balfe). The story is told through her eyes and her point of view. 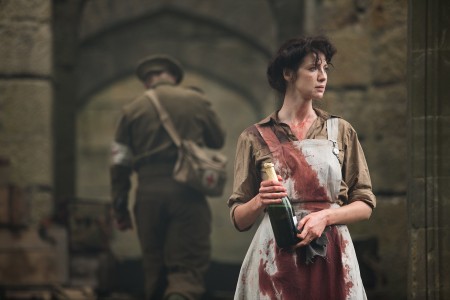 So Outlander is on the same scale as Game of Thrones (epic, romantic, shocking, brutal, gorgeous, etc…), but the story is completely different — it’s not a wannabe. 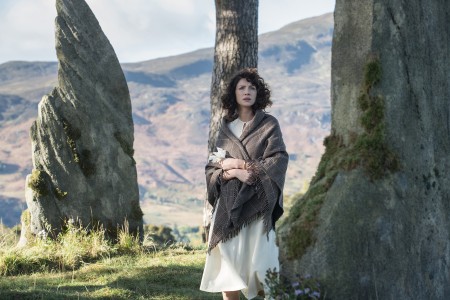 Starz and Ron Moore headed to Scotland to capture some of the most amazing vistas. 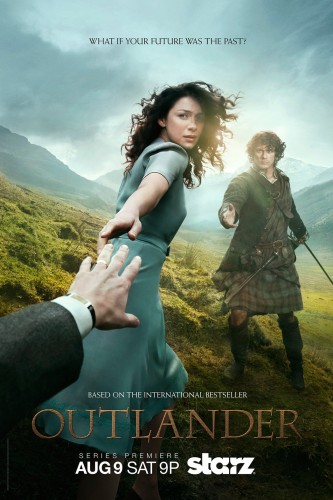 To make this show vividly come to live, the creative team is carefully and deliberately fussing with the show’s authenticity down to weaving their own tartans for the different clans. 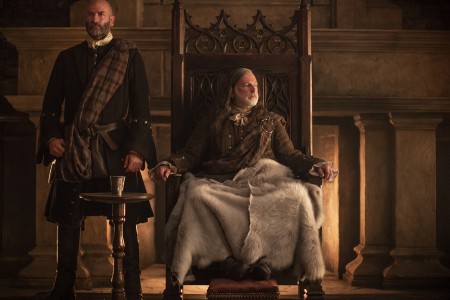 Production was more difficult than originally thought so the start date for the show was pushed back 6 months and they are breaking the first season into two parts to allow additional time to perfect the second half.

Composer Bear McCreary is scoring this show with achingly beautiful music. Bear is one of my favorite composers since his music is gorgeous, but also highly evocative. We’re in for a treat! (Yes, there will be bag pipes!)

Yes, we had to wait longer for this show, but it’ll be worth it!

Starz has so much faith in the show that they’ve opened their first shop where you can buy your own Outlander goodies! They also have a sale now before the premiere so now is a great time to make a purchase by clicking here!

Intrigued? Want to watch the show? Starz is offering up the first episode online for free!

Yes free! So you have no excuses!!

Click below to watch the pilot and then start your subscription to Starz to catch the rest of the series on Saturday nights!

More on Outlander to come!

TV Heartbeat and Written Revelry are teaming up on Mike the Fanboy!

Because we love this show so much, we’re going to do weekly re-caps/discussions on each episode! Each Sunday we’ll post our take on the most recent episode so please join in on the discussion – book readers and show watchers alike! We’ll keep the discussion spoiler-free for non-book readers unless it’s VERY clearly marked (all images will be spoiler-free).

If that wasn’t enough, we’re going to do a MONTHLY Outlander swag giveaway! We’ve been crossing the country back and forth to the various Outlander events and have lots of goodies to share! (Thank you, Starz!!) 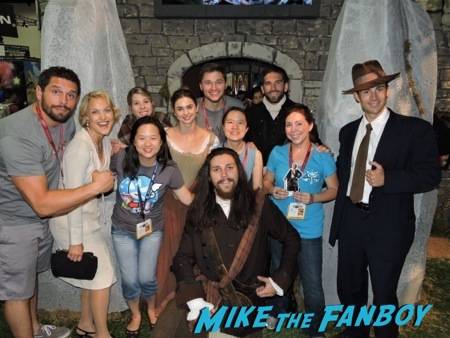 Erica, Linda, myself and #PocketJaime with the wonderful actors and crew at the “Outlander” booth

We’ll have a different prize pack each month with lots of easy ways to enter so make sure you check back! Here’s a look at some of the treats we have to share! 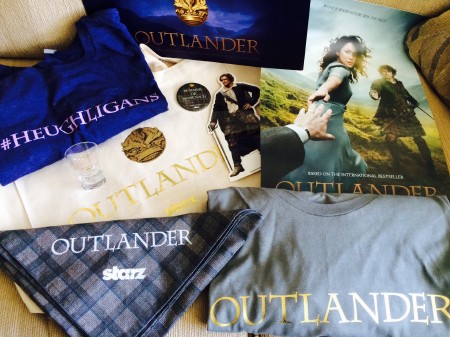 Alright! Let’s get set to journey through the stones!