How awesome is the Vikings cast? Seriously! They are super awesome! As you all know, Vikings is one of my favorite shows and this past weekend at SDCC the cast held a meet and greet and autograph signing for fans. Now, I was going to go, but sadly I heard that the line started hours before, so I figured it would be impossible.

MTF Reader and all around slice of awesome Daria headed down and has a full recap below!

Hail Odin! Vikings of Midgard! The Vikings cast along with The History Channel did an awesome thing for fans.  They held a cast signing and photo op session
At San Diego’s Comic Con on July 25, 2014.

Comic-con being the monster that it is, almost makes it impossible to meet your favorite actors/actresses, let alone line up for a true first come first serve signing and photo op session.

The Vikings cast meet was one of the things I was looking forward to most at Comic Con. I attended an event after their first season on the air, and the cast was awesome and approachable. They signed, posed for pics and chatted with everyone. One of the most fan friendly casts I’ve had the pleasure of meeting. Knowing that, I was confident that they would take care of their fans at this awesome event.

Now, we as Comic Con goers, know that nothing is ever as easy and painless as it seems.

Friday was finally upon me. The signing was to take place from 1-2pm. I figured that 11am would be a respectable time to show up and carve out my space in line. Wrong. I hopped the shuttle to the convention center around 8:30 am or so, hoping to kill some time inside. That’s when I got a tweet update stating that a line was already forming for Vikings. Ugh!!!! I was happy that Vikings was getting this much attention and it was bittersweet since I now had at least a four hour wait ahead of me. 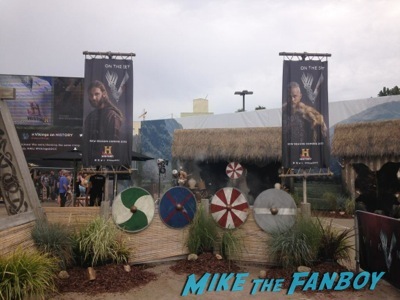 After battling my way through troves of various Malificents, Batmans and Spider-Mans of many shapes, sizes and scents I finally arrived at Valhalla.  I saw some people sectioned off behind barricades, and a line in addition to that. I went to the back of the line and settled in. I found out that the first 25 people were guaranteed the autographs/photo op and the rest of us were just basically hopeful fans.

Since I had plenty of time ahead of me, I took in the scenery. It was a unique interactive display. From where I stood in line, I was able to see the front of a Vikings ship set up in front of an ocean background and a fighting scene, I believe set off in the distance. The whole display looked picture perfect. There were rolling racks of Vikings costumes ready to go for those lucky enough to go through the Vikings experience. They were able to get their hair and makeup done Vikings style and film a 30second video dressed in Vikings garb set up in three different stations. I was hoping I would have time after the signing. We would have to see. 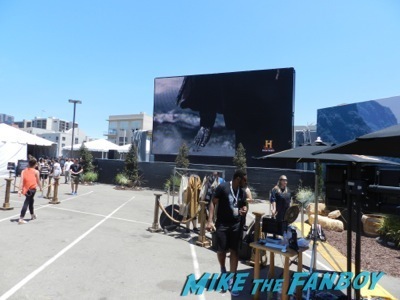 Vikings performers roamed around and interacted with the crowd, trying to keep us happy. They posed in their warrior poses and took pictures with fans. They even went around and asked us how we were holding up. I’ve never had that experience at Comic Con. Usually, everyone is yelling at you to crowd together, or not to sit down and they are definitely not concerned with your state of happiness. That alone set this experience apart from anything else I did during my week at Comic Con.  All this and you didn’t even need a pass, since it was an offsite event.

I was probably somewhere in the sixties as my place in line, which soon got bumped up in the eighties as “friends” of people in line showed up. I informed the first few people behind me that I too had a couple people coming. We all know how much we hate line cutters, but if you warn me ahead of time I won’t hate you as much, so I like to extend the courtesy to others. They were fine with it.  Especially the guy who had a picture of his wife’s cleavage to get signed. Better than nothing I guess. 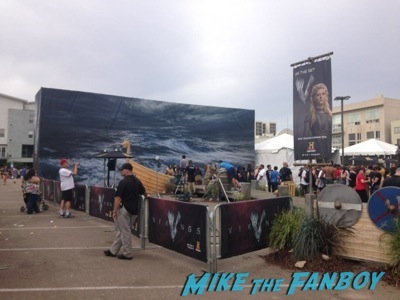 There were about ten or fifteen people behind me when security decided to cap the line.  Knowing how awesome the cast is, I figured 100 people in an hour limited to one item a piece should be a piece of cake.

All of a sudden, I heard a huge roar from the crowd. It was time! The sun having beaten down for the last hour and a half of my four hour wait, I was doubly excited. Clive Standen was the first on set. He ran up to the Vikings boat and posed for a few pics while the crowd went berserk. He waved to everyone and then went off to do some press. Next up was Kathryn Winnick.  She looked amazing in a killer orange outfit and she went up on the boat and Clive came out of no where and joined her with his boundless energy and hunky good looks. 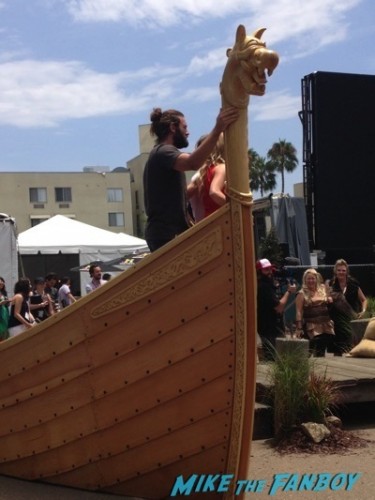 The moment we were all waiting for came when the sexy Travis Fimmel slowly trickled into view, followed closely by the yummy Alexander Ludwig (who looked SUPER hot with the man bun he was sporting). He apparently let his hair grow out. Goody for us.

The whole cast along with the creator Michael Hurst boarded the boat, took some pics and waved to us.  They debarked and soon the signing was underway. Our line didn’t move for the first twenty minutes or so. I saw the cast popping up and down graciously taking photos with their fans….and that’s when I knew this was too good to be true.

Slowly the line began to move.  More and more time went by, and less and less people were moving through. The reason for that is that the cast is so kick ass that they talk to you. Great for the victorious fans at the table, but not so great for those of us having heart attacks in the slow moving line.

Security and the History Channel staff were great. Checking in on the line, being nice and upbeat. Some of the best interactions I’ve ever had at Comic Con.

I was holding on to hope now. I was maybe twenty people away from getting in the barricade and into the signing. The problem was that it was 1:50 pm with ten minutes left. They let a few more people get through, then security started pulling the ropes and the signing was over. They didn’t tell those of us still in line anything. They just left us there.  They dropped the axe on letting us know it was over. Not that any of us wanted to leave anyway.

The cast got up from their table and took one last group shot. Some of us in line started calling out for them to come over. Alexander was the first to run over and he started signing at the far end. Needless to say, I got him to finish my two Vikings books I needed him on. Clive and Kathyrn came over next and started signing and taking pics with those of us left in line. Always great to their fans those two.

Then the amazingly gorgeous Travis Fimmel made his way over and he started signing and taking pics down the line. He is an incredibly soft spoken guy and really nice and down to earth. He took his time and signed as much as possible. He got to the end and there were people behind our barricade that weren’t able to get into our signing line that were now yelling for Travis.

The coolness of Travis goes on as he tried to come from behind the barricade to be able to sign for the fans behind us, however security stopped him (a good idea since at this point everything was a chaotic and frenzied mess). Travis signed as much as he could with people leaning over and taking selfies with him from five feet away and then he said his goodbye and took off.

I’m one happy Vikings fan. I was lucky enough to get everything signed. A classy cast taking care of their fans is always an amazing experience. Overall, the whole event was run pretty well with happy people and the cast kicked some ass. All Hail Odin and get ready for season 3! 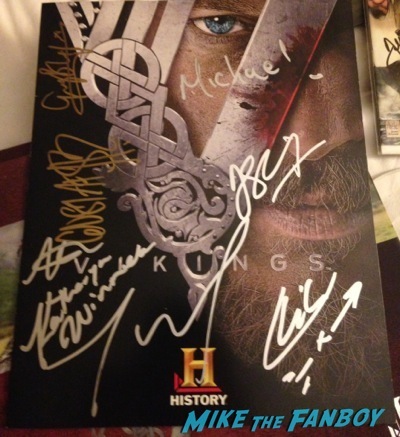