This has been an amazing season of Vikings and it’s only episode 5! So much happens with every episode it’s hard to believe right!? This week there was massacres, wars, and even possibly Odin himself?

It’s more like “Déjà vu”. You’ll know exactly what I’m talking about once you’ve seen the episode. After a monster of an episode last week, you would expect things to settle down. However, we were in for more chilling surprises that left us gasping. The series never slows down; yet another reason to love Vikings.

The episode opens with an impressive fleet of ships heading towards Kattegat. Ragnar and Athelstan are huddled in front of the ship. You can’t help, but laugh at the way Ragnar asks Athelstan to tell him about Paris over and over again. He is like little kid begging for his favorite bedtime story. Athelstan enjoys describing Paris to Ragnar who eagerly hangs on to every single word with gleaming eyes. He goes on to say that, “It was like a dream. Inside the walls are these buildings made out of marble and stone.” Ragnar is dreaming about it as Athelstan relives his journey to Paris. Clearly not happy with his marriage, Ragnar was excited to hear about all the beautiful women. His interest grows when Athelstan confesses, “I almost questioned my vows of celibacy”. Meanwhile Floki eyes them both while his anger towards Athelstan grows stronger.

Poor Bjorn attends to Porunn and asks if she is thirsty. He feels absolutely helpless and frustrated. Porunn replies, “No, I’m not thirsty, or hungry or really alive”. For someone who thrived to be like Lagertha, she realizes that her once promising future might just be a pipe dream now. She would rather die than be handicapped. It seems like her face took all the beating, but all her limbs are intact. Porunn could still totally be an awesome shield maiden with a wicked scar. No need for war paint. 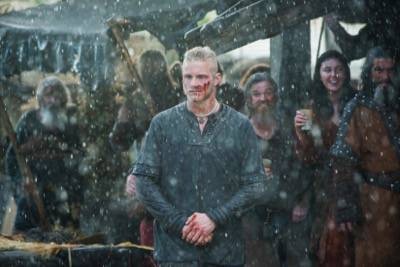 Once arrived in Kattegat, the injured are attended. Lagertha comes across Torstein’s baby mommas and they receive the unfortunate news. Not seeing Siggy, Rollo yells out searching for her. Ragnar feels the disturbance in the air as soon as he sets his eyes on Aslaug. Ragnar questions the absence of his sons. Burden by the recent events Aslaug is slow to react. She finally tells them both the disheartening news. In shock, Rollo claims, “The Gods are mistaken”. Floki was quick to reply, “No, The Gods are never mistaken”. After snapping back from denial, Rollo blames himself for Siggy’s death saying, “I did not treat her well. This is the truth”. He regrets how he left things between Siggy. Never got to say goodbye or ended on a happy note. Ragnar is outraged, but tries to keep his cool while he questioning Aslaug. “Why was Siggy taking care of our children?” Helga came to the rescue, but was shot down by Ragnar. He knew instantly that Aslaug was hiding something. She avoids more questions by running away to see Porunn. 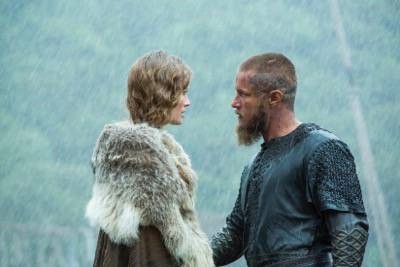 Aslaug visits Porunn to offer help. Not being in such a people-friendly state, Porunn replies, “I don’t want any help. How can you help me with this?” Aslaug goes mute as soon as she turns around to face her. I can’t really blame her for being speechless since Porunn looked like a creature straight out of Middle Earth.

Drenched in rain and booze, Rollo spiraled into his old ways. News about Siggy’s passing really took a hit on our gentle giant. While drowning his sorrows in ale, other warriors picked on him for being visibly devastated over a woman. They’ve all lost family and friends during the battle and questioned, “What is so special about you?” Bjorn comes to the rescue as Rollo was about to get into a flight. He failed to calm him down, which led to a brawl between him and his uncle. Safe to assume they are both are letting out their frustrations. Call it Viking “Family Therapy”. The cheers roared as Bjorn knocked Rollo to the ground. It was a fight out of pity and honestly, Rollo wanted to get beaten up. He preferred the physical pain over the unbearable emotional pain. 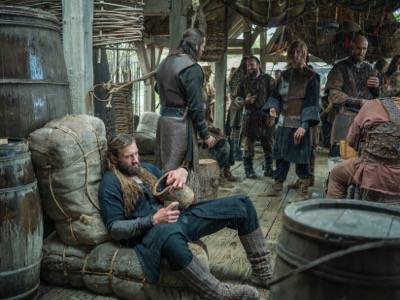 Ragnar keeps pushing, “Why did you leave Siggy to look after my sons?” Aslaug tries to be coy. He goes on, “Why did the boys walk over a frozen lake?” She uses sex in an attempt to distract Ragnar, but it backfires when he denies her. Outch! Aslaug is less than pleased when he leaves her high and dry. We are clear on where they stand as a couple now. 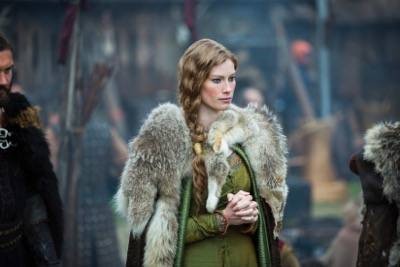 We need to see Floki wearing fur more often. He is such a diva. Lagertha, who never takes a break from being a boss, suggests that more people should join the new settlement and farm. Floki laughs hysterically and mocks the very idea by amusingly stating, “Yes, They could go and work for a Christian King. In a Christian country. Perhaps they could also become Christians. Why not?” Such sass. Knowing better than to argue with Floki, Lagertha remains quiet. He continues to butt heads as he questions why Ragnar listens to Athelstan. “True, I don’t know why Ragnar listens to me, not when he could listen to you Floki” The sarcastic reply of our tiny Viking silences Floki.

Bjorn walks in all banged up sporting an attitude that Lagertha have trouble digesting. He tells everyone that he got into a fight with Rollo to stop people from killing him. When Lagertha asked about Porunn, Bjorn replies, “No, she does not want to see me. If she needs me, she’ll tell me. She is a woman and not a child.” He better check that tude! 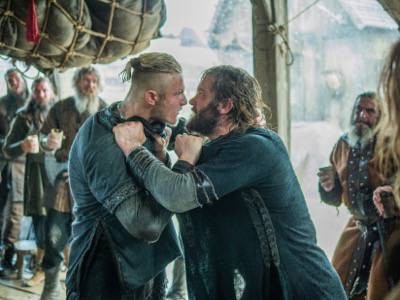 After Bjorn leaves, Floki turns his attention to Helga. He is quite aware that Siggy’s death wasn’t a mere unfortunate coincidence. Helga being the innocent sole, shares everything with Floki. He kept asking about the name, Harbard. He eventually revealed that, “Harbard is not a human being. Harbard is a God.” He shows excitement and puts a positive spin on everything that went down.

Lagertha gets the ugly news she never expected. Reality slaps her in the face in a form of young Jesus Christ. Yup, aka Kalf. She seeks Ragnar’s help to get her land back. Even though Ragnar has no interest in starting a civil war, he knows how to pick his fights claiming, “Well, there’s never much use in arguing with you Lagertha.” Sounding like a true ex-husband, he is forced into aiding her in Hedeby.

Speaking of wives, Aslaug and Ragnar are having dinner as far away from each other as possible. The tension between them is thicker than his beard. Ragnar repeatedly questions about the wanderer, “Who is Harbard?” Aslaug stays quiet, but finally speaks up, “I’ll tell you who he was to your son. The son you leave behind. He took away Ivar’s pain. It was Harbard who stopped his suffering.” Not satisfied with her answers, he tries to carry Ivar. He instantly starts to cry.

Judith is a freak! She is definitely having some major Athelstan withdrawals. Aethelwulf confronts her about her distant demeanor. She reveals, “I am with child”. OMG! Athelstan is going to be a baby daddy. In a fit of rage, he storms out and starts banging his head. King Ecbert walks in on him, but Aethelwulf keeps the news to himself.

Troubling news emerges from the new settlement. King Ecbert sends out his son to deal with the attacks. He is more than agitated with these recent events. Aethlwulf agrees to go settle the disputes. 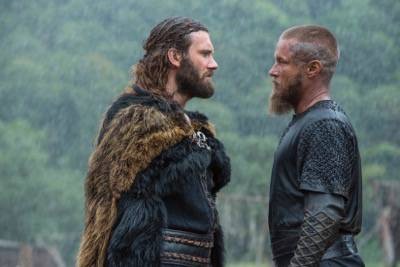 Ragnar goes to the seer to inquire about Paris. As always, the seer answers in a riddle, “I see that not the living, but the dead would conquer Paris”. Unlike the rest who walks away irritated and with more questions, Ragnar accepts his answer with a smile. I guess it’s safe to assume his understanding of the future, since he shared their new raiding destination, Paris with the rest of his warriors. Ragnar is pushing his bounds and accepting bigger challenges. He draws all the attention towards Athelstan saying, “It is better to travel with knowledge”. After his kids, Athelstan is definitely his MVP.

Infuriated by this news, Lagertha reminds Ragnar of his promise. Next thing we know, she charges in to the great hall in Hedeby with Ragnar a few too many steps behind her. To her surprise, Ragnar suggests a private discussion between him and Kalf. You can almost see the smoke coming out of her while turning crimson to match her dress. Having no interest in the earldom, Ragnar invites Kalf to join the Paris raid and leaves the dispute over the earldom in their hands. He can’t help his cheeky smile while saying, “That’s between you and my wife, and good luck with that”. The conversation takes an unexpected turn when Kalf confesses his desire towards Lagertha. Is he seriously trying to flirt his way out of this? Lagertha questions, “What am I supposed to do with that knowledge?” and Kalf, “What do you want to do?” Ok, they are totally flirting. Do we hear wedding bells? Nope, she is not that blinded by his boyish good looks.

For the very first time, we witness Rollo seeking answers from the seer. It’s more of a therapy session since he vents how Ragnar was always chosen over him, by his parents, and “my Lagertha”. Back up…he is STILL in love with Lagertha. “Why would I not want to betray him? Ragnar is my father, my mother, Lagertha, Siggiy. He is everything I cannot do. Everything I cannot be.” All these emotions come crashing down and the weight is crushing him to the ground. Even though he loves Ragnar, he is still angry and frustrated. Rollo devalues his existence saying that its “Hollowed out by failed ambitions” After a pause, the seer laughs, “Oh Rollo, If you truly knew what the Gods have in store for you, you would go down now and dance naked on the beach” Ok, that certainly sounds like great news. Not too much of a riddle.

Back in Wessex, all hell breaks loose when Aethelwulf massacre the entire new settlement. He sure knows how to “fix” a dispute. Not so different from the ruthless Pagens after all. All unarmed villages were butchered like animals, all in the name of God. Not a single sole survived. It seems Lagertha has more bad news heading her way. Now she is a shepherd without a flock.

Back in Kattegat Lagertha leaves since she is not getting the support she needs from Ragnar. Bjorn fails to convince her to stay. Instead, Lagertha leaves him with some words of advice, “You are a man now Bjorn. Act like one.” Meanwhile, Floki tells Ragnar about Harbard; “Harbard is another name for Odin”. Ragnar walks away nonchalantly. Maybe he sees his stories as desperate attempts to get back in the “inner circle”.

The episode ends with an outraged King Ecbert imprisoning all his nobles who sanctioned the massacre of the new settlement. He uses this incident to get rid of all the advisors who questioned his authority. And the Oscar goes to… Yup, it was all a setup. He killed two birds with one stone. What we thought was a deed due to a fit of rage, was all planned. Aethelwulf did exactly what his father wanted.

Wow! Things can’t possibly calm down after this week. Brace yourself for a bumpy ride next week.
Until then, Happy Raiding!