Home / On Location / Dave Checks Into Westworld After Meeting Aaron Paul and Thandie Newton As They Were Shooting In Singapore! Autographs! Selfies and More!

Just this past week, Aaron Paul, Evan Rachel Wood, Jeffrey Wright, Thandie Newton, Luke Hemsworth and Tom Flanagan were in Singapore to shoot an episode of the upcoming third season of Westworld. I guess the episode should be titled Eastworld!  We wondered which stars would be more fan-friendly: the actors playing the humans or the hosts?

Anyway, thanks to Manfred’s sleuthing, we figured out where the stars were staying, and we headed down to the hotel for dinner with the hopes of catching them there.  We knew shooting had not started yet, as Rachel Evan Wood had been posting her photos of the tourist destinations on her instagram account.

The star I wanted to meet most was Aaron Paul, who plays a new character who I am assuming is human based on the trailer. Armed with sharpies, a couple of photos and some index cards, I headed down to their hotel.

No other fans appeared to be in sight, production members were milling about the lobby with lanyards around their necks, and security seemed relaxed. These were all good signs.   So I settled down in the lobby lounge and ordered a drink and waited for Manfred to arrive. Of course I had brought some of my books along, hoping to give them to Aaron Paul for his baby daughter, Story.

I had barely finished my drink when a lady walked past me and jokingly said to someone: “I have a bone to pick with you!” I turned around and was surprised to see that she was chatting with Aaron Paul and his lovely wife Lauren!  Caught completely off guard, I struggled to fish out the photos I hoped to have signed out of the bag, but I only managed to pull out a couple of index cards. Index cards would have to do, I thought.

While Aaron and the lady chatted and took a selfie, I approached Lauren with some of my books for Story. She was exceedingly kind and gracious. I asked her if Aaron would sign. “Yes. Of course!” she smiled.

She told Aaron that I had given them the books for Story. He smiled. “Thank you. That’s very kind of you.” Then I struggled to take a selfie. “Let me,” said Aaron, placing an arm around my shoulder and taking the snap. I quickly asked him for two autographs: one for me, the other for my friend Robert. 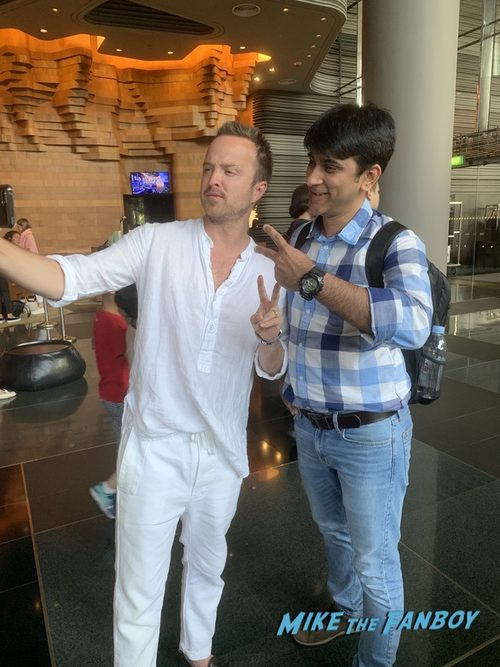 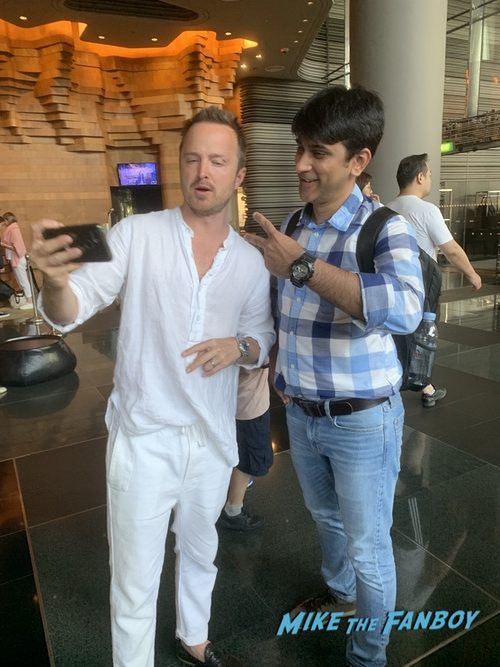 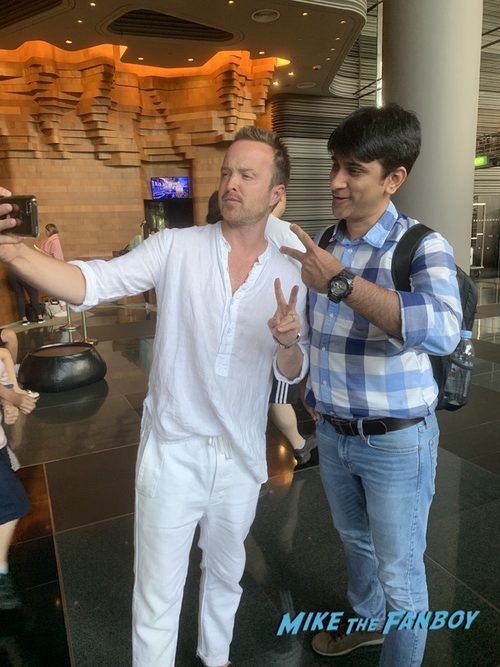 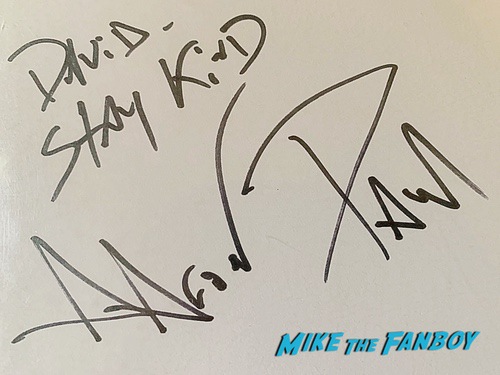 As he was signing, a guest recognized him: “Jesse Pinkman!” he cried. “Aaron Paul” Aaron corrected and then took time to pose for a selfie with the man. I thanked him again and gave him another book Emma’s  Elephant.  Lauren smiled and said, “We love Elephants.” They left the books at the concierge, saying they would pick them up later as they were headed out for dinner.”

Just then Manfred walked in the entrance. I pointed over to Aaron who again graciously agreed to a selfie before heading out the door. We sat back down at our table when Manfred overheard a member of the production crew discussing the arrivals of the other stars. So we decided to have a long leisurely dinner. I mean, after all we had a good table.

After about an hour we saw Thandie Newton walk through the entrance, looking coolly aloof, surrounded by production people and hotel staff. We decided not to approach, but about an half hour later, she emerged in a change of attire and ready to head out. Manfred raced up to her for a selfie but then hesitated. I encouraged him to ask since she was right in front of him. So he did. She looked rather put by the request but she agreed to one. With the selfie done, I tried to give her one of my books for her youngest child, but she looked at it and said:  “I have no were to put it.”  When I asked if she would sign an index card.  She sighed.  “I only sign if you have a photo.”  Then she turned on her heel and got in her car. I was about to say I do have a photo in my bag, but somehow I don’t think she would have signed that either. Perhaps she was tired and not in the best mood and I can understand that. 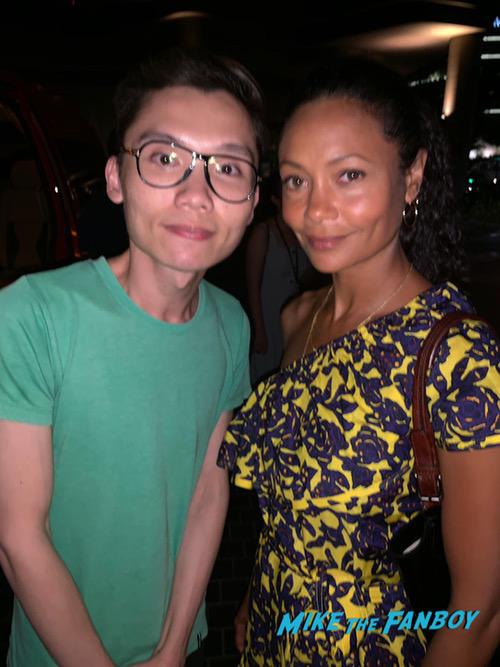 So we headed back to finish our dinner. As we were sitting down, one of her minders walked up to the table and rather condescendingly told us that while she understood we were fans, we were in no uncertain terms to approach the stars as they were here to film and it was for the stars’ security that fans should not approach. “We’ve told hotel security too,” she added before walking off.

We could only surmise that Thandie must have complained.   We were kind of put off by that. We were the only two fans there and we approached politely and they weren’t filming yet as it was their day off.  I understand the minders have a job to do, and that the stars don’t have to sign or pose if they don’t want to. But we don’t think we deserved that kind of treatment, especially seeing how nice and Aaron was to us.

After that we didn’t bother trying to look for the other stars. In fact, we didn’t see any other fan photos save one of Aaron and a fan in Chinatown. Others fans who did meet Aaron after filming said even though minders tried to keep them at bay and refused to let them take photos, Aaron made the point to greet and thank each of them. What a nice guy!

So to surmise this Westworld experience, I suppose I can say the human was a lot more hospitable than the host.