Oh dear… When you go to an event, you just never know what to expect. Ace headed out to meet one of his favorites, horror author William Friedkin. Now, Ace has met him before and had some amazing experiences.

This time however… That wasn’t the case. Doh!

Everyone has been there, but this one is a bit much. Check out Ace’s recap below!

So, I went to a book signing with William Friedkin.

If you are a close personal friend of mine, you know I am Friedkin crazy about his work. The Exorcist has to be one of my personal horror favorites. The film overall is just very well done. Of course, Friedkin’s habit for perfection made the movie what it is. The French Connection and To Live and Die in L.A. are also films that will stand the test of time…

Now, the height of his film career ranged from the 1970s to 1980s. We fast forward to 2014. He is in the talks with the True Detective show runners to direct the series. He has been presented with countless lifetime achievement awards across the globe within the last year.

I have been to several of his speaking events at the Aero and Cinefamily, DVD signings, and book signings. So yes, I have gotten his autograph before. He has always been such a nice man.

I arrived to the book signing around an hour before the event was supposed to start. Fortunately, there was only a few others just waiting. I purchased my book and had a seat. The people at the bookshop were very nice. They notified everyone that Mr. Friedkin would no longer speak for a short Q & A segment before the signing. Regardless, everyone sat and waited.

It was only a matter of time before William Friedkin showed. At the time of the arrival, there were a total of twelve people that attended the signing. After his arrival, there would be no more joining in on the fun.

There is a fifth dimension beyond that which is known to man. It is a dimension as vast as space and as timeless as infinity. It is the middle ground between light and shadow, between science and superstition, and it lies between the pit of man’s fears and the summit of his knowledge. This is the dimension of imagination. It is an area which we call the Twilight Zone.

The first person went up. He asked for his name. Mr. Friedkin signed his book. Then the fan placed the other three items and he signed those as well with personalizations. Friedkin, at the time, jokingly made a slight ebay remark. 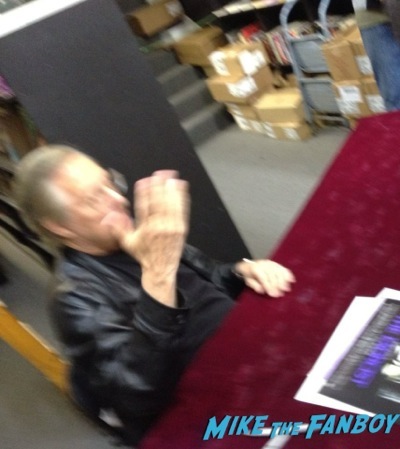 The next person was also asked for his name. He tells Friedkin his name and then Friedkin asks if he would like his name inscribed. The fan asks if he would just sign the book as it is for a friend. Friedkin starts raving about how the item would end up on ebay and as he asked for his two photos to be signed as well, and Friedkin kept repeating that these would end up on ebay once again. 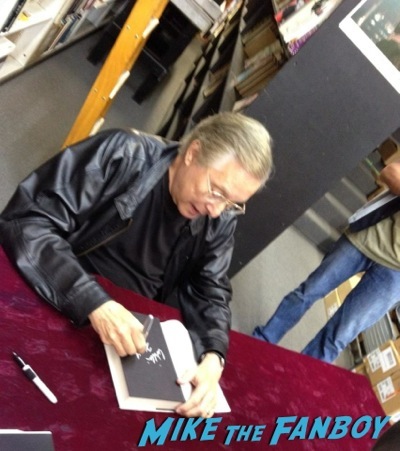 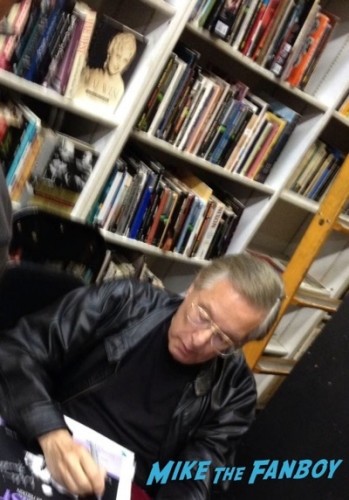 The third person walked up to Mr. Friedkin. He placed all his items on the table. He asked Mr. Friedkin if he would write some quote within the book. Friedkin claimed he wouldn’t use God’s name in vain. Therefore, he said he couldn’t. As he was signing the book, he asked if he was selling this stuff. The fan claimed he had too much respect for him. He agreed that some of the stuff would be for sale. Mr. Friedkin claimed he appreciated the honesty. He claimed, “I will do a couple.”

He also added, “I am normally not like this.” Then he uttered something about being stuck in traffic. 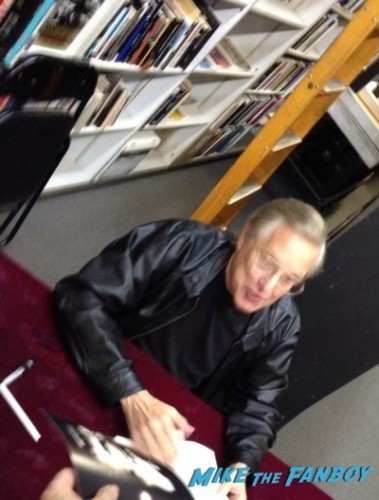 Therefore, Mr. Friedkin signed (picking and choosing) one of his posters, a couple lobby cards, a CD booklet, as well as the VHS cover. As he was signing the items, he screamed out “All these ebay motherfuckers.”

The next fan walked up with the paperback book. He gave his name and Friedkin asked if it would be personalized to him. He asked him kindly not too. He said that he is sharing it with his brother. Friedkin yelled “Yeah, sure…EBAY” once again. He picked and chose what he would sign. He claimed, “I will do a couple. I will sign this one and this one.” Then he asked, “Would you sign this one?” He blatantly said, “No.”

As I was walking up, he screamed once again, telling the owner, “See! Ebay motherfuckers.” The owner said that he could implement a policy of how many he wanted to sign. Mr. Friedkin said, “It’s just too much. Can’t sign all these things.”

Let me remind you, there is a crowd of 6-8 people in line.

As I walked up, he asked for my name. I gave him my name and thanked him for signing. I handed him the book, my two mini posters, an official lithograph with a film cell, and a behind the scenes photo. I asked him to personalize everything but the book. He signed the book. Signed the first poster and said, “this fucking thing is ending up on eBay.” I insisted that he personalize it. He grabbed my other photo claiming he wouldn’t sign the other foreign mini-poster. He was so frustrated that he creased the item. He didn’t personalize it. Then, I asked if he would personalize and sign my other mini-poster. He said, “No! How many fucking of (me) are there?” He then signed it. As he was signing it, I told him I have attended his screenings, DVD signings… I listed the places and events. Told him I loved his work. He thanked me and commented on me accumulating. 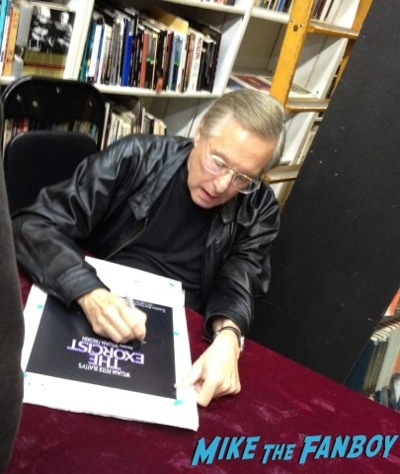 I walked away slowly as my admiration dissipated. I sat down for a moment. Of course, in shock.

As each fan walked up, I could hear the ebay comments and complaining about how he wasn’t getting a penny for some of the items he was signing. 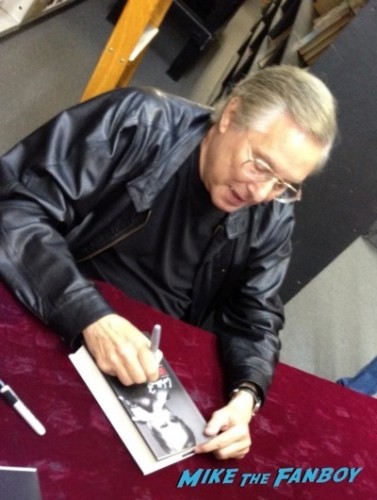 Now, everyone has their bad days… We are all human. But, I have to ask the question: Does it excuse us?


I wish I was exaggerating about how bad it was.


The worse part of it… there was a total of twelve people along for the experience. Typically, there is an almost endless line of people. It could have been such a pleasant experience.

Of course, I have been to several of his sit down signings. Now I admit, like every memorabilia collector, I regret what I got signed in the past. When I first started this autograph thing, I got a lot of non-important things signed. It’s not that I don’t cherish them as much, but I always strive to improve my collection. I brought my un-opened box set, lithograph and film cell, as well as mini-posters hoping for another great experience. I only wish that I left them untouched along with the event.

I didn’t even ask him any questions to prevent the feeling that it would be a waste of his time.

Without being dramatic, it does alter your perception on their movies.

His new restoration on Sorcerer is on Sale August 5th.

I think I will just pass on this one…

This experience will just be an unpleasant reminder every time I hit play. There is no rewind button.