Home / Pretty In Pinky • Q and A / It’s A Clockwork Orange Time! When Pinky Meets Malcom McDowell And Gary Oldman! Q And A Goodness!

Give a God Bless to Ms. Pinky! She had an amazing experience at the Alex Theater where Malcom McDowell was doing a rare q and a for A Clockwork Orange!

I’ve been wanting to meet Malcom for a while now, so I might have to head out myself!

Hello, my lovelies. Pinky Lovejoy-Coogan here still buzzing from being able to attend such a cool event. Earlier this week my husband, Keith, and I were lucky enough to see Stanley Kubrick’s iconic film A Clockwork Orange at the Alex Theater in Glendale. Even better? It was preceded by a Q&A with the film’s star, Malcom McDowell! And even better than that?! The Q&A was being moderated by none other than Gary Oldman himself. What an incredible experience to see the two acting legends on the stage discussing Malcolm’s first film which, it turns out, was the entire reason Gary Oldman was inspired to get into acting! Gary told Malcolm he was his hero growing up and Malcolm replied with, “And now you’re mine.” Folks, it just doesn’t get much better than that. Now, I’ll admit that I’d never seen the film before. My husband, however, saw it at the age of two and it’s one of his favorite films.

Seeing him watch the Q&A was like watching a little kid on Christmas morning, he was SO excited! At one point Malcolm even started singing the song, “Singing in the Rain” and Keith explained that it was like his “Dishes are Done, Man” thing, which I got a kick out of. To add even more coolness to the event, they had guys dressed as “droogs” all over the place, merchandise for sale (signed posters and DVDs), and egg chairs/pods to sit in. The whole thing was really awesome and when we arrived to the event the whole crowd felt electric and buzzing with energy. I was even lucky to meet both Malcom and Gary as they were leaving the red carpet and get pictures with both! 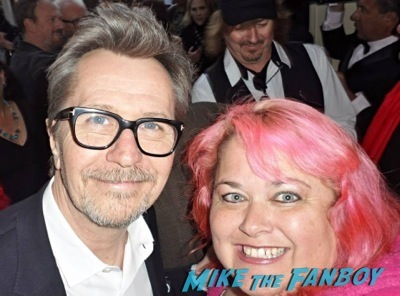 Color me stoked! In addition to a few other celebrities in attendance, I also saw fellow collector Big Mike, who looked really excited to be there, as well. I really enjoyed the film and was so happy to be able to watch it on the big screen. If you’re interested, this was the first of a  three-part series of events at the Alex Theater featuring Malcolm McDowell. Next Tuesday (4/8) they’ll be screening Time After Time and the following Tuesday (4/15) they’ll be screening Star Trek: Generations with a Q&A led by Michael Dorn (who played Lt. Commander Worf). The moderator for Time After Time is a surprise celebrity guest. If you’re interested in the screenings or would like additional information, please visit www.alextheatre.org.