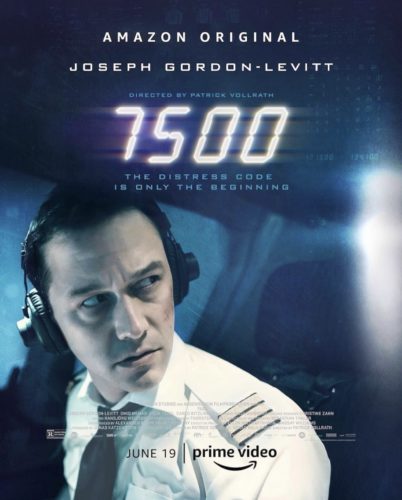 “7500” is a claustrophobic cinematic thrill-ride with Joseph Gordon-Levitt’s best performance to date. Gordon-Levitt’s legacy just took flight, however its one bumpy ride.

Soft-spoken American Tobias Ellis (Joseph Gordon-Levitt) is the co-pilot on a flight from Berlin to Paris. Attempting to relax his stressed colleague during the preflight checklist, pilot Michael Lutzmann (Carlo Kitzlinger) jokes around with Tobias when he discovers one of their flight attendants, Gökce, (Aylin Tezel) is Tobias’ girlfriend and that his personal life might be clouding his judgement. Shortly after takeoff, terrorists storm the cockpit and severely injury the pilot, but Tobias somehow manages to fight them off and contact ground control. However, tensions turn up another notch with the hijackers killing a passenger and threatening to kill more innocent individuals if they’re not allowed back into the cockpit. When hundreds of lives are in your hands, what do you?

Echoing classic cinema such as “Airport,” the Joseph Gordon-Levitt vehicle certainly captures the same excitement of “Executive Decision” and “Air Force One” with its terrifically tense airplane setting and thriller genre. Combing the best elements of agonizing aerial terror and uncertainty, an ordinary individual is put to the test and must challenge himself to become extraordinary. Although similar storylines exist, Joseph Gordon-Levitt’s acting elevates the film to another level and makes “7500” worth checking out.

Much like Ryan Reynolds in “Buried,” Gordon-Levitt leads viewers on a wonderful journey with this film taking place primarily in the cockpit. The concise and chaotic closeups help the tension swell with each passing moment. Gordon-Levitt for once actually acts and it’s his best performance since “Don Jon.” The exciting escalation in a confined cockpit certainly creates an amazing atmosphere for this genre flick. If not for a strong performance by Gordon-Levitt, I would suggest switching flights.

“7500” is not an over-the-top thriller overcompensating with ridiculous action, but in hindsight you wish there was more beyond the few fleeting moments. It provides a realistic scenario playing out without the glitz and glamour. Imagine “United 93,” but from the perspective of the pilots and not nearly as gut-wrenching. Sadly, the terrible terrorists torture you with their wimpy worrisome demeanors and are pretty pathetic overall. Initially, you could certainly feel frantic thinking will they or won’t they. However, after a while the film fumbles foregoing a cool concept and somehow stumbles back to the gate relatively unscathed.

The beginning starts strong before botching what would be an exciting, entertaining movie. Initially seeing the film play out with CCTV footage I thought we would be treated to something similar like Adam Rifkin’s “Look” utilizing unique footage from security cameras and digital devices. Sadly, this technique is only used for the first few minutes before being scrapped. Sure there is some turbulence from time to time, but don’t expect a smooth flight film. For 90 minutes, it’s interesting to watch, but unless you’re looking for a genre film or love Joseph Gordon-Levitt you might want to turn in your boarding pass.