Home / Big Mike • Q and A / Big Trouble In Little China Q And A! Big Mike Takes A Ride On the Pork Chop Express After Meeting Kurt Russell!

How goes it? Big Mike here. Every year I look forward to BeyondFest in LA because they have cool movies and cool guests. This year the name circled on the list was underrated American Icon Kurt “Freakin” Russell. He’s one of the coolest dudes out there and I wish other celebs would take a clue from him on how to treat the fans. (Nicholas Cage was a late addition to BeyondFest and he was just as super cool. Read aboot it in one of Fanboy’s previous posts.) Kurt has been in a lot of flicks lately. Most notably, The Hateful Eight, Fast and the Furious 25, or whatever number they’re on, and Deepwater Horizon.

He was kind enough to be doing a Q & A panel for John Carpenter’s 1986 romp Big Trouble in Little China and I didn’t want to miss this.

I was lucky enough to get him as the same venue a few years ago and extremely unlucky to miss him there as well last year. I took up camp at one of the “standby” spots on the other side of the fence and figured I might be okay because that’s where Kurt started the first time I got him and I was in the middle that time.

I brought some figures and my Grindhouse poster that I had gotten Nic Cage just days earlier. I had it the first time I ever tried for Russell, but it was a little bulky and probably got covered, but it wasn’t my first priority that time and technically, it wasn’t this time either. I wanted my two NECA Mego style figures and two Reaction figures signed. My Jack Burton figure had been previously signed by John Carpenter last year and I thought it would be cool to get Russell on that as well as one of the Escape From New York figures they put out. Even though I had two of the same NECA figures I figured I might was well try because this guy is usually a rarity so might as well go for broke. I also had two of the Hateful Eight posters rolled up in tubes in case Kurt didn’t feel like going home and wanted to dry out all our sharpies and paint pens on our items. (Hey, one can hope.)

James Gunn, who was moderating the event, was first to arrive. Even though they had a spot for him as far away from the fans and dealers as possible he still took a few minutes to come over and sign a few things. I brought my Dawn of the Dead remake DVD and luckily he saw it and made sure to get us at the lonely part of the line. Cool. Kurt arrived not long after that and we weren’t sure if he was coming over. He then gestured over to us whilst talking to the theater staff and started making his way over. A plethora of large photos from Tombstone to Escape From New York to Big Trouble fanned their way over the fence and the madness was on. Usually it’s a who’s who of graphers, but lately it’s been a “Who the fuck are these guys?” in the mix. What can you do? Kurt kind of walked serpentine over to us and you couldn’t tell if he was going to go to the left side of the line or the right. Just what my anxiety needed. He wound up going to the opposite side and started signing away. 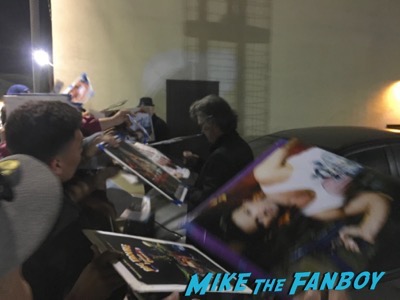 Occasionally you’d hear him say “You’re good” to someone meaning they got enough multiples. He did make his way around things and down to my side and signed my Big Trouble figure and missed the bigger figure that was taped down next to it. 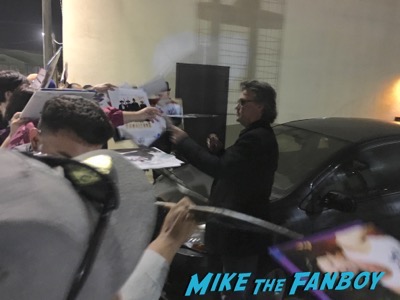 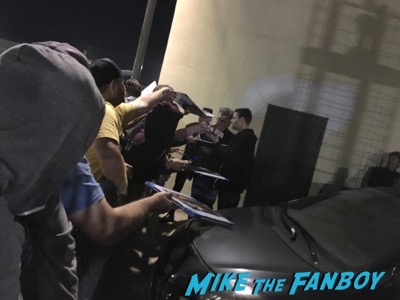 He went on to sign other people’s items and was aboot to come back to my NECA figure but something distracted him and he moved on. Kind of a bummer, but I was happy to get anything. A lot of folks left after that and I moved over to a closer spot in case he felt like signing on the way out. I had nothing else better to do anyway. I took a look at my signed figure and noticed that he signed right over John Carpenter’s autograph and that was a bummer. 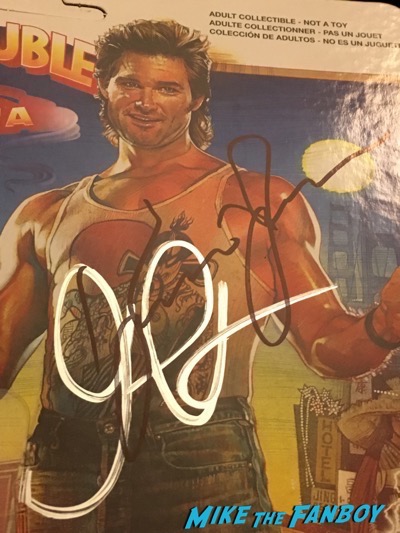 In Kurt’s defense, at certain angles in the light or lack of, you can’t tell that it was previously signed in silver. I’m not sure what to do aboot that. The bubble also started to come loose and the figure’s gun fell out somewhere which I did not notice until I got home later on. 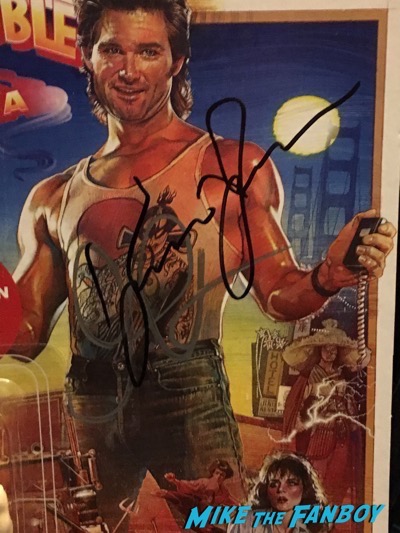 Trying my luck, I stuck around for the exits and am glad I did. Russell came back to us with a staff member doing his best to keep the multiples at bay and started his way down the line. He began by telling us he was going to take a break to say goodbye to James Gunn when he left and true to his word, he did, and went back to signing while Gunn signed for a few more dealers before parting ways. Russell got aboot a quarter of the way down before telling us he had to go. While walking away the notorious Red Bull exclaimed he couldn’t get up to the fence or stay on it, or whatever because of his knee brace and Kurt relented and came back to sign for him. The cool part was he decided to stay and finish the line. (I guess we all owe the red one for that. Thanks.) He was kind enough to switch to a silver when he got to my Snake Plissken figure and got a couple more items for some others before handing me my paint pen back. 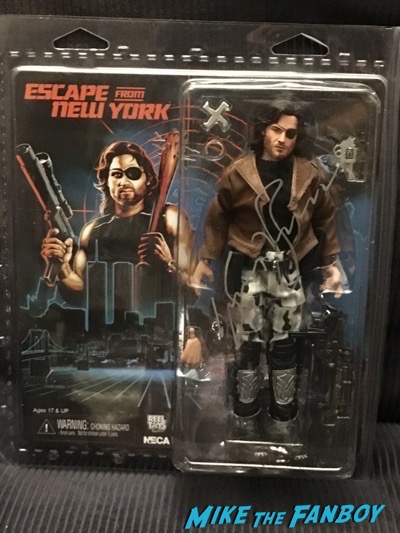 That made my night. The auto looked great and Kurt showed what a true class act he is by staying and signing away even though he wanted to head home to his hottie. Both my graphs looked great and despite one “sign-over” I was very happy to see one of my idols again being his bad-ass cool self. Check out some of his movies, he’s a fun actor with a lot of charisma. You even get to see his tushy in 1990’s Tango and Cash for all you ladies and the like out there. Until next time, stay cool and stay outta my way. 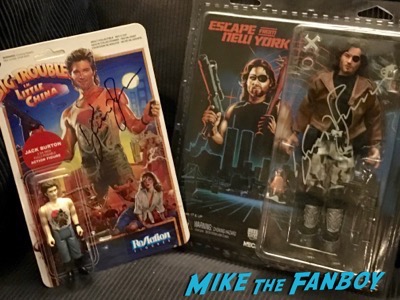