God bless Billy Beer! When I read his full days of going out autographing I get tired. Man, I’ll tell you anymore I can only do one event and I’m bushed. When Billy gets to do two, I’m like dude,… God love you!

Check out his full day of fanboy adventures after the jump!!

Welcome back to Billy’s Bar Stool! Let me just say, this autographing thing is a funny game. One moment you’re down, and the next moment you’re jumping around like a kid. That’s pretty much the story of this fanboy adventure. Like the Detroit Tiger’s relievers, it was a roller coaster ride. (Mike, the Tigers are a baseball team and their relief pitchers seem to give up a lot of runs. Sometimes they win the save the game, and sometimes they lose the game. I thought I would explain this to you since you never get my sport stories)

(Editor’s Note: I did play hockey, baseball and soccer when I was younger… Ahem… M-)

Today I feel like I’m Borat hoping to meet Ms. Pam Anderson/Lee/Richie. She did the worst on DWTS, and I’m hoping she gets booted so she’ll be out to do the post loser interview. I brought along my trusty sidekick Travo in hopes to finally meet Pam. He actually has a Barb Wire CD. He claims there were only 14 sold, so it’s quite rare LOL! The other guests are Melanie Griffith, Kerry Washington, and Alanis Morissette. Not an All-Star lineup, but I’ve heard Melanie is quite nice, and I’ve never gotten her.

When we get there, there are only about 5-10 people, which is a nice change of pace from the mobs I’ve been dealing with going out lately. Travo and I get there only to find out Kerry already signed going in. Shoot. Well, I only had one picture for her, so not that big of a deal. Melanie is next to arrive. She gives us a wave and is heading in. I yell to her if she will do it after, and she says yes. Now I know that doesn’t always mean yes, but you can at least make them feel a little guilty for not signing. I’ve actually seen celebs turn around and come back cause they did say it. Now we need to find out who got booted off DWTS……..And the Loser is ……..PAM! YES! I FINALLY guessed right. Every time I bring something for a DWTS loser, they never get the boot. I had a Hope Solo picture for 4 weeks in a row last time.

Still no Pam, and the first guest is leaving. MELANIE! She comes right over. First thing she says is you guys need some new pictures. Well wait till she sees my Cherry 2000 picture. 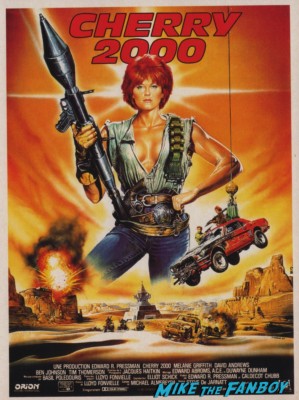 Her publicist says, “She only signs pictures of herself”

Really? Really? Really? You don’t remember being in the movie? You know it’s a drawing right? And Ms Publicist, please learn what movies your client is in. I know it came out 25 years ago, but still, it’s a cult classic. Believe it or not, she wouldn’t sign it, but she was super nice about it, and signed a blank for me after asking if I had anything else. After signing a few more things, she was nice enough to also take a picture. 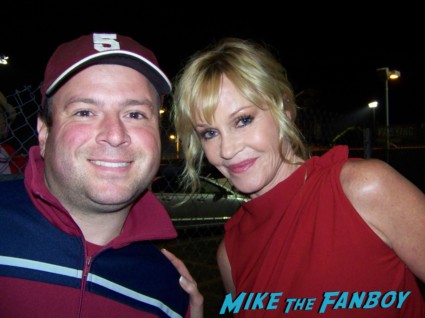 After Melanie left a big truck pulls up to drop something off, blocking all view of seeing anything. Finally the truck leaves and the guard comes over to tell us Kerry snuck out behind it. Oh well, I ask the guard about Pam, and he tells us they are interviewing her via satellite. DOH! My DWTS luck continues. C.B. is here and tells me he’s going to a Q & A where Malin Akerman and Carla Gugino are going to be. I decide to stick around for Alanis.

About 10 minutes later she comes out, but with kid. 🙁

We call for her, but this isn’t going to happen. Which I understand. I will never get mad at a celeb for not signing if they have their kids.

After a little bit of thinking Travo and I decide to meet up with C.B. I just need to get him back home in time to catch the replay of SOA. We get there after some wrong directions, and it also seems really laid back. The Q & A is still going on, so I decide to relax in my pimped out ride 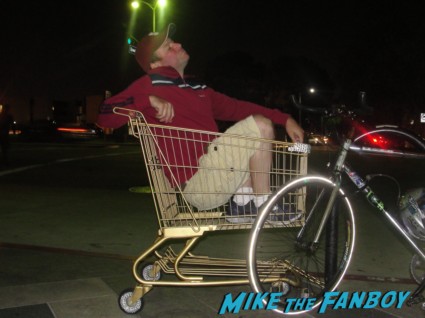 People are starting to file out, but none of the stars yet. After waiting a while, it’s starting to look grim. There are other exits to this place, we’re just hoping we went to the right exit. Finally there’s a guy walking all by himself. Robert Forster from Jackie Brown. Of the 5-10 people waiting, a few go over and get pictures and autographs with him. I’m just more interested to know if Malin and Carla are still in there. He tells one of the graphers yes they’re still there. SWEET! We wait a little longer and then we see the black dress with super blond hair. MALIN! but we see her walking to a different side. Here’s where the fun begins. All of us start running around the building.

It’s not a small building! When we get to the back, there’s nothing really there. So we start walking back to the front. Screw this, I start running. And what do I see, Malin and Carla and guests crossing the street. I go sprinting in time to cross the street and yell to them. Looking back, I probably looked like a crazy person, but both of them are SUPER nice. (which they always are anyway) Everyone else finally caught up after risking their lives through traffic. All I had was blanks, but they stopped and signed for everyone, and took pictures. 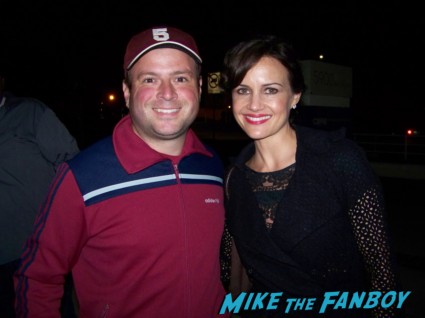 I’m sure they got a good laugh out of it too. 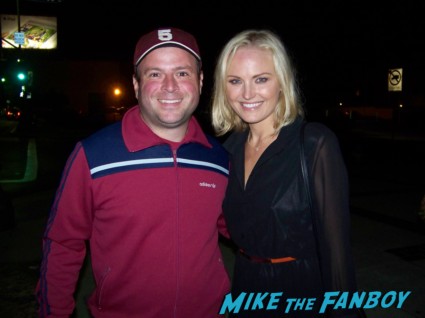